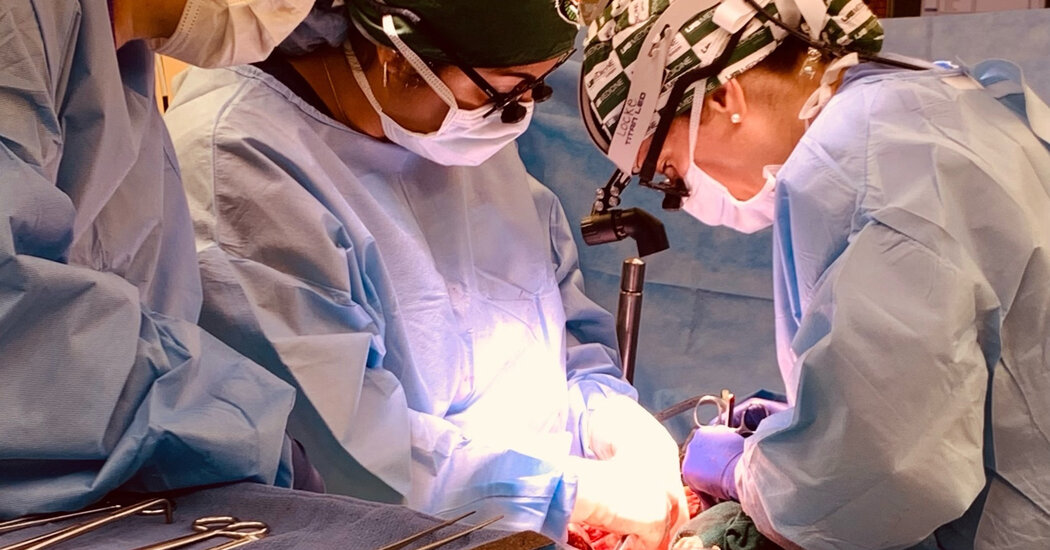 Surgeons at the University of Alabama at Birmingham reported on Thursday that they had for the first time successfully transplanted kidneys from a genetically modified pig into the abdomen of a 57-year-old brain-dead man.

The announcement was the latest in a series of remarkable feats in organ transplantation. Earlier this month, surgeons at the University of Maryland transplanted a heart from a genetically modified pig into a 57-year-old patient with heart failure. That patient is still alive and under observation.

In September, surgeons at NYU Langone Health attached a kidney from a genetically modified pig to a brain-dead individual who was being maintained on a ventilator. Though it remained outside the body, the kidney worked normally for 54 hours, making urine and creatinine, a waste product.

The U.A.B. surgery was reported in The American Journal of Transplantation, the first time a pig-to-human organ transplantation has been described in a peer-reviewed medical journal.

According to the surgical team, the pig kidneys started functioning and making urine after about 23 minutes and continued to do so for three days, though one kidney made more urine than the other.

The patients’s own kidneys were removed, and there were no signs indicating rejection of the pig organs.

Dr. Jayme Locke, the lead surgeon, said that the procedure had closely followed all of the steps of a regular human-to-human transplant operation and that critical safety questions had been addressed, laying the groundwork for a small clinical trial with live patients that she hoped to begin by the end of the year.

Many of the previous operations have been unique experiments, not part of ongoing trials.

“Our goal is not to have a one-off, but to advance the field to help our patients,” said Dr. Locke, who is director of U.A.B.’s Incompatible Kidney Transplant Program. “What a wonderful day it will be when I can walk into clinic and know I have a kidney for everyone waiting to see me.”

Alabama has one of the highest rates of chronic kidney disease in the nation: 2,348 cases per million residents. Often a result of diabetes or high blood pressure, kidney disease is most common in older adults, but it disproportionately affects people of color, women, and those with less education and lower incomes.

In Alabama, kidney disease rates are unusually high in adults ages 45 to 64. Kidney patients who do not receive transplants from a compatible donor must undergo dialysis treatments about three times a week, for several hours each time.

“Kidney failure is refractory, severe and impactful, and we think it needs a radical solution,” Dr. Locke said. She hopes to be able to offer pig kidney transplants to her patients within five years, as long as “we hit every milestone, and there are no setbacks.”

In the paper, she and the other authors thanked the family of the brain-dead individual, James Parsons, for consenting to the research and said they would name this type of study after Mr. Parsons, a registered organ donor from Huntsville who sustained his injury during a motorcycle race in September.

Relatives described Mr. Parsons as a gregarious person who loved helping people whenever he could. The family agreed to the research immediately.

“He would be thrilled so many people stand to benefit,” Mr. Parsons’s sister, Amy Parsons Vaughn, said in an interview. “So many people need a kidney.”

More than a half million Americans have end-stage kidney disease and depend on dialysis. A transplant is the best treatment for kidney failure, but an acute shortage of donor organs leaves that option out of reach for the vast majority of patients.

More than 90,000 people were on waiting lists for a kidney as of last summer. The wait can be long: Fewer than 25,000 kidney transplants are done in the United States each year, and more than a dozen people on the waiting list die each day.

Researchers have long sought to grow organs in pigs that are suitable for transplantation into humans, and in recent years new technologies like cloning and genetic engineering have brought that vision closer to reality.

Xenotransplantation, the practice of implanting animal organs in humans, has progressed in fits and starts for decades. Over the last few months, however, surgeons in the field have reported a string of new accomplishments.

At NYU Langone in September, surgeons experimented with a kidney removed from a pig that had been genetically altered so that its tissue would not prompt an aggressive human rejection response. The kidney was attached to the patient’s thigh and seemed to work, functioning as a kidney should, making urine and creatinine, a waste product, for 54 hours.

But the most stunning such procedure occurred at University of Maryland Medical Center in early January. The patient, David Bennett Sr., had exhausted all other treatment options and was given a genetically modified pig’s heart.

He was weaned from a heart-lung bypass machine on Jan. 11. He is doing well and has not rejected the animal’s organ, said Dr. Muhammad Mohiuddin, the scientific director of the University of Maryland cardiac xenotransplantation program.

The heart Mr. Bennett received was taken from a pig whose genome had undergone 10 alterations, including the removal of four genes to prevent rejection and to prevent continued growth of the organ.

In addition, six human genes were inserted into the donor pig’s genome to make its organs more tolerable to the human immune system.

The pigs were provided by Revivicor, a subsidiary of United Therapeutics Corporation, which helped fund the research and provided grant money supporting the salaries of Dr. Paige Porrett, the first author of the paper describing the kidney transplant and an associate professor of transplantation surgery at U.A.B., as well as Dr. Locke and two other study authors. Four of the other authors on the paper are Revivicor employees.

The fact that these pig organs are not being rejected is a major achievement, experts said.

“The biggest fear in the xenotransplant community was of hyper-acute immune rejection — that you put in the new organ and the body would immediately reject it,” Dr. Mohiuddin said.

Dr. Robert Montgomery, the director of the NYU Langone Transplant Institute, said he welcomed the opportunity to learn more about xenotransplantation through work done at other centers.

“I’m particularly interested in what new information we can learn about the function of the kidneys, given the significant differences in the genetic modifications and transplantation process from the studies we performed,” he said.

He and other surgeons at NYU Langone attached another pig kidney to a brain-dead patient on Nov. 22, he said.

Dr. Locke said that she had taken care to make sure that the experimental kidney operation at U.A.B. closely mirrored a standard allotransplantation, or human-to-human transplant.

The pig’s organs were removed in a sterile operating facility that meets human hospital certification standards. A compatibility test, standard before any transplant operation, was developed to make sure the brain-dead person did not already have antibodies to the pig organ that would cause rejection.

The surgeons also removed Mr. Parsons’s kidneys in order to ascertain that his urine was indeed being made by the pig’s kidney and administered only standard immunosuppressant drugs that were already widely in use in allotransplants.

“This is part of a larger program to make sure we can move this into living people in a responsible way,” said Dr. Porrett, who is director of clinical translational research for the U.A.B.’s transplant institute.

“We wanted to take the whole thing out for a test drive in a human, so that when we offer it to patients we can look them in the eye and say that we did the most we could do to make sure we know how this will work.”