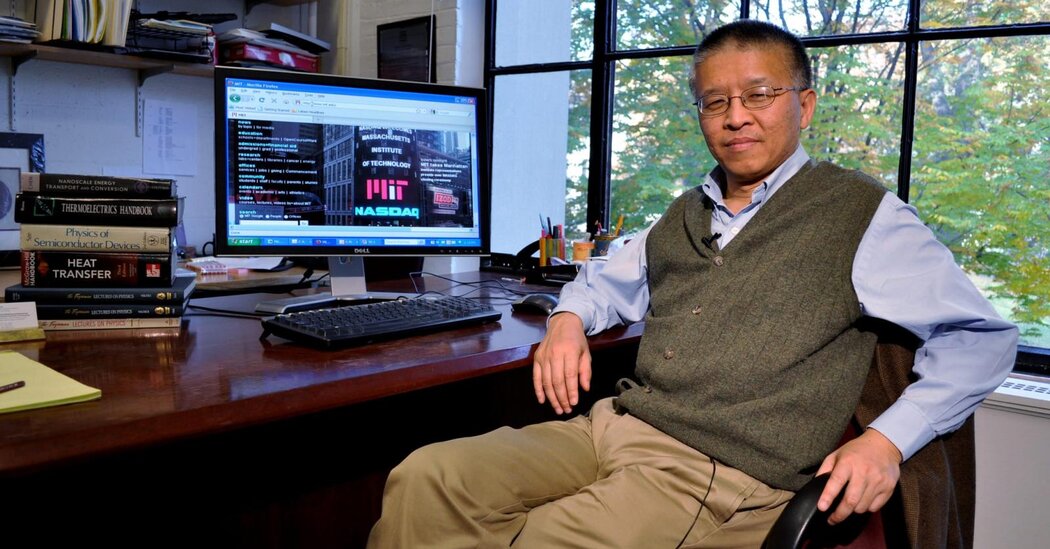 BOSTON — Federal prosecutors moved on Thursday to drop the government’s charges against Gang Chen, a professor of mechanical engineering at the Massachusetts Institute of Technology, in a high-profile setback to the China Initiative, a nearly three-year-old government effort intended to stop scientists from passing sensitive technology to China.

Dr. Chen was arrested on Jan. 14, 2021, during President Donald J. Trump’s last full week in office, and charged with a form of grant fraud, hiding his affiliations with Chinese government institutions in applications for $2.7 million in grants from the U.S. Department of Energy in 2017. He pleaded not guilty to all the charges.

Prosecutors submitted a motion to dismiss those charges on Thursday, stating that the government learned new information in the course of its investigation and “can no longer meet its burden of proof at trial.” Judge Patti B. Saris of the U.S. District Court for the District of Massachusetts is expected to rule on the motion soon.

Dr. Chen’s arrest was front-page news in Boston, a hub of scientific research. It was met with protest from many of Dr. Chen’s colleagues in academia, who said prosecutors had overreached, blurring the line between grant disclosure violations and more serious crimes like espionage or intellectual property theft.

In recent weeks, officials at the Department of Energy have told prosecutors that the department would have awarded the grant money to Dr. Chen even if he had disclosed the Chinese ties, calling into question the basis of the charges, according to people familiar with the matter.

“Today is a great day,” said Dr. Chen’s lawyer, Robert Fisher. “The government finally acknowledged what we have said all along: Professor Gang Chen is an innocent man. Our defense was never based on any legal technicalities. Our defense was this: Gang did not commit any of the offenses he was charged with. Full stop.”

Mr. Fisher credited witnesses who “came forward and told the government how badly they misunderstood the details surrounding scientific and academic collaboration,” saying “without them this case would likely still be ongoing.”

The move for dismissal comes as the Justice Department is reviewing the China Initiative, an effort launched under the Trump administration which has come under criticism for singling out scientists of Chinese heritage and for chilling the atmosphere for collaborative research.

Wyn Hornbuckle, a spokesman for the Department of Justice, said last week that the department was “reviewing our approach to countering threats posed by the P.R.C. government,” referring to China.

“We anticipate completing the review and providing additional information in the coming weeks,” he said.

The initiative has resulted in numerous grant fraud cases against academic researchers — around a dozen appear on the department’s website — and pleas and convictions, including last month’s conviction of the Harvard chemist Charles Leiber.

But the first case to reach the trial stage, against Anming Hu, a professor of engineering at the University of Tennessee, ended in acquittal last September, after a judge ruled that the government had not presented sufficient evidence that Dr. Hu had intended to defraud funding agencies. The Justice Department has dismissed seven cases against researchers in recent months.

The case against Dr. Chen, a naturalized U.S. citizen since 2000, is the most prominent one to be dismissed to date, targeting an elite scientist who had robust support from his university.

At a news conference the morning of Dr. Chen’s arrest, Andrew E. Lelling, then the federal prosecutor in Boston, said that “the allegations of the complaint imply that this was not just about greed, but about loyalty to China.” Joseph R. Bonavolanta, the F.B.I. special agent in charge in Boston, said that Dr. Chen “knowingly and willingly defrauded at least $19 million in federal grants.”

When charges were filed five days later, though, they were more limited in scope.

Dr. Chen was charged with two counts of wire fraud, for failing to disclose seven affiliations to the Department of Energy while applying for a $2.7 million grant to study heat conduction in polymer structures and in a subsequent progress report. The affiliations included serving as a “fourth overseas expert consultant” to the Chinese government, a “review expert” for the National Natural Science Foundation of China and an adviser to the Chinese Scholarship Council, among others.

He was also charged with failing to declare a Chinese bank account containing more than $10,000, and with making false statements to government officials in his grant disclosures.

In recent conversations, officials at the Department of Energy told prosecutors the affiliations Dr. Chen failed to declare would not have prevented the agency from extending the grant money, according to two people familiar with the matter.

The case was rushed in its final stages, which came in the hectic days after the Jan. 6 riot and before President Biden was sworn in, according to a few former officials, who requested anonymity to speak about an ongoing case. The department’s National Security Division had around 48 hours to review the indictment before Dr. Chen’s arrest, unusual given the high-profile nature of the case, the officials said.

In a statement, Mr. Fisher, Dr. Chen’s attorney, a partner at Nixon Peabody, said the scientist had not withheld commitments in China from the government.

“He was never in a talent program,” Mr. Fisher said. “He was never an overseas scientist for Beijing. He disclosed everything he was supposed to disclose and he never lied to the government or anyone else.”

Biden officials have met with representatives from the China Initiative’s sharpest critics, Asian American rights groups and universities, to discuss possible changes to the program.

In the coming weeks, the name “China Initiative” may be dropped, and the cases may no longer be packaged as a distinct group, but reabsorbed into the caseload of the department’s National Security Division, according to current and former Justice Department officials. After initial discussion of offering amnesty in the pending grant fraud cases, officials are leaning toward resolving the cases individually, the officials said.

Among those urging the Justice Department to back away from prosecutions based on grant disclosures is Mr. Lelling himself, now in private practice in Boston.

In a post on LinkedIn last month, he wrote that he believed the China Initiative had been intended to combat espionage but had “drifted and, in some significant ways, lost its focus.”

“You don’t want people to scared of collaboration,” he said in an interview. “There’s no question, on the academic side, the China Initiative has created a climate of fear among researchers. That is one reason why D.O.J. should step back a bit.”

He added, however, that prosecutions of academics had done some good, prompting research scientists to be far more transparent about their Chinese funding.

“If you were looking for general deterrence, it has been achieved in spades — we have terrified the entire research community,” he said. “What is deterrence? You don’t speed because you’re afraid of getting a ticket. Deterrence is about fear.”

Friends and colleagues say the prosecution had a profound effect on Dr. Chen, who served as the director of M.I.T.’s Department of Mechanical Engineering, a position that required him to raise money overseas for a range of university research projects.

“Questioning his loyalty is an outrage, and reminds us of dark periods in history,” read a letter published last year by 25 current and former M.I.T. faculty members. It went on to say that there were “many M.I.T. faculty and students of Chinese heritage who feel targeted, fearful, and intimidated.”

A GoFundMe page posted shortly after Dr. Chen’s arrest by his daughter, Karen, raised $400,000 in three days. She wrote on the page that unused funds would be donated to charitable organizations assisting other scientists facing prosecution.

“My dad is resolved to fight these charges because of the danger they represent to the broader academic community and all Chinese Americans,” she wrote.

“These are very potent weapons,” he said. “Any one of us, if those weapons are turned on you, you disintegrate. What questions can we now ask? What types of reckoning, what type of accountability, can we expect when innocent people are hurt by these weapons?”