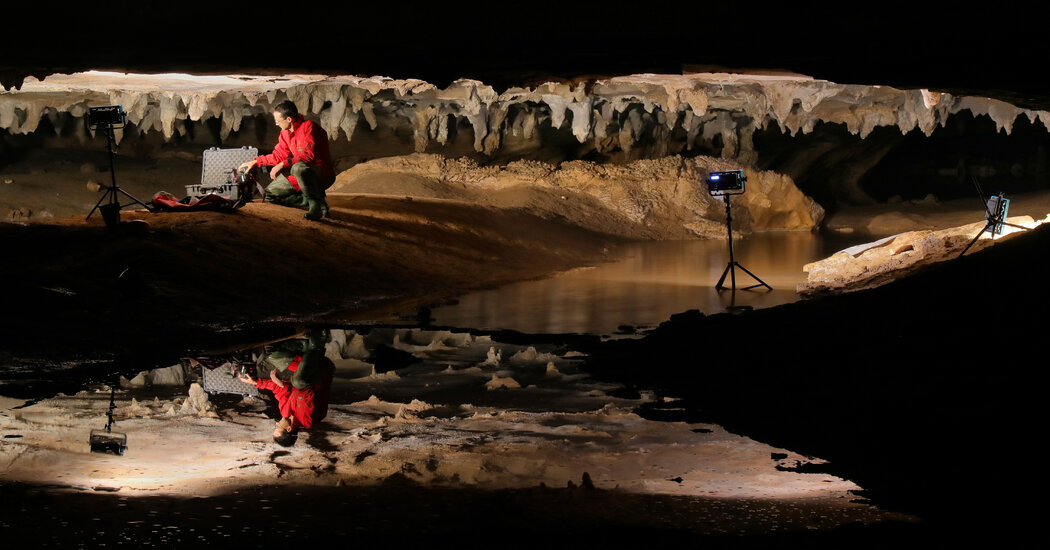 The cave meanders for two miles under northern Alabama, with passages that veer into mysterious so-called dark zones, sediment deposits, a waterfall and deep pools. Ancient footprints are embedded in its remotest passage. The names of Union soldiers from the Civil War remain scrawled on a wall.

Stooped over because the ceiling was so low, Alan Cressler unclipped a light from his helmet on July 30, 1998, and raked the beam across the surface above him.

The artwork of a fellow human being who lived many centuries ago came into view: possibly a bird, with a rounded head.

“Once I saw that, I am like, ‘OK’,” Mr. Cressler, who now works for the United States Geological Survey, said in an interview this week. “It gives me chills today to talk about it. I just recognized the immediate importance of it.”

With an archaeologist, an expert in 3-D photography and others, Mr. Cressler further explored the cave, known as the 19th Unnamed Cave, and its art over the years. This week, they published their findings in the journal Antiquity. The study highlighted the role of 3-D technology in uncovering art that was not initially visible to Mr. Cressler over 20 years ago, when he was pressed so close to the ceiling that he could not see the full array that radiated in all directions above him.

Jan Simek, an archaeologist with the University of Tennessee and a co-author of the paper, said the cave art was among the largest found in North America, deep in a convoluted dark zone where natural light could not reach.

Using radiocarbon dating and analysis of pottery shards, the researchers estimate that the art dates to the Middle and Late Woodland periods, or between 500 A.D. and 1000 A.D., when farming, hunting and gathering gave way to food production and sedentary life in the region.

There are figures with human features, a coiled snake with a tail rattle and forked tongue and a 10-foot-long serpent winding its way across the expanse. Some incorporate the features of the ceiling into their design, such as the serpent that appears to emerge from a natural fissure.

Ghostly humanoid figures are adorned in regalia. Charred fragments of river cane suggest the artwork, finely incised in a veneer of mud, could have been a team effort, with someone holding a torch while the artist, or artists, worked.

The early artists were very likely lying on sediment deposits when they made their mud carvings, either with fingers or delicate tools with tines.

“It is highly detailed,” Dr. Simek said. “It covers an acre of surface area on the ceiling. The glyphs are in a single chamber, but the cave goes on.”

Since cave art was first documented in North America in 1979, Dr. Simek and Mr. Cressler have been studying what is known as dark-zone cave art, which involves exploring passageways unreachable by natural light.

The cave documented in 1979 in Tennessee, contained mud drawings, 750 to 800 years old, depicting pre-Columbian Native American religious themes, the Antiquity study said. Since then, it said, 89 other pre-Columbian cave-art sites have been identified in southeastern North America. The earliest is nearly 7,000 years old, but most of them date from 800 A.D. to 1600 A.D.

Some are on private property, and those findings are kept secret to keep the area free of vandals. Others are on public lands, including in Virginia, Tennessee, Kentucky and Alabama. Some can be reached only by boat because rivers have risen to entrances that were once accessible by land.

The use of 3-D modeling in Alabama’s 19th Unnamed Cave “promises a new era of discovery of ancient cave art” because it reveals images that could not be perceived otherwise, the researchers said in their study.

The technique has been used elsewhere, such as to create a replica of the art in the Lascaux caves in France, but not as much in searching, as Dr. Simek said, “to see if there are things we can’t see.”

The researchers used a technique called photogrammetry, in which a camera inches along a track, taking overlapping images that are then stitched together using software. It creates a seamless representation that highlights even the finest engravings in the mud, said Stephen Alvarez, a founder of the Ancient Art Archive and a co-author of the study. He was responsible for the 3-D work in the 19th Unnamed Cave.

More than 16,000 overlapping photographs produced the map of the cave’s known art.

“It is like magic,” Mr. Alvarez said. “Here is this thing that has been invisible for 1,000-plus years that has suddenly come to life. Even though the people were removed, their stories are still here.”

The method is useful because the uneven features of a cave ceiling can throw shadows that obscure delicate lines in the art. Mr. Cressler said those features complicated his early attempts to document the work with a camera.

Dr. Simek said the use of photogrammetry was even more intriguing because ancient artists had no such technology, or opportunity, to see the big picture. Unlike with rock art, which is out in the open, the artists inside the cave chamber could not step back and ponder their work-in-progress from a distance.

“The makers of these images couldn’t see them in their totality except in their mind,” he said. “That means they had an idea of what they had to draw and to move around while they did it.”

But what exactly the artists had in mind has so far escaped the researchers.

Dustin Mater, a Chickasaw citizen and artist who works with Mr. Alvarez’s archive, said themes and images from the cave art were similar to those he had learned about in tales from tribal elders, such as cave portals to the underworld and a winged humanlike figure armed with a war mace.

“It is almost speculative, but there are nuances today that are carried forward into our traditions and in our stories,” said Mr. Mater, whose ancestors were among the Indigenous people forcibly removed from northwest Alabama in the 1800s. “Living cultures take symbols and then revivify them and give them meaning.”