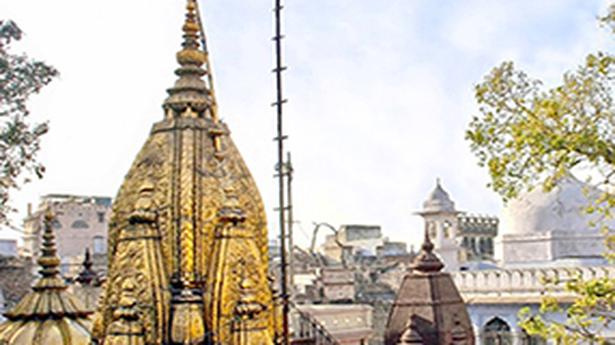 They are members of the Vishwa Vedic Sanatan Sangh, which has ‘Hindu rashtra’ as its ultimate goal

They are members of the Vishwa Vedic Sanatan Sangh, which has ‘Hindu rashtra’ as its ultimate goal

The five Hindu women who filed a suit in a local court in Varanasi demanding daily darshan and pooja of what they said was a Maa Shringar Gauri sthal (holy site) in the Gyanvapi mosque-Kashi Vishwanath temple premises are associated with a right-wing group which claims its ultimate goal is of a Hindu Rashtra.

The organisation, Vishwa Vedic Sanatan Sangh (VVSS), is involved in almost 170 cases “in interest of rashtra [nation] and dharma”  across the country at different levels of the judiciary, its president Jitender Singh Vishen told The Hindu on Monday.

Mr. Vishen is also the uncle of Rakhi Singh, one of the five women petitioners in the case, which is currently being heard in the Civil Court Senior Division, Varanasi. There were reports on Sunday that Ms. Singh would withdraw her case but she did not.

The VVSS was founded in 2013 but registered only in 2018 in Gonda district of Uttar Pradesh. Its central office is in Delhi’s Shahdra.

Mr. Vishen said all five women petitioners in the Maa Shrinagar Gauri suit were actively associated with his organisation. “All are members of the VVSS,” he said, adding that Ms. Singh, his niece, was the youth wing national working president of the organisation.

Ms. Vyas said she filed the suit as she wanted to have daily darshan of Maa Shringar Gauri and not just once a year on Chaturthi during Navratra. Asked if there was any symbolic meaning behind having all-women plaintiffs, she said: “Wherever matru shakti (maternal power) stands, success is inevitable.”

While Mr. Vishen said his organisation was involved in 170 cases across the country, none were in the name of the organisation but were operated through its executive body and different members.

The court will on Tuesday again hear the petitioners as well as the caretakers of the Gyanvapi mosque after the latter filed an application demanding that the advocate commissioner appointed by the court for spot inspection be replaced as he was acting in a “biased” manner.

The inspection work was halted on both days after mosque caretakers did not grant permission to the petitioners to videograph inside the mosque, arguing that not only was it prohibited but also that the court’s order did not specify any such exercise.

Civil Judge Senior Division Ravi Kumar Diwakar had appointed the advocate commissioner after the five women last year April filed a suit declaring that they were entitled to have daily darshan and pooja and perform all the rituals of Maa Shringar Gauri, Lord Ganesh, Lord Hanuman and other “visible and invisible deities within old temple complex” situated at settlement Plot No. 9130 in the area of Ward and police station Dashwamedh.

The plaintiffs had in their suit submitted that at the back of the western wall of the mosque, there existed an image of goddess Shringar Gauri since time immemorial. The plaintiffs had also demanded that the caretakers of the mosque be restrained from imposing any restriction, creating any obstacle, hindrance or interference in performance of daily darshanpooja, aarti, bhog and observance of rituals by devotees of goddess Maa Sringar Gauri at the site of of Lord Adi Visheshwar along with Lord Ganesh, Lord Ganesh, Lord Hanuman, Nandi and other deities.