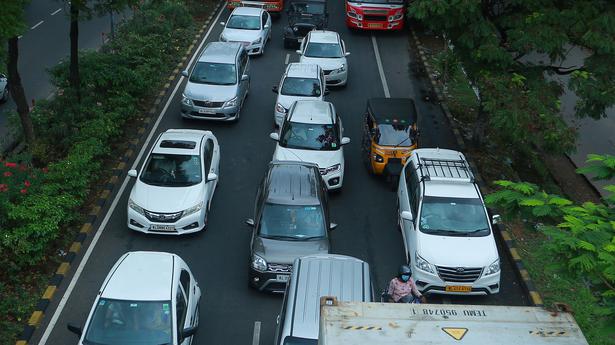 The National Highway Bypass, NH 66 and NH 544 around Edappally and the Angamaly-Aluva stretch of NH 544 are witnessing massive traffic snarls during weekends, for what traffic police and road users attribute to wide roads converging at narrow junctions.

The steep fall in the number of private buses, Kerala State Road Transport Corporation (KSRTC) buses idling at depots, and inadequate last-mile connectivity from metro stations were the other reasons for the snarls becoming unmanageable during weekends and public holidays, said traffic police officials. The increase in footfall at LuLu Mall is another reason for the worsening traffic situation at Edappally.

“The situation was so grave that the traffic hold-up from Edappally extended all the way up to Chalikkavattom near Vyttila, a distance of over 5 km. This in turn choked Palarivattom Bypass Junction and the flyover there as well, causing a cascading effect on Civil Line Road. Vehicles coming from the Palarivattom side are often forced to confine themselves to a single line as they enter NH 544, since the other lane is taken over by vehicles waiting to enter LuLu Mall. One option to lessen the snarls is to add the width of the footpath to the NH and to build a fabricated footpath on the side,” said the officials.

The annual fest at St. George’s Forane Church, Edappally, and revellers from neighbouring States arriving by busloads worsened the snarls during the past weekend.

The Mannuthy-Karayamparambu stretch of NH 544 had a width of 45 m, while the corridor from Angamaly towards Aluva and the city was 30-m wide or even lesser, said P.V. Paulson, regional chairman of Lions Club, Karayamparambu. “Thus, motorists get stuck, especially at Federal Bank Junction and at the even narrower Karayamparambu overbridge. There is urgent need to realise the long-overdue Angamaly Bypass, starting from Karayamparambu towards Ernakulam, since the NH passing through Angamaly town is too narrow,” he said.