Padayatra from Bihar to Delhi the only way out for caste census, says Tejashwi Yadav as he 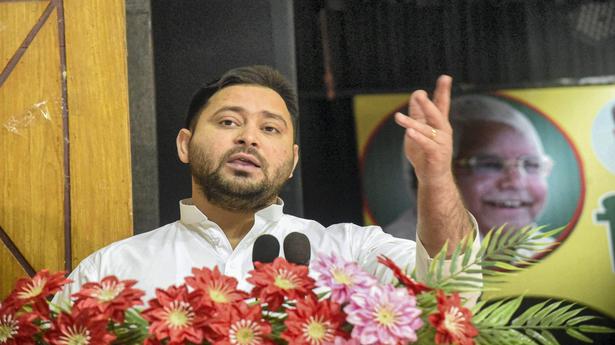 RJD leader Tejashwi Yadav on Monday declared that he will launch a padayatra from Bihar to Delhi to press for a headcount of OBCs, which the Narendra Modi government at the Centre is reluctant to undertake as part of the census.

Talking to reporters here, the Leader of the Opposition in the State claimed that it was at the instance of his party, founded and headed by his father Lalu Prasad, that resolutions in support of caste census were passed twice by both houses of the legislature in Bihar.

He was replying to questions about Chief Minister Nitish Kumar blaming the delay in a state-specific survey of castes on the corona pandemic and assuring that it will now be taken up soon.

“I can only say that it was upon the initiative of the RJD and Lalu ji that resolutions were twice passed by the assembly and the legislative council and an all-party delegation met the prime minister to press the demand for the caste census”, said Mr. Yadav, who was a part of the delegation headed by Mr. Kumar.

“Now it seems that we are left with no other alternative except hitting the streets and undertaking a padayatra from Bihar to Delhi”, the former Deputy Chief Minister said without elaborating as to whether any tentative schedule has been planned.

The latest rhetoric from Mr. Yadav comes less than a week after he had declared in the social media that RJD will “not allow any census work in Bihar” until the Centre agreed to the demand for a caste census.

The Centre has stated on the floor of the Parliament that it has no plans to take up headcount of castes other than the SCs and the STs.

The numerically powerful OBCs dominate the political landscape in Bihar. Arch rivals like Lalu Prasad and Nitish Kumar are therefore on the same page over the issue.

Mr. Kumar during his weekly outreach programme during the day iterated that an all party meeting on the caste census will be convened soon.

The last time a comprehensive caste census was undertaken was over a century ago in 1921 and OBC leaders believe that the proportion of the other backward classes in the overall population has risen since then.

Mr. Yadav, who earlier used to taunt Mr. Kumar on the delay in conducting a survey specific to the state seems to have changed the goalpost realising that such an exercise, since not carried out under the Census Act, may not have a legal validity and hence might not bring much benefits to the OBCs.