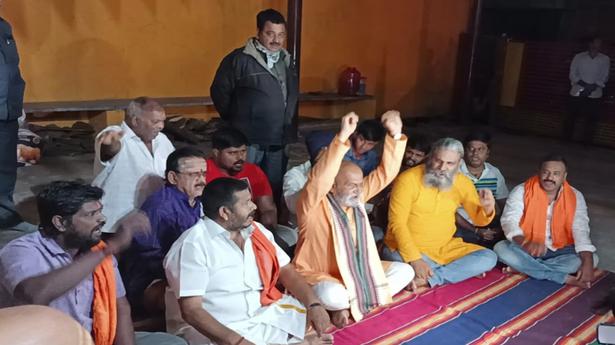 He and his supprters arrived before the crack of dawn, offered prayers and played suprabhata on the loudspeaker. They also sang devotional songs.

The Srirama Sena chief later visited the Anjaneya Swamy Temple in Agrahara, where also the suprabhata was played.

Police security had been deployed around both the temples.

Speaking to reporters later, Mr. Mutalik said the campaign was launched in the wake of the ‘failure’ of the State Government and the Muslim community to take necessary steps against the disturbance caused by the azan on loudspeakers.

He contended that no steps had either been taken to reduce the volume of the loudspeakers during the azan delivered at 5 a.m. or during the rest of the day.

He said that contempt of court petitions will be filed against the Deputy Commissioners of all the districts for not taking any action against the violation of the Supreme Court order.

Mr. Mutalik came down heavily on the BJP Government for arresting Hindutva activists in Bengaluru when they tried to participate in the suprabhata campaign. Instead of arresting people who were violating the Supreme Court guidelines, the police had arrested Hindutva activists, he lamented.

He said the State-wide suprabhata campaign launched by Srirama Sene will continue till action is taken against the sound pollution caused by azan on loudspeakers.

He said Srirama Sene had contacted about 1,000 temples across the State to participate in the campaign.