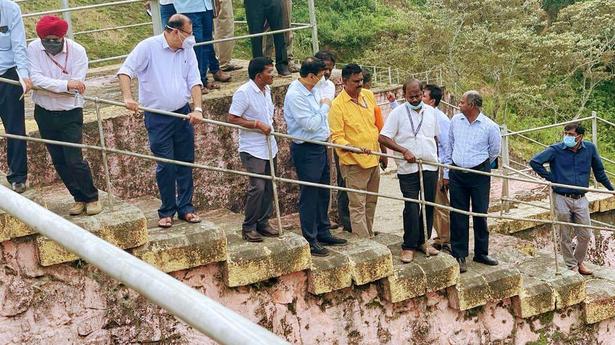 Spillway shutters opened and closed, report to be submitted to Supreme Court: official

Spillway shutters opened and closed, report to be submitted to Supreme Court: official

The supervisory committee appointed by the Supreme Court visited the Mullaperiyar dam on Monday. The visit followed a direction by the apex court to examine the functioning of various equipment installed at the dam and the working of the spillway shutters.

The shutters were opened and closed and a report will be submitted to the Supreme Court, according to an official representing Kerala.

The team moved from the Thekkady boat landing station in a boat to the Mullaperiyar dam in the morning. The team also inspected the main dam, the baby dam and the spillway shutters.

The visit assumes significance as the unexpected opening of the spillway shutters at night several times during the last monsoon caused enormous misery to the people living on its downstream areas.

The water from the Mullaperiyar dam is released through the spillway shutters to the Periyar, upstream of the Idukki reservoir.