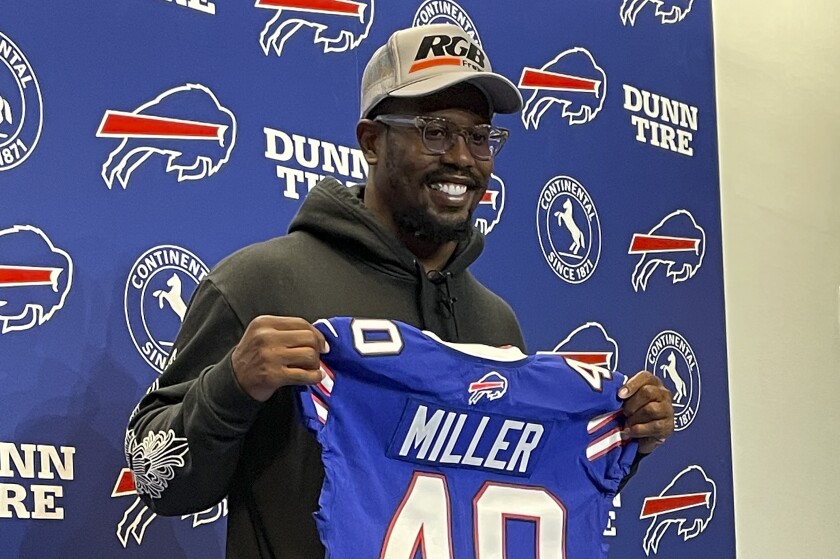 If the Rams are playing Denver on Christmas Day — as CBS announced Tuesday morning — that almost certainly means that the defending Super Bowl champions will be squaring off against Buffalo in the Kickoff Opener on Sept. 8 at SoFi Stadium.

By every indication, the NFL had zeroed in on either the Bills or Broncos playing at the Rams in the traditional Thursday night game that opens the season.

The league has not confirmed the Kickoff Opener matchup, with the full schedule release coming Thursday night.

Buffalo was eliminated from the playoffs last season in an AFC divisional overtime thriller at Kansas City.

So impactful was that Bills-Chiefs game, a 42-36 shootout in which Buffalo was denied a possession in the extra period, that the NFL changed its overtime rules for the postseason.

Beginning this season, even if the team who gets the ball first in overtime scores a touchdown on that possession, the opponent will get a chance to answer.

Whenever it takes place, Bills-Rams will feature quarterbacks Matthew Stafford and Buffalo’s Josh Allen, two of the league’s premier passers, and the added wrinkle of new Bills pass rusher Von Miller. He was a key component of the Rams’ Super Bowl run.

Buffalo had the league’s No. 1-ranked defense last season, allowing 272.8 yards per game — a yawning gap of 33.1 yards ahead of second-ranked Carolina.

This will mark the first Kickoff Opener played in California and only the second on the West Coast, as Seattle played host to the Thursday night tradition in 2014.

It was in 2002 that the NFL began kicking off the season with a single prime-time game. Two years later, at New England, the league began the tradition of the defending Super Bowl champion hosting the opener.

The league made an exception in 2019 to celebrate its 100th season, opening with the NFL’s oldest rivalry with the Chicago Bears playing host to the Green Bay Packers.

Buffalo, which has never won a Super Bowl, also has never been the visiting team in the Kickoff Opener.

Throughout the scheduling process, the NFL gave strong consideration to pitting the Rams and Denver for the opener, especially in light of the interest in new Broncos quarterback Russell Wilson. Dallas and San Francisco were also candidates to open against the Rams.

In Week 1, the Bills likely will be without star cornerback Tre’Davious White, as he isn’t likely to be sufficiently recovered from a serious knee injury suffered in late November. The team used a first-round pick April 28 on Florida cornerback Kaiir Elam.

In the most recent meeting, Allen threw for four touchdowns with an interception. The Rams clawed back from a 25-point deficit in the second half of that game, but Allen bailed out his team with a three-yard touchdown pass with 15 seconds remaining.

Buffalo led the game 28-3 midway through the third quarter.

The Rams came close to matching what would have been the third-biggest comeback in the history of the NFL’s regular season.

“We were just one step away, and unfortunately in this league that’s not good enough,” then Rams safety John Johnson said at the time. “The whole game was a weird game.”

Dodgers vs. Philadelphia Phillies: How to watch, streaming options and start time