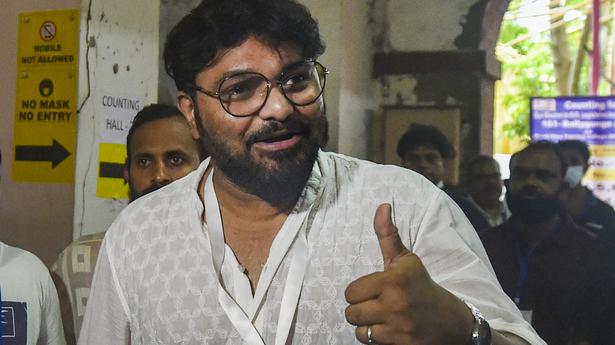 Though Supriyo was elected on April 16, confusion consequently prevailed over his oath-taking ceremony.

Though Supriyo was elected on April 16, confusion consequently prevailed over his oath-taking ceremony.

After Governor Jagdeep Dhankar insisted that he would not change his decision on who would administer the oath to Babul Supriyo who quit his job as a central Minister and the BJP party to join the TMC, it has been decided the singer-turned politician who was last month elected MLA from the Ballygunge Assembly constituency will be sworn in by West Bengal Assembly Deputy Speaker Asish Banerjee on Wednesday.

Though Mr. Supriyo was elected on April 16, confusion consequently prevailed over his oath-taking ceremony.

On April 30, the former Minister tweeted a letter he had written to the Governor on his plea. “For the sake of the people of Ballygunge, who did not have a MLA for several months since the demise of Subroto Mukherjee, I would request your excellency @jdhankhar1 ji to reverse the decision & allow Honb’le Speaker to preside over my oath taking allowing me to start my work.” Mr. Supriyo said on Twitter.

The Governor replied the next day also on the social media: “Public domain request of Shri Babul Supriyo, … seeking Governor for administration of oath by Hon’ble Speaker is not acceptable as not being in consonance with the Constitution.” In the middle of the confusion over the swearing in, Speaker Biman Banerjee had commented that the swearing-in of a public representative cannot be held ransom to conditions.

The by-election to the Ballygunge assembly seat was held on April 12, and the result was declared on April 16.

After giving up his Lok Sabha membership, which he had bagged on a BJP ticket, Mr. Supriyo was nominated by the ruling TMC for the Ballygunge Assembly seat.