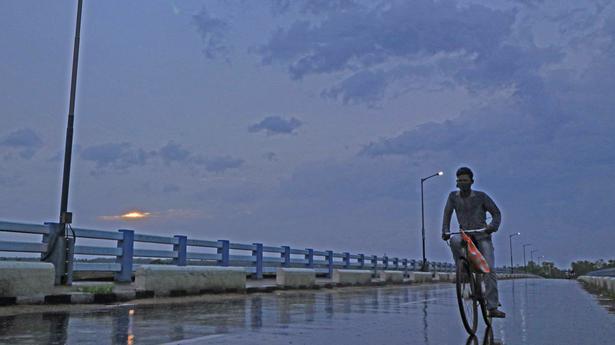 Kolkata and the adjoining coastal areas of West Bengal received brief spells of rainfall on May 10 due to the impact of cyclone Asani, but weather officials have predicted no damage to the State’s coastline from the cyclone.

“There is likelihood of no storm or sea surge along the West Bengal coast. What is being predicted is rainfall in the coastal areas of East Medinipur, and North and South 24 Parganas,” Sanjib Bandyopadhyay, Deputy Director Meteorology, Regional Meteorological Centre, Kolkata said.

The forecast till Thursday, May 12, remains “light to moderate rain/thunderstorm likely over the districts of Gangetic West Bengal”.

The weather office has issued a heavy rainfall warning on May 10 and May 11 “(07-11 cm) at one or two places over East and West Midnapore, North and South 24 Parganas and Nadia districts of Gangetic West Bengal”. The warning to fishermen to not venture to the sea remains till May 13.

Despite the relief sounded by the weather office, the Kolkata Municipal Corporation (KMC) is not lowering its guard. “We expect the cyclone to be less severe but there will be rainfall. The drainage department will be on toes. No leave will be allowed till May 12,” Mayor, KMC, Firhad Hakim said.

Control rooms have been set up by the Kolkata Police and the KMC in the wake of the cyclone alert. On Tuesday, three policemen sustained injuries after a portion of an old building came down following a downpour in Kolkata’s Rabindra Sarani.

The administration has deployed National Disaster Response Force (NDRF) in low-lying and coastal areas of the State, including Haldia and Sundarbans. NDRF teams along with the local police made announcements, urging people to stay indoors and not to venture out to water bodies.

This is the third consecutive year that West Bengal and its adjoining States are facing a cyclone in the month of May. Cyclone Amphan (in May 2020) and Cyclone Yaas (in May 2021) wreaked havoc in West Bengal and Odisha. Low-lying areas in the Sundarbans, where embankments breached during cyclones result in the inundation of large areas, have been a matter of concern for the State.