DMK will go the Congress way and perish in 10 years, says Annamalai 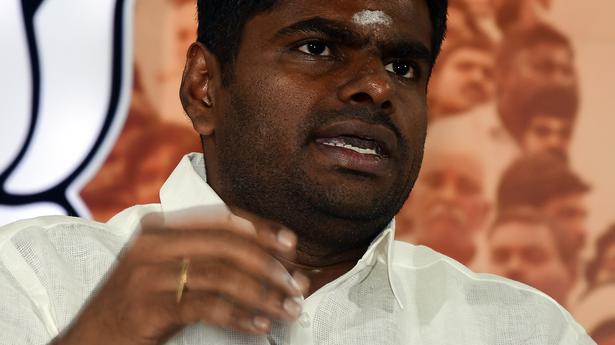 “DMK will vanish in a few years, as predicted by DMK MP [Tiruchi] N. Siva’s son Surya Siva, who recently joined the BJP. This is because the family that is running the DMK thinks the party should be dependent on it. It also thinks nobody should grow politically,” he claimed. “This is what the Congress thought 10 years ago and look where the party is now,” he said.

There was no difference between the two parties, according to him. The DMK was right now where the Congress was and in 10 years the party would vanish and thereafter political strategist Prashant Kishor would offer the very advice to the DMK that he had offered the Congress now – that non-family members should run the party, Mr. Annamalai said reacting to DMK Dharmapuri MP S. Senthilkumar’s claim that two BJP MLAs were in touch with him.

Mr. Annamalai charged the DMK had lied to the people in its election campaign by promising to revert to the old pension system for government employees. The party in the run-up to the Assembly election said one thing, but was now speaking the opposite.

This was not the DMK’s first doublespeak, he said and asked why the people should continue to trust the DMK.

On Sri Lankan financial crisis and the latest riots, he said India, which was now a board member at the International Monetary Fund, had asked for the country to be classified as a low income country by moving it from the middle income country category.

This would help the island nation have a longer loan repayment schedule. Likewise, India had also asked the IMF to extend loans to Sri Lanka on the same conditions that it was extending to the war-torn Ukraine.

The bruised nation needed a cure, which the IMF would provide. India, on its part, was only nursing the wounds and the only country doing so, Mr. Annamalai said and listed the help India had provided so far — sending medicine, food, fuel, etc.

He further said India had also built a railway system connecting Colombo with Jaffna, the Jaffna International Airport in Palaly and also a cultural centre in the Tamil city. These were to improve people-to-people ties. And, very soon there could be passenger shipping service from Karaikal and Thoothukudi to Jaffna.

Political parties in Tamil Nadu had only played politics using the Eelam issue but had done nothing to help the people there, he charged and added that the BJP would support the State government’s efforts to help the Tamils in the island nation.

In response to a question on the controversy regarding ‘Hindi imposition’ in Jipmer, Mr. Annamalai replied that the BJP’s stand was very clear — that it opposed imposition.