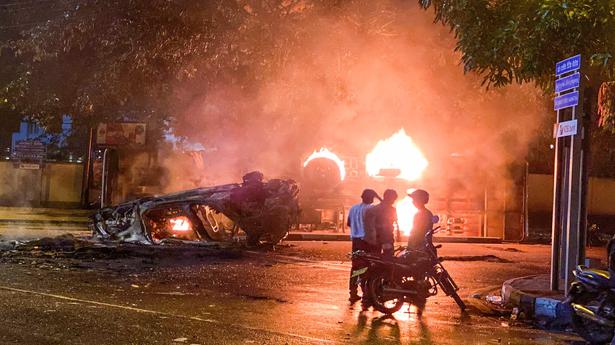 In its first reaction to days of violence that led to the resignation of Sri Lankan Prime Minister Mahinda Rajapaksa, the government on Tuesday said that India will be guided by the “best interests” of the Sri Lankan people, in a statement that made no mention of the Rajapaksa government itself. The statement signals that New Delhi will continue to provide Sri Lanka with economic support but not political support during the current crisis, prioritising people-to-people ties instead, senior officials indicated.

“As a close neighbour of Sri Lanka, with historical ties, India is fully supportive of its democracy, stability and economic recovery,” MEA spokesperson Arindam Bagchi said in response to questions about the situation in Sri Lanka.

“India will always be guided by the best interests of the people of Sri Lanka expressed through democratic processes,” he added, in a reference to street protests since early April that have turned violent over the weekend, with several homes and cars set on fire, and at least 10 people have been killed, 200 injured in clashes between political groups, and attacks by ruling party supporters.

Detailing India’s assistance to Sri Lanka in the past few months, the MEA spokesperson said that India has extended support worth more than $3.5 billion, and that “the people of India have provided assistance for mitigating the shortages of essential items such as food, medicine etc.”. The support package includes a billion dollar credit line for essential imports, and half a billion dollar line for fuel, debt payment deferrals of loans totalling a billion dollars, and a $400 million currency swap that has been extended until mid-July.

The central government and the Tamil Nadu government have also send consignments of rice and other supplies, hoping to help tide over the crisis. India has also committed to help Sri Lanka with a bailout plan from the World Bank, and Finance Minister Nirmala Sitharaman had met with Sri Lankan Finance Minister Ali Sabry in Washington during the Spring meetings in April.

A team from International Monetary Fund (IMF) has now begun negotiations with officials in Colombo over the bailout plan including tough reforms needed by the government for financial support. Sri Lanka has struggled with its balance of payments in the last few years, as its key sectors of agriculture, exports and tourism have each been hit by the Covid pandemic, the global economic downturn and the sharp rise in food and fuel prices after Russia’s invasion of Ukraine. The problems are likely to be compounded by the violence as tourists and businesses have been affected.

As public anger over the mismanagement of the situation by President Gotabaya and his brother Prime Minister Mahinda has spilled onto the streets, the Modi government has kept a close watch on the situation, but sought to keep a distance from the Sri Lankan leadership. “In a fluid political situation, it makes sense to emphasise people to people relations,” a senior official said. Apart from the instability that the situation in the neighbouring country generates, New Delhi has also been worried about a rise in refugees fleeing food shortages and other hardships on the island nation.