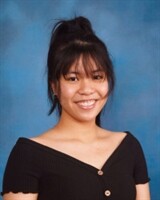 Kim Pham, the daughter of a single mother, is headed to the University of Washington on a $120,000 four-year Chick Evans Scholarship after learning how to become a caddy. Yes, it was that simple. The scholarship is a lifesaver for the senior from Fullerton Rosary Academy whose family emigrated from Vietnam.

“It takes the burden from mom being worried about college tuition, being an only child and she being a single mother,” Pham said.

Pham played volleyball and ran track early in her high school career. The scholarship will help her study to become a nurse. She said she became interested in the medical field after her father had a series of health issues before dying when she was young.

“I was in and out of the hospital a lot,” she said. “I want to help find better healthcare for marginalized groups.”

Pham traveled to Illinois to caddy at Lake Shore Country Club in Glencoe as part of the Western Golf Assn. caddy program.