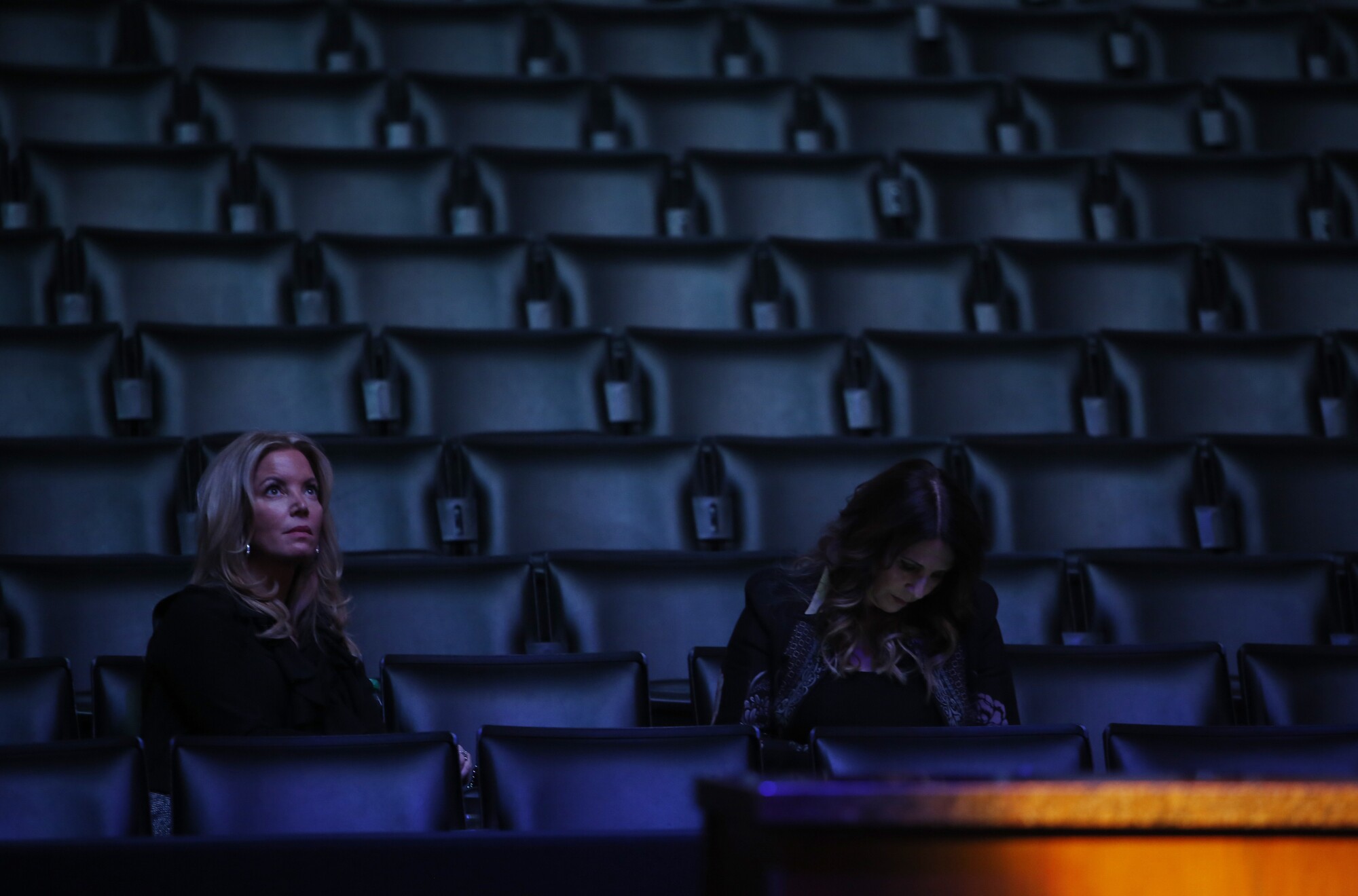 On a May Sunday afternoon when she should be watching her Lakers in the NBA playoffs amid a raucous Crypto.com Arena, she is sitting in a quiet and virtually empty El Segundo practice facility.

Her team has long since been eliminated. Her greatest of expectations became the biggest of flops. Her family’s sizable investment came up flat broke. She’s alone with her scampering Teacup Maltipoo named Delores.

“I’m growing impatient just because we had the fourth-highest payroll in the league. … When you spend that kind of money on the luxury tax, you expect to go deep into the playoffs,” she told The Times. “So, yeah, it was gut-wrenching for me to go out on a limb like that and not get the results that we were looking for. … I’m not happy, I’m not satisfied.”

You know what happened the last time Jeanie Buss was not happy or satisfied, right? It was ugly. It was powerful.

In the winter of 2017, with the Lakers stuck in a seemingly bottomless morass, she boldly did the unthinkable by firing her own brother. In one assertive swoop, she canned sibling Jim from his job as executive vice president of player personnel and fired longtime general manager Mitch Kupchak while staking her claim as the fearless controlling owner of the city’s most celebrated sports franchise.

Five years later, just two seasons after winning a 17th title, those Lakers are in the muck again, and, during an hourlong lunch chat with this columnist, Jeanie Buss again wants to make her displeasure clear.

“We don’t like to be missing the playoffs, I understand the fans anger and frustration,” she said. “I’ve got to make it better.”

Even if this means eventually making changes?

“Absolutely, if we are not living up to the Lakers standard, absolutely I will look at everything,” she said, later adding, “I will make the hard decisions, because that’s what you have to do.”

Buss agreed to this interview because, after watching a team with a handful of future Hall of Famers miss the playoffs in arguably the most disappointing season in Lakers history, she felt she had been too quiet for too long.

“I’m kind of like my dad, where it’s kind of like, let the players, let the team, be the focus, not me,” she said. “But I get that I have been kind of in the background too much for people to understand what’s going on.”

In a wide-ranging conversation, she continued to offer support of embattled general manager Rob Pelinka, but also confirmed that she is now also receiving input from historic Lakers figures Magic Johnson and Phil Jackson. She defended Kurt Rambis and Linda Rambis, but emphasized that Linda is not making basketball decisions. She expressed loyalty to LeBron James and the desire to do whatever it takes to make him happy, but bristled when asked what every fan wants to know — do James and Klutch Sports run the Lakers?

“Do they have final say? No. Are they running the team? No, no, not at all,” said Buss. “I am controlling owner of the Los Angeles Lakers, I’m held accountable for every decision that’s made here.”

In talking to her, there is a sense that while she will let her basketball executives work the summer and next season untouched, she won’t endure another playoff miss without making major changes.

Buss was so distressed to watch it all that she even acknowledged leaving her near-courtside seat early more than once in frustration.

“Yeah, it was heartbreaking to see us lose games,” she said.

She said the heartbreak must end now, and the basketball operations folks must be the ones to end it.

“This last year was extremely disappointing … it was hugely disappointing,” she said. “I feel like we let down Laker fans, and don’t want to do that again, and we’ve got to get it right.”

There is a dizzying number of people contained in that “we.”

“I’m a collaborator, that’s my nature, as opposed to a sole decision maker,” said Buss.

But all the heat has coalesced around Pelinka, who is facing a pivotal summer after struggling mightily in the two seasons since the team last won the title. There was the trading away of championship pieces such as Kentavious Caldwell-Pope and Kyle Kuzma, the failure to retain Alex Caruso, the signing of aging and brittle stars and, of course, the trade for Russell Westbrook.

Pelinka is apparently going to have at least one more shot to get it right, as Buss still fully supports Kobe Bryant’s former agent, who she put in place shortly after she fired her brother and Kupchak.

Buss would not speculate about how Westbrook fits into that roster, saying, “Having a conversation like that is premature. We have to now find the right coach to lead this team. Depending on the style of play that that coach wants to play, given the roster that we have, it all has to start to come together.”

She offered strong backing to another embattled Laker basketball exec, Kurt Rambis, who won 28% of his games in four seasons as an NBA coach and whose increased influence has been met with public derision.

“I know that there’s been some unfair criticism of Kurt Rambis,” she said. “I want to remind people, he’s been involved in the NBA for close to 40 years, that he has been a part of championship teams both as a player and assistant coach, he is someone I admire for his basketball knowledge.”

Buss also offered a strong endorsement of Linda Rambis, Kurt’s wife and longtime Buss friend and confidant. There are reports that Linda Rambis has input on basketball decisions, stories that Buss vehemently denied.

“In terms of Linda Rambis, she does not have a role in the basketball department; her role is, as it’s been for the last almost 40 years, is as my advisor,” Buss said. “She and I have worked together for years and years and years. Why that has become an issue for people, I don’t understand.”

Buss was reminded of the murmurings from basketball insiders claiming Linda Rambis was involved in free-agent signings. She responded that Linda Rambis deals with players only after they sign, helping them and their families adjust to life in Los Angeles.

“Every team has somebody like that, in our case it’s Linda. … She’s done that for over 30 years with the Lakers,” Buss said. “Not like all of a sudden she’s become the assistant general manager, that’s not true.”

There are, indeed, enough unofficial Lakers assistant general managers already. In these trying times, the collaboration cab just became a little more crowded with the addition of Magic Johnson and Phil Jackson.

Wait, didn’t Johnson walk out on Buss at the end of the 2019 season? Yes, he did, but Buss is infamous for not holding grudges, and so Johnson is once again wielding some influence.

“It was a big surprise,” she acknowledged of Johnson’s spontaneous decision to quit and ensuing criticism of the team. “I appreciate his honesty, I kind of wish it was just a little bit different.”

However, she said, “I would never want him to stay in a job where he wasn’t happy.”

So is she relying on him again? “Absolutely,” she said.

She is also getting input from Jackson, a five-time Lakers title coach and her former boyfriend who spends several months a year in Los Angeles. He has become another one of her confidants during this tough stretch.

Then there’s the guy who may have more influence than anybody, and Buss will absolutely not apologize for listening to LeBron James.

“It’s normal when you have a top player or players you bounce things off of them, I think that’s smart business,” she said.

It is also clear that if James wants to leave the team, either this summer or after his contract expires next year, it will be of his own volition. Buss wants to keep him happy enough to remain a Laker and is excited about him breaking Kareem Abdul-Jabbar’s scoring record next season.

“I want him to feel confident in the team, that we have the pieces to win a championship,” Buss said. “He has to be happy. … I want to make sure that he’s happy.”

Besides, she believes the Lakers can win another championship with James and Anthony Davis as their cornerstones.

“There’s no reason for me to think we can’t win with them,” she said. “Something that I learned from Phil Jackson is that there’s always a path to success. … Sometimes it might be a little bit harder than other times, … but you have to see the ability.”

Jeanie Buss is seeing that ability and will hold her employees accountable to see the same thing.

“I want Lakers fans to be optimistic that we’re going to get the team back on track just as they expect,” she said. “We want to make sure we live up to the Lakers’ past as we go forward into the future.”

During this conversation, it is once again clear how much Buss truly does love the Lakers fans. One can be critical of her collaborative philosophy and of her undying loyalty to family and friends, but one cannot ignore her devotion to her customers. Buss remains one of the only NBA owners who, despite a spate of death threats, still insist on sitting in a seat where fans have full access to her. She is surely the only owner who, even during the worst of seasons, mothers will approach and place their most precious possession in her lap.

“It’s a hostile world out there and you have to be careful … but I don’t want to lose that feeling of being accessible to the fans,” she said. “One of the last games, a woman came over with her baby, and she stuck her baby in my arms so I could take a picture with her baby. … The baby was head-to-toe Lakers.”

She added, “That’s the most important thing to her is her child, and the idea that she would want her child identified as a Lakers fan even at 6 months old, and that she wanted a photo of me with her child, that’s the greatest compliment that you could get, and I’m not going to turn away from that.”

All of which serve as an answer to a question that has lingered in the nine years since Jerry Buss’ death.

Will Jeanie Buss ever consider selling the Lakers? What do you think?

“In terms of selling the team, I’m not going anywhere. This is exactly what my dad asked me to do,” she said, adding, “The team is not for sale.”

She said it’s about far more than an investment, it’s about a journey laid out by Jerry Buss when he handed her the keys.

The path had gotten tough, but Jeanie Buss insists — and history has proved — that she can be tougher.

“This was something that was important to him, that he wanted me to keep the Lakers in the family,” she said. “I like to say, my dad had his children, but the Lakers were his baby, and he put me in charge of the baby, and I will make sure that the baby thrives.”