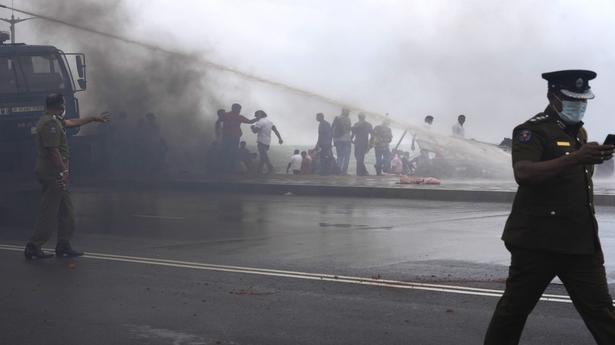 According to gazette notification, the resignation was accepted and Cabinet stands dissolved.

The rupee on Monday fell to an all-time low of 77.44 against the U.S. Dollar due to a sell-off in equities amid concerns around weakening global economic growth prospects, outflow of dollar and on fears of further tightening of monetary policy by central banks to counter rising inflation. The previous closing low for the rupee was 77.09, witnessed on March 07, 2022.

The Delhi Police on Monday registered an FIR against AAP MLA Aamanatullah Khan and his supporters for allegedly obstructing an anti-encroachment drive in Shaheen Bagh, officials said. The South Delhi Municipal Corporation (SDMC) lodged a complaint with the police against Mr. Khan and his supporters, accusing them of obstructing its anti-encroachment drive in Shaheen Bagh on Monday.

A blast occurred on Monday at the Punjab Police Intelligence Bureau headquarter at Mohali in Punjab’s Sahibzada Ajit Singh Nagar, shattering a few windowpanes. No casualties were reported. The Police said that no damage has been reported and the area has been cordoned off. The explosion was heard at 7:45 PM in which no is reportedly hurt.

Days after communal clashes broke out in north-west Delhi’s Jahangirpuri, the Station House Officer of the area has been transferred, officers said on Monday. The police termed the transfer “routine”. The outgoing SHO, Rajesh Kumar, had submitted an application three months ago stating he did not wish to continue as the Station House Officer and had sought a transfer, an officer said.

The basic issue with China remains resolution of the border and what is seen is China’s intent to keep “the boundary issue alive”, according to Army Chief Gen. Manoj Pande. In eastern Ladakh, India’s aim and intention, as far as the situation was concerned, was to restore the status quo ante prior to April 2020, he said.

No magic wands to turn around Congress: Sonia Gandhi

The CWC met to formalise the agenda of the three-day long  Nav Sankalp Chintan Shivir in Udaipur from May 13. Making her opening remarks, Ms. Gandhi noted that the brainstorming meet should not be reduced to a ritual and urged her colleagues to repay their debt to the party in full measure.

The CJI, in an unprecedented judicial criticism of the government’s abuse of the sedition provision in the Indian Penal Code, had questioned the government’s reliance on a colonial law, which was once used by the British against Mahatma Gandhi and Bal Gangadhar Tilak, even 75 years after Independence.

Russia remains grateful for India’s contribution in the Second World War (WWII), said the Russian Ambassador to India as he called on all countries, including India, to “stay united” against “hidden geopolitical agendas”, in a special message issued on “Victory Day” (V-Day) to mark the end of the WWII in 1945.

Rupee’s plunge to ₹77.4 to a dollar and further will bring unprecedented challenges, warns Rahul Gandhi

After ₹100 for a litre of petrol and ₹1000 for one liquefied petroleum gas (LPG) cylinder, it’s now the Rupee’s turn to march towards 100, former Congress president Rahul Gandhi said on Monday as the currency touched a new low against the US dollar.

The initial public offer (IPO) of the Life Insurance Corporation (LIC) of India closed successfully on Monday evening at 7 p.m. and is expected to yield about ₹20,500 crore to the exchequer, top finance ministry officials said.

The independent MP and her husband were held by Mumbai police after they said they would recite ‘Hanuman Chalisa’ outside Uddhav Thackeray’s residence.