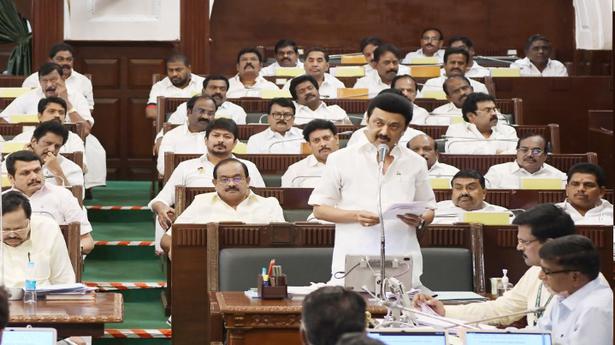 Police personnel have been instructed against unnecessarily torturing people psychologically and physically, who are taken to police stations for enquiry but to follow the guidelines framed by the Supreme Court in this regard, Tamil Nadu Chief Minister M.K. Stalin said in the State Legislative Assembly on Tuesday.

“Members of the House are aware of the swift steps over ‘lock-up deaths’ which happened recently. This government does not attempt to cover up anything. As far as we are concerned, we have issued strong instructions to prevent ‘lock-up deaths’ in the future,” Mr. Stalin said.

Replying to the debate on the demand for grants on Home Department, Mr. Stalin said there were eight police custodial deaths during 2017, 12 during 2018, 11 in 2019, six in 2020, five last year and four so far this year. “These deaths under any governments cannot be justified,” he said.

Persons arrested by the police should not be handled with personal grudge against them, he said. Since most of the crimes are circumstantial, police should undertake efforts to make the accused persons realise their mistakes, he added.

“Even if a policeman somewhere committed a mistake, allegations would be made against this government. Even if we take action against him, it would be spoken as if it is a blot on this government. So, every police personnel should function without giving scope for any such criticism,” he appealed.

Only because the law and order situation was maintained well, industries that went out of the State were now returning to Tamil Nadu, the Chief Minister contended.

He has instructed the police personnel to control those who intend to instigate violence on political, communal or caste lines, with an iron fist.

“Under this government, there has been no violence, no caste-related clashes, communal clashes did not arise, no shoot outs, no atrocities. This has been this government’s biggest achievement,” Mr. Stalin said.

Students falling for psychotropic substances was worrisome, the CM said and advised police personnel to stop the sale of gutkha and to control its movement with an iron fist. Though about 2,483 persons detained under the Goondas Act were released during the erstwhile AIADMK government, the figures have come down under this government, he said.

During the past one year, about 53% of criminal cases have been solved and properties worth ₹144.03 crore have been recovered, the CM said. While 1,695 murders were reported between May 2020 and April 2021 under the erstwhile AIADMK government, the figures were 1,558 under his government, he said.

Countering the charge made by Leader of the Opposition Edappadi K. Palaniswami that false cases were being foisted against the AIADMK partymen, including its IT Cell, Mr. Stalin said if that charge was true, cases against them would have been registered every other day.