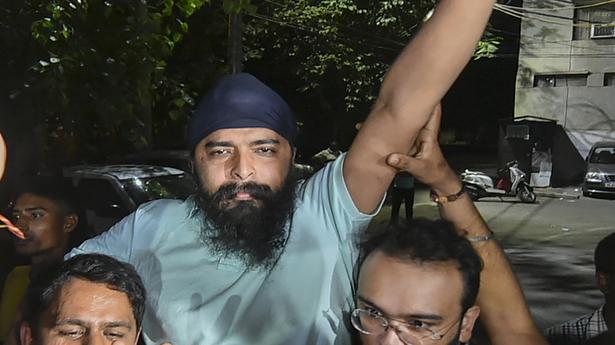 In a reprieve for BJP leader Tajinder Pal Singh Bagga, the Punjab and Haryana High Court on May 10 stayed his arrest till July 6 in a case of allegedly making provocative statements, promoting enmity, and criminal intimidation.

No coercive action will be taken against Mr. Bagga till July 6 when the case will come up for hearing next, Additional Solicitor General Satya Pal Jain, who appeared on behalf of the Delhi Police, said after the court heard the matter.

“During this (till July 6), the investigation will continue, but if a statement of Bagga is to be recorded [by Punjab Police] that will be done at his [Delhi] residence in presence of his lawyer..,” he said referring to the order passed by Justice Anoop Chitkara. On May 7, the High Court had directed that no coercive step be taken against the Delhi BJP leader after he sought a stay on the arrest warrant issued by a Mohali court earlier in the day.

The court of Judicial Magistrate, Mohali, Ravtesh Inderjit Singh had issued the arrest warrant against Mr. Bagga in connection with a case registered last month.

The Punjab Police had booked Mr. Bagga on charges of making provocative statements, promoting enmity, and criminal intimidation. The case was registered on a complaint of AAP leader Sunny Ahluwalia, a resident of Mohali.

The FIR registered on April 1 referred to Bagga’s remarks on March 30, when he was part of a BJP youth wing protest outside the residence of Delhi Chief Minister Arvind Kejriwal.

Bagga was arrested by the Punjab Police from his Delhi home on Friday last, stopped in Haryana while being taken to Punjab, and brought back to the national capital by Delhi Police hours later.

Puberty Starts Earlier Than It Used To. No One Knows Why.