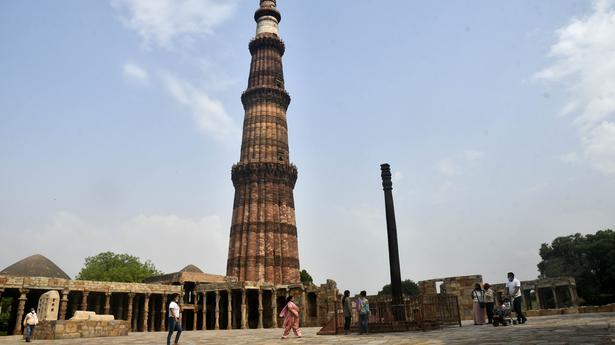 Members of a right-wing group on May 10 recited the Hanuman Chalisa outside the Qutub Minar complex and staged a protest demanding that the iconic monument in New Delhi be renamed ‘Vishnu Stambha’.

At least 30 demonstrators have been detained and taken to a police station, from where they will be released later, a senior officer said.

“They were detained because they cannot protest in the middle of the road causing traffic snarls, thereby creating inconvenience for commuters,” the police officer said.

International working president of the United Hindu Front, Bhagwan Goyal, claimed that the Qutub Minar is the ‘Vishnu Stambha’, which was built by the “great king Vikramaditya”.

“But later, Qutubuddin Aibak claimed credit for it. There were 27 temples in the complex and those were destroyed by Aibak. Proof of all this is available as people can find idols of Hindu gods kept in the Qutub Minar complex. Our demand is that Qutub Minar should be called Vishnu Stambha,” he told PTI.

Mr. Goyal claimed that idols are kept at different spots in the complex and demanded that they should be kept in one place and “we should be given the right to worship there”.

“We have given a memorandum of our demands to Union Home Minister Amit Shah and Union Tourism Minister G Kishan Reddy,” he said.

He said that Tuesday’s Hanuman Chalisa recitation and protest programme was to highlight the demand of several Hindu groups.

Mundka building fire was due to short-circuit, reveals preliminary enquiry