Shivkumar Sharma: a sound of spirituality from the Valley 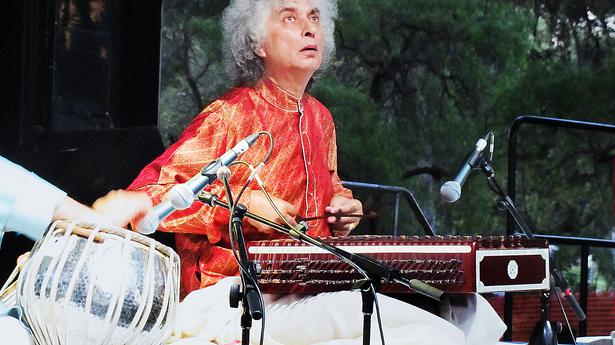 Over the years, santoor and Shivkumar Sharma had became synonymous.

Over the years, santoor and Shivkumar Sharma had became synonymous.

Pandit Shivkumar Sharma, the maestro who etched an image of the Kashmir Valley and a sound of spirituality every time he struck a chord on his santoor, transcended for a divine concert on Tuesday.

A symbol of the Shaivite and Sufi tradition of Jammu & Kashmir, the Padma Vibhushan toiled to make the folk instrument acceptable on the classical firmament. When critics said santoor was not fit for the meends and gamaks, Sharma made it possible through his striker, without indulging in any fancy experiments. A master of both ragdaari and riyaz, his solo concerts drew crowds and his discs broke records. Over the years, santoor and Shivkumar Sharma became synonymous.

If his charismatic persona raised the heartbeats, his sublime santoor invariably soothed the frayed nerves of the city dwellers. He would etch images of the breeze caressing the grass in the valley, of flocks of sheep grazing, and a shepherd meeting a young girl in the shikara, all on his modest instrument that is said to have emerged from Shahtha Tanti Veena and later came under the spell of Sufi music.

Born in Jammu to musician Uma Dutt Sharma, who worked in All India Radio, Sharma started as a tabla player but his father wanted him to take up santoor and realise its potential.

An introvert, santoor suited Sharma because of its soft, spiritual appeal that doesn’t seek attention. He had the rare ability to separate the man from the artist and perhaps that is why he could critique his performance, even when he was playing on stage. Claps never mattered to him as once his santoor was tuned for the evening, Sharma would become one with himself. He would often say, an artist should become a drashta (onlooker) on stage and would advise the audience to listen and not applaud for the stature of the artist.

Though he could invoke all the ragas, Sharma’s favourites were those that evoked romance and its pathos, like Jhinjoti. Perhaps, that’s why filmmaker Yash Chopra turned to him and flutist Hariprasad Chaurasiya for composing music when he made a shift from action to romantic films.

From Silsila to Darr, the duo tuned a young India to the idea of love and separation, never hurting the sentiments of the purists, seldom leaving the commoner out of their canvas. Be it “Dekha Ek Khwab” or “Jadoo Teri Nazar”, the tune is enough to make the hearts go aflutter. Their folk compositions like “Rang Barse” and “Mere Haatho Main” continue to be in great demand during festivals and weddings.

Sharma and Chaurasiya met in the late 1950s and gradually struck a bond that resulted in a hugely popular album Call of the Valley that spurred a craze for instrumental music and resulted in several copycats. Both played sweet instruments that needed space on the classical podium. Both contributed to background music in films and were in demand but both wanted more from life.

Sharma started his career with V. Shantaram’s Jhanak Jhanak Payal Baje. He was even offered an acting part by Khwaja Ahmad Abbas but the pull of the glamour world was not enough to wipe off the promise he made to his father.

A man of measured words, Sharma carried a regal aura around him. The hairstyle that created a kind of halo around him was perhaps inspired by Sathya Sai Baba whom he followed.

Sharma had a jovial side too but he opened up only to those who were part of his inner circle. For the lackeys that come with fame, the message was clear: this far and no further. Journalists had to be prepared before they could approach him and he could judge his audience by their body language. During a Mumbai concert, when the host asked what raga he would play, the maestro said, “what’s in a name, just close your eyes and listen.”

But, he was always open to the seeker. As a young man, he traveled across the country in a customised bus with fellow musicians to understand his country and take classical music to the masses.

He loved his food but not at the cost of practice. When in a mood, he would end up consuming cold food. Those close to him say that when they sent him his favourite fish, it was with the note that he should heat it before consuming it.

Sharma would be remembered for taking santoor out of Kashmir and making it a global phenomenon. His son Rahul would take forward his legacy but that bewitching smile that surfaced on his face every time he got the right answer to the question he posed to the tabla accompanist will remain etched in the memory of music lovers.

A Boxed Set for the Birds Hopes to Save Them, Too

Hear the Weird Sounds of a Black Hole Singing