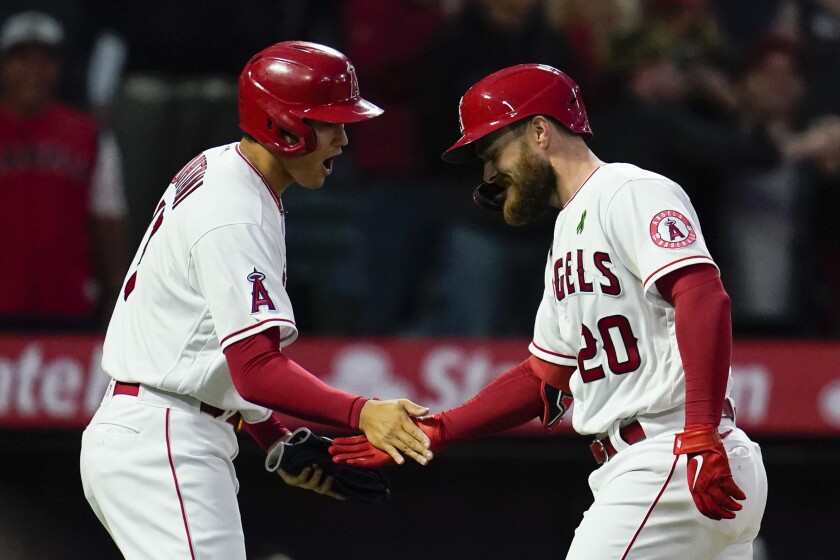 Tampa Bay manager Kevin Cash might have been wise to take a page out of Joe Maddon’s playbook and walk Shohei Ohtani intentionally with the bases loaded in the seventh inning Monday night, just like the Angels manager did with Texas Rangers slugger Corey Seager on April 16.

Instead, Cash could only watch helplessly as Ohtani crushed a grand slam to left-center field to cap a five-run outburst that propelled the Angels toward an 11-3 victory over the Rays before 19,537 in Angel Stadium.

Ohtani’s 413-foot shot on a 3-and-1 cut-fastball from reliever Calvin Faucher was the two-way star’s first-ever grand slam — in Japan or the major leagues. He also hit a solo shot to left-center in the sixth inning, giving him eight multihomer games in his big league career and six homers on the season.

Chad Wallach, the Yorba Linda native who was making his first-ever start for the Angels, led off with a single to right, No. 9 batter Andrew Velazquez walked and Brandon Marsh reached on a bad-hop infield single.

Trout walked with the bases loaded to force in a run, and Ohtani sent his 109.8-mph drive over the wall in left-center to break open the game, helping the American League West-leading Angels (20-11) move nine games over .500 for the first time since June 9, 2018.

The offensive eruption backed another strong start by Noah Syndergaard, who limited a club that had won 13 of 18 games to one run and seven hits in 51/3 innings, striking out seven and walking one.

Syndergaard, as he has in all five starts this season, effectively mixed his 94-mph fastball with his 89-mph changeup, 83-mph slider and a nifty 76-mph curve with his fastball to improve to 3-1 with a 2.45 ERA this season. Of his 97 pitches, 31 were changeups. He induced 15 swinging strikes and got 14 called strikes.

Syndergaard, who has gone five or more innings and given up three runs or less in all five of his starts, escaped a second-and-third, no-out jam in the second when he struck out Randy Arozarena with a 93-mph sinker, Brett Phillips with a 75-mph curve and got Mike Zunino to ground out to first.

The Rays took a 1-0 lead in the fourth when Syndergaard caught too much of the plate with a 92-mph fastball to Arozarena, who lined it into the right-field seats for his first homer of the season.

But the Angels, with the help of a twilight sky, rallied for three runs in the bottom of the fourth off Rays left-hander Jeffrey Springs, who had retired the first 10 batters before Trout grounded a one-out single to left.

Ohtani followed with a towering fly ball to shallow center, but Kevin Kiermaier, the three-time Gold Glove Award-winning center fielder, didn’t see it off the bat and couldn’t find it in time to make the catch, the ball dropping for a single.

Anthony Rendon lined to left for the second out, but the left-handed-hitting Jared Walsh crushed a 92-mph fastball 427 fee to center for a three-run homer, his fourth homer in six games, for a 3-1 lead.

He is batting .333 (eight for 24) with a homer and seven RBIs against left-handers this season.

“He never complained [about being benched against left-handers],” Maddon said. “He’s the kind of guy who’s going to do something about it, and he has. Give him credit for being a fighter.”

The Angels pushed the lead to 6-1 in the sixth when Marsh singled, Trout lined his two-run homer over the short wall in left field and Ohtani homered to left-center. Trout’s homer was his 161st in Angel Stadium, giving him the franchise record over Tim Salmon.

Griffin Canning, on the 60-day injured list because of a stress reaction in his lower back, threw a two-inning, 30-pitch simulated game Monday.

He is on track to begin a minor league stint within two weeks and expects to be ready to return around June 6, the day he is eligible to be activated. … Taylor Ward’s right hamstring tightened up while running the bases Sunday, and the right fielder did not play Monday night.