Telangana ahead of others in NCD screening: Harish Rao 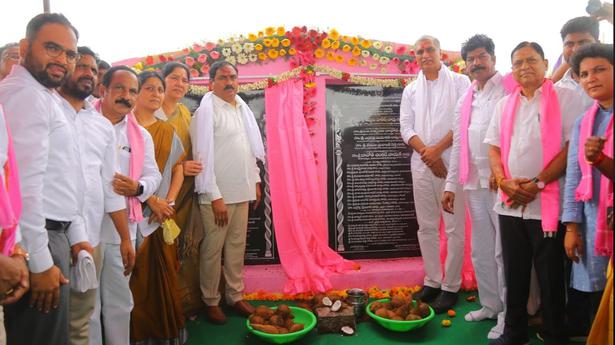 Minister for Health and Finance T. Harish Rao on Tuesday said Telangana is ahead of other States in non-communicable disease (NCD) screening as it has been done for about 1 crore population so far. He urged people to avail the opportunity to get screened and control their health problem by using the medicine kit being supplied by the State government free of cost.

Mr. Harish Rao, along with Minister for Panchayat Raj and Rural Development E. Dayakar Rao, Minister for Tribal, Women and Child Welfare Satyavathi Rathod, local legislator B. Shankar Naik and chairman of Telangana State Medical Services Infrastructure Development Corporation Errolla Srinivas, laid the foundation stone for a building for the district hospital at Mahabubabad and other buildings for a medical college coming up at a cost of ₹550 crore.

The expansion of district hospital would increase the bed capacity from 100 to 650 and the number of doctors from 10 to 100, the Minister said. He also assured to upgrade the Maripeda and Torrur hospitals. He alleged that the BJP government at the Centre had sanctioned a total of 157 medical colleges for several States, but not even one for Telangana.

Mr Harish Rao inaugurated the radiology services wing, 41-bed general ward and a dedicated paediatric care unit at the district hospital. He stated that Telangana had only three government medical colleges in 65 years, but their number went up to 33 in seven years since the State formation. Similarly, medicine course seats in the State went up to 2,840 from 700 in seven years and it would further go up to 5,420 in the next two years.

Accusing the BJP and Congress of conspiring to harm Telangana’s interests by working together against the ruling Telangana Rashtra Samithi and trying to divide the people. Referring to BJP president J.P. Nadda’s recent remarks that Kaleshwaram project had not irrigated even one acre afresh, Mr. Harish Rao suggested the BJP leaders to visit DBM 48 (canal) to see the Kaleshwaram water reaching there.