Thrissur keeps its date with Pooram after 2 years 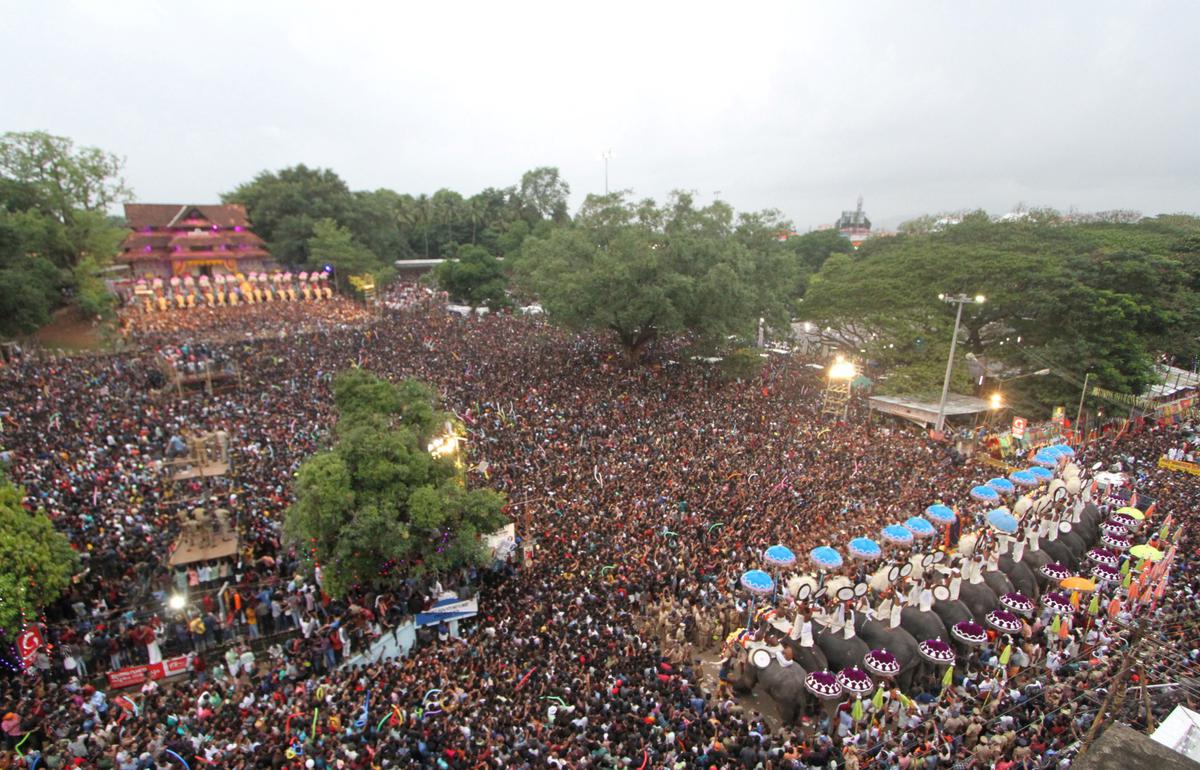 Thrissur An unprecedented crowd, literally a sea of humanity, converged at the Thekkinkadu Maidan in the heart of the city to savour the fun and frolic of the Thrissur Pooram on Tuesday. Celebrated after a gap of two years, people thronged the
maidan to soak in the carnival spirit.

Celebrated with full-fledged rites, customs, and festivities, the Pooram kept its promise to be picture perfect. Even mild drizzles that began during the Kudamattam ceremony added to the carnival spirit. The religiously conservative, yet headily carnivalesque Thrissur Pooram is a curious assortment of ceremonies, traditional ensembles, pyrotechnic shows, and elephant parades.

In a ceremonial way, the Thrissur Pooram marks the processions of deities from 10 participating temples to the premises of Sree Vadakkunnathan Temple. The main participants of the 36-hour festival are deities of the Thiruvambadi and Paramekkavu temples.

A huge crowd watches the Kudamattam ceremony of the Thrissur Pooram at Thekke Gopura Nada on the Thekkinkadu Maidan on Tuesday.
| Photo Credit: K. K. Najeeb

Unique in its spectacle, rituals and participation, the Pooram attracts large masses of devotees and spectators from across the world. Over the years, the festival has become a socio-religious event and carnival put together.

It has to offer something for all. You get to hear the State’s best traditional ensembles at the Pooram. It offers the best traditional music (Chembada Melam, Pandi Melam and Panchavadyam).

Peruvanam Kuttan Marar, Kizhakkoott Aniyan Marar and Kongad Madhu, who helm the ensembles, are cult heroes of the Pooram. Musicians take pride in performing in pooram. Thrissur’s love for elephants is fabled. Elephant lovers will get to see the most majestic elephants in the State at the
Pooram. Around 100 caparisoned elephants roamed around the city in the Pooram days. Devaswoms compete with each other to parade the most famous elephants.

The most colourful event of the Pooram was the Kudamattam, display of ornamental umbrellas. The parade of the richly caparisoned elephants with ornamental fans and colourful parasols was a visual treat.

A record crowd witnessed the Kudamattam ceremony held at the Thekke Gopura Nada. As the administration arranged additional security for women, a large number of women reached for the celebrations this year. Those who missed the day’s festivities need not be worried. All that rolls from dawn to dusk goes for a repeat at night.

The fireworks display that will unfurl in the wee hours on Wednesday is the piece de resistance of the Pooram.