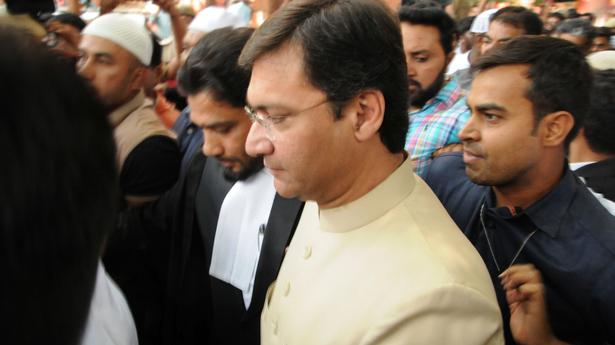 All India Majlis-e-Ittehadul Muslimeen (AIMIM) leader and MLA Akbaruddin Owaisi stirred up a hornet’s nest yet again with his reverential visit to Mughal Emperor Aurangzeb’s tomb in Maharashtra’s Aurangabad district, evoking widespread condemnations across Maharashtra’s political spectrum as the ruling Shiv Sena, the Nationalist Congress Party and the opposition Bharatiya Janata Party (BJP) among others slammed the AIMIM leader’s ‘provocative act’ in the “land of Chhatrapati Shivaji Maharaj.”

A five-term MLA from Chandrayangutta in Telangana, Mr. Owaisi, who has frequently courted controversy with his fiery speeches in the past, had prayed before the Mughal Emperor’s tomb in Khuldabad and laid flowers on it ahead of a function in Aurangabad on Thursday.

Following this, the ruling tripartite ‘Maha Vikas Aghadi’ coalition, particularly the Shiv Sena came down heavily on Mr. Owaisi for deliberately attempting to disturb Maharashtra’s peace with his actions, while the opposition Bharatiya Janata Party (BJP) demanded the ruling government to show some spine and charge the AIMIM leader with sedition.

“It is only to rile everyone in Maharashtra that he [Akbaruddin Owaisi] deliberately bowed before Aurangzeb’s tomb. But let me remind him, that this Mughal Emperor, who plotted against Maharashtra for such a long time, was put into his grave by the Marathas. Today you are coming here and reciting namaaz before this tomb, sometime later, you [Mr. Owaisi] will have to go into go into a similar grave as well,” said Mr. Raut.

The Sena leader warned that Maharashtra would put the AIMIM leader into his grave in the same way in which Aurangzeb was put into his by the Marathas.

Former BJP MP Sambhajiraje Chhatrapati – a direct descendant of Chhatrapati Shivaji and a royal from Kolhapur district in western Maharashtra – condemned Mr. Owaisi’s action by remarking that it was “highly improper”.

“While I’m not aware of the precise details, if this has happened, then this is neither proper nor appropriate. This is the land of Chhatrapati Shivaji,” he said.

The last ‘Great Moghul’, Aurangzeb had twice been viceroy of the Deccan before returning back in 1682 CE to crush the nascent Maratha kingdom founded by Shivaji. While the Mughal army succeeding in storming the Maratha capital Raigad and Aurangzeb cruelly murdered Shivaji’s son, Chhatrapati Sambhaji in 1689 CE, the Marathas ultimately prevailed in a 25-year-long guerrilla war with the Mughals.

Worn out by the strain of his relentless campaign against the Marathas, Aurangzeb, who never returned to Delhi, died a broken man in 1707 – consumed by the “Deccani ulcer” as memorably put by his most famous historian Sir Jadunath Sarkar.

NCP MP Amol Kolhe, who has essayed the roles of both Chhatrapati Shivaji Maharaj and his son Sambhaji in a Marathi television series, censured Mr. Owaisi by questioning as to what kind of an example the AIMIM leader was setting by glorifying and revering Aurangzeb.

“All religions came together under Shivaji Maharaj to defend the land against the invading Mughals. Shivaji Maharaj’s own bodyguard and gunner were Muslims. On the other hand, Aurangzeb cruelly confined his father [Emperor Shah Jahan] until the latter’s death and murdered his brothers [Dara Shukoh, Shah Shuja and Murad Bux]. So, what example are you [Owaisi] setting by bowing before his tomb?” said Mr. Kolhe.

Meanwhile, BJP MLA Ram Kadam demanded that if the State government had the guts, they ought to slap a sedition charge on Mr. Owaisi.

“Aurangzeb destroyed several temples and troubled the Hindu populace. And Owaisi bows before him in the land of Chhatrapati Shivaji Maharaj – his greatest nemesis. Will the Uddhav Thackeray government allow him to escape scot-free?” said Mr. Kadam.

BJP MLA Nitesh Rane launched a broadside against the AIMIM while accusing the Mr. Thackeray’s government of being “pacific” and failing to respond to hardline Muslim outfits like the Raza Academy in the past.

Adding fuel to the fire, independent MLA from Badnera Ravi Rana, who was recently arrested along with his wife, MP Navneet Rana, and slapped with a sedition charge for threating to play the Hanuman Chalisa in front of Uddhav Thackeray’s private residence, criticised the Thackeray government for not lodging a sedition charge against Mr. Owaisi.

Maharashtra Navnirman Sena (MNS) leader Gajanan Kale warned that if the MVA government did not take any action within 24 hours, then the MNS would take the matter into its own hands.

The BJP and the MNS’ responses come against the backdrop of the ongoing sabre-rattling over Maharashtra’s ‘Hindutva’ space between the Sena, its erstwhile estranged saffron ally the BJP and the Raj Thackeray-led MNS.

The BJP (and the MNS) has never tired of accusing the Sena of forsaking its ‘Hindutva’ ideals since the latter’s alliance with the ideologically opposed NCP and the Congress in order to be in power in the State.

“Given that the AIMIM has sprung from the Razakars [paramilitary force deployed by the Nizam of Hyderabad to resist integration with India after 1947], it is not surprising that Owaisi visited and paid his respects before Aurangzeb’s tomb as the mentality of the earlier Islamic dynasties is the same as that of the AIMIM. However, those Muslims, who think about the welfare of the nation, should stay away from AIMIM and the divisive politics of the Owaisi brothers. It is necessary to be vigilant about their moves,” Mr. Danve said.

Khuldabad holds the tombs of a number of saints and great men. Whoever goes to Khuldabad, visits Aurangzeb’s dargah. You cannot tell So, there is no reason to read anything. According to religion,

Mr. Owaisi had come to lay the foundation stone of the Naqeeb-e-Millat Educational Campus, which is a branch of the ‘Owaisi School of Excellence’. Mr. Owaisi runs as many as 11 such schools as part of his charitable and educational work in Hyderabad. The proposed facility in Aurangabad is to be a free school for underprivileged children.

In his speech on Thursday, Mr. Owaisi said that the school would be open not only to Muslim community children, but to children of all faiths and even agnostics.

Remarking there was no need to read anything ‘political’ into Mr. Owaisi’s visit to Aurangzeb’s tomb, Aurangabad MP Imtiaz Jaleel said: “There are many dargahs of spiritual leaders and tombs of great men at Khuldabad… anyone coming here invariably visits Aurangzeb’s resting place as well. It is part of our religion to read the namaaz while visiting any holy place. There is no need to interpret this visit differently,” said Mr. Jaleel.