CPI(M) foresees a decisive role for the communists in 2024 elections in A.P. 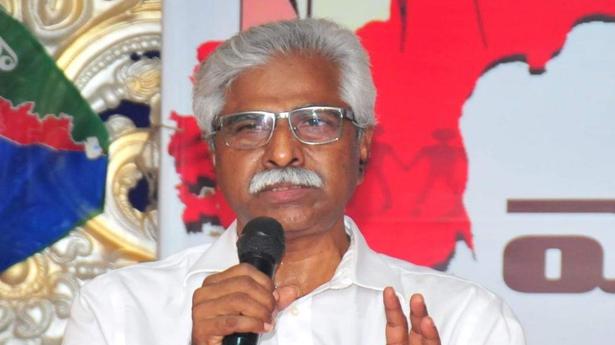 Party keen on contesting the elections on its own strength, says its State secretary Srinivasa Rao

Party keen on contesting the elections on its own strength, says its State secretary Srinivasa Rao

The communist parties will play a decisive role in Andhra Pradesh as all sections of society are fed up with the ruling parties both at the Centre and in the State, says CPI(M) State secretary V. Srinivasa Rao.

The Left parties could win 34 Assembly seats in the unified Andhra Pradesh in 1994, but their strength had gradually dwindled later because of the domination of money power in politics, Mr. Srinivasa Rao told The Hindu on Saturday.

“The regional political parties have gained immensely whenever we entered into an electoral understanding with them. We had a bitter experience with the Telugu Desam Party-led ‘Maha Kutami’ in 2009 and the Jana Sena Party (JSP) in 2019,” Mr. Srinivasa Rao said.

“That is the reason why we are keen on contesting the 2024 elections on our own strength. If needed, we may sail with the like-minded parties that respect the ideology of the communists,” the CPI(M) leader said, and added that these issues would be discussed with the central leadership.

Mr. Srinivasa Rao further said that the party’s cadre base in all the 26 districts remained intact, and it would help the party win the support of the people.

“We are planning to launch a door-to-door campaign in July and August. Thereafter, we will chalk out a plan of action to highlight the failures of the Union and State governments,” he said.

Earlier, Mr. Srinivasa Rao laid the foundation stone for the construction of Krishnamurthy Bhavan, the party office at Tekkali in Srikakulam district.

Later, in a meeting with party State Secretariat member Ch. Narasinga Rao and district secretary D. Govinda Rao, he discussed the agitations to be staged against the proposed construction of the Bhavanapadu port in Santabommali mandal.