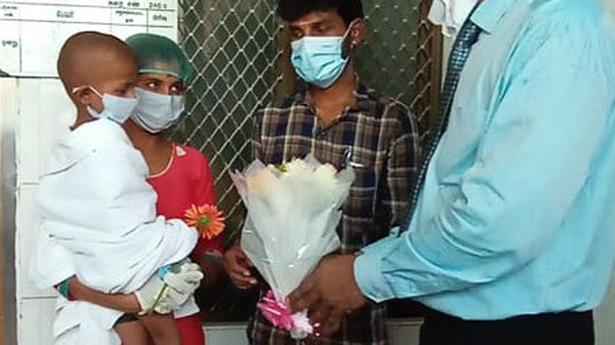 According to doctors, this was the first paediatric case of bone marrow transplantation in a government hospital in the State.

Aruna Rajendran, Paediatric Hemato Oncologist, Institute of Child Health (ICH) and Hospital for Children, Madras Medical College, said the boy was treated with chemotherapy followed by surgery at the Paediatric Surgery department of ICH. With the disease in control, autologous bone marrow transplantation was planned.

“The patient is given a high dose of chemotherapy which can wipe out normal marrow cells. Infusing his own stem cells will help in cure,” she said.

The boy underwent bone marrow transplantation at RGGGH. The procedure was done in coordination with the Haematology Department and Transfusion Medicine department. The child was discharged after 25 days of hospitalisation, she said.

Dr. Aruna Rajendran said that bone marrow transplantation was a curative treatment for many blood disorders, including thalassemia, aplastic anaemia, leukemia, neuroblastoma and myeloma. A team effort was required to take care of the patient in a germ-free environment where he/she would undergo conditioning chemotherapy followed by stem cell infusion. In the next 10 to 14 days, the patient would be severely immunosuppressed with extremely low blood counts making him or her suspectible to severe infections and bleeding. With adequate supportive care, most patients undergo transplantation successfully resulting in the cure of such life-threatening diseases.

The Department of Paediatric Haematology Oncology was established at the ICH in 1987. Every year, around 2,000 new children with various blood disorders and 350 new children with cancers are treated at the hospital. At any given point of time, 500 children are on active treatment for cancer. Around 120 children with thalassemia and 60 children with haemophilia receive regular transfusions and clotting factor concentrate prophylaxis regularly from ICH. Children with cancer were supported with chemoports or peripherally inserted central catheter lines to receive painless therapy.