IMD warns of heavy to very heavy rainfall throughout the week 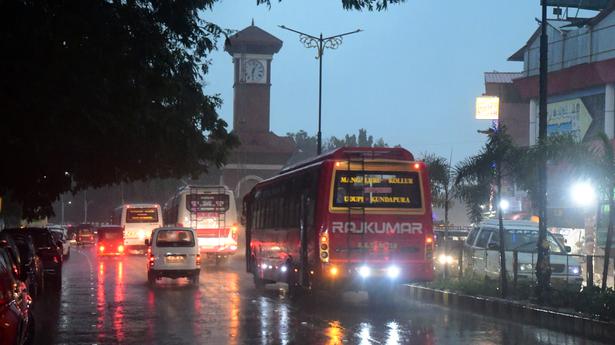 Even before the monsoon sets in, many parts of the State are predicted to receive heavy to very heavy rainfall throughout the week. The India Meteorological Department (IMD) has sounded orange and red alerts (heavy to very heavy rainfall) in all districts of coastal Karnataka on Wednesday and Thursday. The rains will mainly occur as a result of moisture-laden strong westerly winds in the Arabian Sea and a few other systems, according to the weatherman.

“The strong westerlies are blowing towards the coasts of Kerala and Karnataka at 1.5 km above sea level. There is also an upper air cyclonic circulation at 3.6-5.8 km above sea level in Lakshadweep, which is prevailing over Tamil Nadu and its neighbourhood. There is a north-south trough extending 900 metres above mean sea level from Madhya Pradesh to Tamil Nadu across interior Karnataka. All of this will result in heavy rainfall in the State for the next few days,” said a scientist at IMD Bengaluru.

In all, districts of south-interior Karnataka, yellow alert has been issued on Tuesday and orange alert has been issued on Wednesday and Thursday by the IMD. Ahead of the alerts in coastal Karnataka, district administrations of Dakshina Kannada and Udupi have advised people to stay cautious and not enter waterbodies. They have also advised the fishermen to not enter the sea for three days.

Even though the intensity might subside for a while before monsoon sets in, the rainfall across the State is expected to continue through next week too. “It can be said that summer is mostly over in the State. These rain spells will be followed by the monsoon, which will set across the State between June 7 and 10,” a scientist explained.