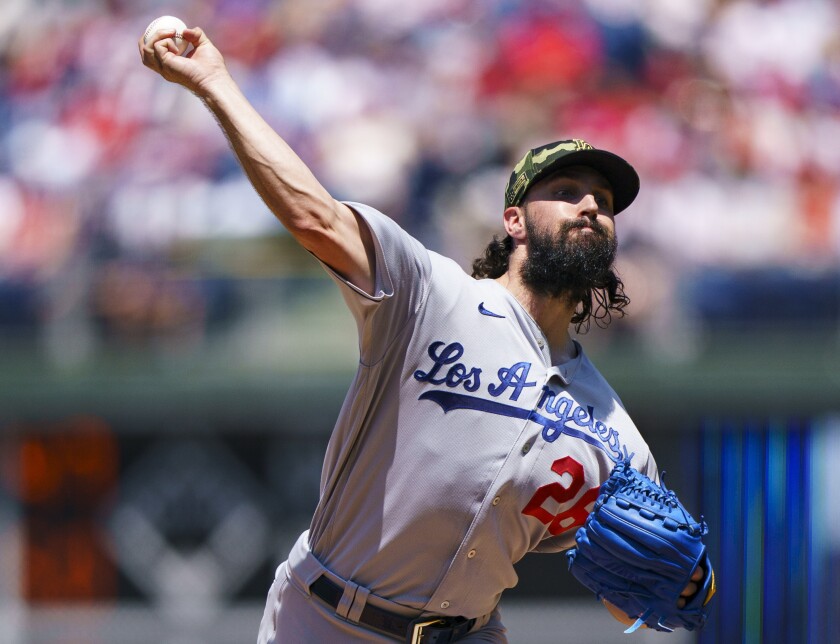 The play seemed to unfold almost in slow motion.

A bouncing grounder. A high hop. A booted ball by second baseman Max Muncy, rolling helplessly away from him on a bright, sunny — and suddenly dreadful — Philadelphia day.

A game the Dodgers should have won on Sunday against the Phillies instead came unraveled all at once, with Muncy’s fielding error leading to two runs and a walk-off 4-3 win for the Phillies at Citizens Bank Park.

Clinging to a one-run lead with Phillies runners on second and third in the bottom of the 10th inning, the Dodgers were one out away from a win when Alec Bohm sent the softly-hit chopper Muncy’s way.

Muncy took a few steps in, set his feet and appeared to be well-positioned for a seemingly routine play.

But the final bounce kicked higher than he expected. He lifted his glove, but couldn’t stop the ball from trickling through his legs.

“That’s something that you know as an infielder, as the day goes on, the field is getting harder and the ball is gonna bounce more and take funny hops,” Muncy said. “I just didn’t give myself enough space.”

As the ball rolled slowly behind him, Phillies baserunner Garrett Stubbs scored easily from third to tie the game.

The real problem for the Dodgers was Roman Quinn, the speedy Phillies outfielder who got a good jump at second base at the start of the play.

As Muncy frantically tried to retrieve the ball, a sprinting Quinn came flying around third base. Muncy made a good throw home from the middle of the infield. But Quinn’s headfirst slide was just in time. The tag from catcher Austin Barnes — as was confirmed by a video review moments later — was a split second too late.

The play capped what had already been a wild game in the weekend series finale.

The Dodgers (27-13) had jumped out to an early lead 2-0 on solo home runs from Mookie Betts and Edwin Ríos. They also got an impressive six-inning, seven-strikeout start from right-hander Tony Gonsolin, who didn’t yield a run until Stubbs hit a solo home run in the sixth.

It was Gonsolin’s second straight six-inning start, a first in his MLB career, and lowered his team-best ERA to 1.62.

“Tony was really good, his entire pitch mix was good,” manager Dave Roberts said. “We needed some length today, and he gave it to us.”

The Dodgers needed length because their relievers were spent, following a win on Saturday in which eight different pitchers were needed in a bullpen game.

The short-handed bullpen came close to putting Sunday’s game away. Left-hander Alex Vesia navigated the heart of the Phillies order in the seventh. Fellow southpaw Justin Bruihl created a jam in the eighth, but right-hander Yency Almonte escaped it by inducing the team’s third double-play of the day.

Almonte returned to the mound in the ninth and got two quick outs. But then the Phillies (19-22) rallied to extend the game.

Segura didn’t wait long to tie the score, lining a first-pitch sinker to left to make it 2-2.

“It’s a situation where putting Schwarber on, I’d just rather have him throw to Segura,” Roberts said. “He beat us. That’s baseball.”

Nonetheless, the Dodgers took the lead in the top of the 10th on a Trea Turner RBI single. And though they squandered an insurance opportunity by leaving the bases loaded, Justin Turner made a key play in the bottom half of the inning, faking up baserunner JT Realmuto at third base by pretending a throw went to the screen.

Realmuto took a step off the base. Justin Turner, who had the ball in his glove all along, applied the tag for a crucial first out.

“That was a big out,” Roberts said. “I thought that was going to be the difference in the game.”

Instead, it was his own team’s mistake that decided the contest, with Muncy crouching down and grasping his bowed head as the Phillies celebrated their walk-off E4 — ending the Dodgers season-best seven-game winning streak.

“It’s one of those things where, I go out there every day and I try to at least throw something in the bucket, try to do whatever I can to help the team win,” said Muncy, who continued his early-season hitting woes Sunday by going 0 for 4 at the plate. “Unfortunately today, I took something out of it. I didn’t add to helping the team. That’s my own fault and I gotta own up to that.”