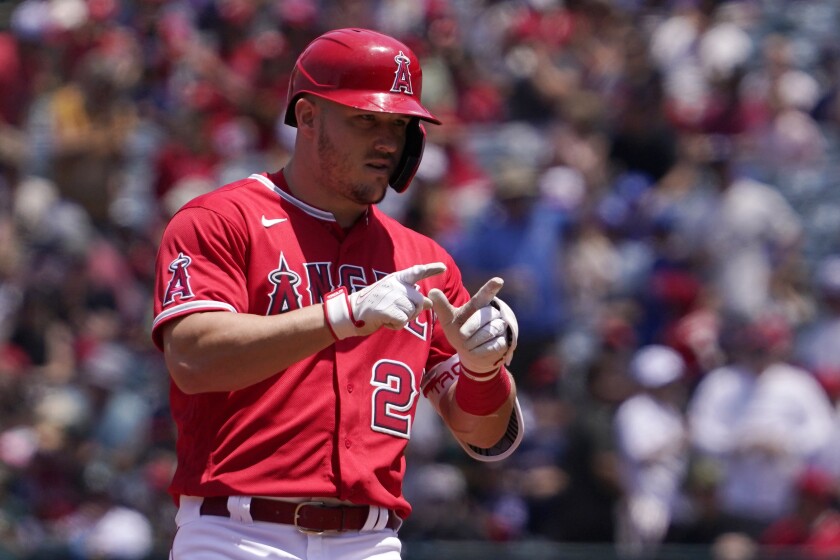 Patrick Sandoval wasn’t quite as dominant Sunday as he was last July 24 in Minnesota, when the Angels left-hander came within two outs of a no-hitter and struck out a career-high 13.

He was in command throughout a superb 7 1/3-inning start, giving up one run and four hits, striking out seven and walking one in a 4-1 victory over the Oakland Athletics before 40,042 at Angel Stadium.

Mike Trout reached base in four of five plate appearances with a double, an RBI single, a walk and a home run, and Shohei Ohtani hit a home run and a single to pace the Angels’ offense.

Sandoval needed only 82 pitches to complete seven scoreless innings in which he gave up two singles and did not allow a runner to reach second base, and he seemed poised to throw his first complete game or shutout.

Then in the eighth inning, Tyler Wade, a middle infielder who started in right field in place of the injured Taylor Ward, lost Kevin Smith’s fly ball to medium right in the sun, the ball dropping for a leadoff double.

Smith took third on Elvis Andrus’ grounder to first and scored on Cristian Pache’s soft single to center to cut the Angels’ lead to 4-1. Luis Barrera walked to put two on and bring the tying run to the plate.

Angels manager Joe Maddon pulled Sandoval in favor of right-hander Ryan Tepera, who struck out Sheldon Neuse with a 92-mph sinker and pinch-hitter Seth Brown with a 93-mph sinker to preserve the three-run lead. Closer Raisel Iglesias struck out the side in the ninth for his 11th save.

Sandoval retired 10 consecutive batters to open the game, two by strikeout, before Chad Pinder reached on second baseman Luis Rengifo’s fielding error with one out in the fourth. The pitcher responded by striking out Jed Lowrie with an 83-mph changeup and Sean Murphy with an 86-mph slider.

Sandoval whiffed Christian Bethancourt with an 83-mph changeup to open the fifth, but Smith broke up the no-hit bid when he lined an 85-mph changeup that was just off the outside corner to center for a single. Rengifo then fielded Andrus’ sharp grounder to start an inning-ending double play.

Sandoval retired the side in order in the sixth and the first two batters in the seventh before Murphy lined a single to right.

Ohtani opened the bottom of the first by crushing a hanging curveball from A’s left-hander Cole Irvin 443 feet to center field for his ninth homer of the season. Trout followed with a double to left, but the Angels were unable to bring him home.

Kurt Suzuki, activated from the COVID-related injured list Saturday, led off the second with a single to center. Irvin mishandled Wade’s bunt for an error, and Andrew Velazquez, after fouling off a bunt, singled sharply to center to load the bases with no outs.

Ohtani flied to medium right. Suzuki, a slow-footed catcher, tagged from third but stopped a few feet beyond the bag. Wade, thinking Suzuki was headed home, tagged from second.

Pinder, the A’s right fielder, threw to second. Suzuki should have broken for home at that point, but he didn’t. Wade couldn’t get back to the bag in time and was tagged out at second.

Trout followed with a 55.7-mph dribbler to the second-base spot that went for an RBI infield single and a 2-0 Angels lead because the A’s were shifted toward the left side.

Suzuki was thwarted again in the third when, with a runner on first and two outs, Pache raced to the warning track and made a leaping catch of Suzuki’s drive at the top of the center-field wall.

Trout walked to open the fifth, took second on Matt Duffy’s one-out single and scored on Brandon Marsh’s soft single to center for a 3-0 lead.

Trout pushed the lead to 4-0 in the seventh when he led off with his 12th homer of the season, turning on Justin Grimm’s inside curve and sending it 383 feet over the wall in left.

The Angels played their second consecutive game without Ward, who left Friday night’s game because of a neck injury after slamming face-first into the right-field wall while catching Tony Kemp’s ninth-inning drive.

The leadoff man, who has a major league-leading .370 batting average and 1.194 on-base-plus-slugging percentage to go with nine homers, 23 RBIs and 23 walks, was diagnosed with a neck stinger and is listed as day to day.