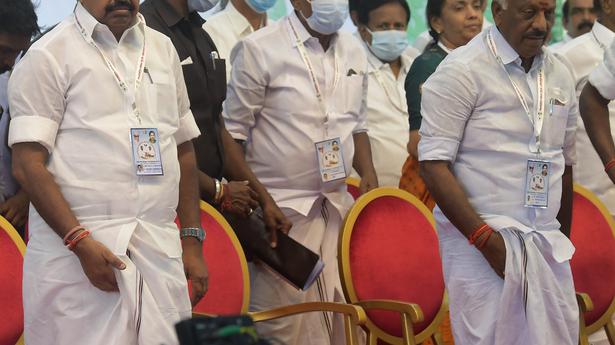 “As of today, Mr. O. Panneerselvam is the party’s treasurer and Mr. Edappadi Palaniswami is party’s headquarters secretary.”

“As of today, Mr. O. Panneerselvam is the party’s treasurer and Mr. Edappadi Palaniswami is party’s headquarters secretary.”

A day after a chaotic AIADMK general council meeting in which party workers booed its leader O. Panneerselvam, steering committee member and former Law Minister C.Ve. Shanmugam on Friday claimed the tenure of the party’s coordinator and co-coordinator Edappadi K Palaniswami ended on Thursday, as the amendment in the bylaws that facilitated their election to those positions were not validated by the General Council.

“As of today, Mr. O. Panneerselvam is the party’s treasurer and Mr. Edappadi Palaniswami is party’s headquarters secretary,” claimed Mr. Shanmugam during his interaction with journalists outside the residence of Mr. Palaniswami in Chennai.

The election of Mr. A. Tamilmagan Hussain as party’s presidium chairman was valid, as he was elected by the general council, Mr. Shanmugam maintained and further added that the election of positions in the AIADMK was “to be merely intimated” to the Election Commission and the latter’s approval was not needed.

As per the bylaw one-fifth of the members of the general council could seek a meeting and upon such demand the meeting has to be convened within 30 days. Therefore, Mr Shanmugam contended, the General council meeting convened for July 11 by the presidium chairman (as sought by 2,190 members) was valid.

All students of Management Studies Department in IIT Madras get placed