The new delimitation exercise is supposed to fix the disparity in ward sizes and population in the city. But the ground reality maybe markedly different

The new delimitation exercise is supposed to fix the disparity in ward sizes and population in the city. But the ground reality maybe markedly different

On Thursday, the State government notified the draft of the newly delimited 243 wards of the Bruhat Bengaluru Mahanagara Palike (BBMP). The number of wards has increased from 198 to 243, with the civic body carving out 45 new wards in the existing area itself. The government has provided 15 days time to submit any objections to the draft.

The previous BBMP council’s term ended in September 10, 2020 and for almost two years, the city administration was run by bureaucrats. Critics argue that the elections were postponed deliberately by the ruling BJP to fortify the positions of its MLAs, who have been calling the shots in Bengaluru in the absence of a civic body.

With the delay in conducting polls, two former councillors Abdul Wajid and M. Shivaraju had filed a petition before the High Court of Karnataka seeking early polls to the BBMP. The State Election Commission had then gone to court citing incapability to hold polls due to delay in completing the delimitation and fixing reservation.

Meanwhile, the State Government brought in the BBMP Act, 2020, and increased the number of wards from 198 to 243. The High Court, however, ruled that the polls should be held for 198 wards. The Government then appealed against the High Court order in the Supreme Court, which then stayed the matter.

On May 10, the Supreme Court directed State Election Commissions across the country to conduct polls to the local bodies every five years. But in the BBMP’s case, owing to the stay on civic body polls issued by the apex court itself, the SEC had approach the SC and file an application seeking that the stay on the implementation of the Karnataka HC order be vacated so that BBMP polls could be held.

On May 20, the Supreme Court directed the State government to expedite the BBMP polls. Observing that the elections are crucial and are seen by many as a precursor to the Karnataka Assembly polls (due in 2023), it accepted the State government’s submission seeking eight weeks time to finalise delimitation of wards and fix OBC reservation.

The court also ordered that the SEC could begin its preparatory exercise within one week of the notification of delimitation of wards or determination of OBC reservation, whichever of the two comes later.

On June 9, the BBMP submitted the draft of the ward delimitation report to the Urban Development Department (UDD). The draft report increased the number of wards in the BBMP area to 243 from 198, creating 45 new wards in the same area, mostly in the outer zones. Meanwhile, the State Government brought in the BBMP Act, 2020 – which came into effect from January 11, 2021 – under which the delimitation exercise was carried out.

The government has now notified the draft in the fifth week. Meanwhile, the Justice Bhaktavatsalam Committee which had been tasked with three-step verification of political representation of OBCs in the city, is yet to fix the reservation and submit their report.

The new ward delimitation exercise is supposed to fix the disparity in ward sizes and population in the city. Presently, the ward sizes vary from an average population per ward of 28,541 in Shivajinagar to 1,00,347 in Yeshwanthpur assembly constituencies. Outer zone wards have a larger area and population than core city wards.

In keeping with this, Assembly constituencies in the outer zones such as Mahadevapura (from eight wards to 13), Bommanahalli (eight to 14), R.R. Nagar (nine to 14), and Bengaluru South (seven to 12) have added the most number of new wards. Interestingly, many of the core area constituencies have also added wards — Basavanagudi (from six to seven wards), C.V. Raman Nagar (from seven to nine wards). 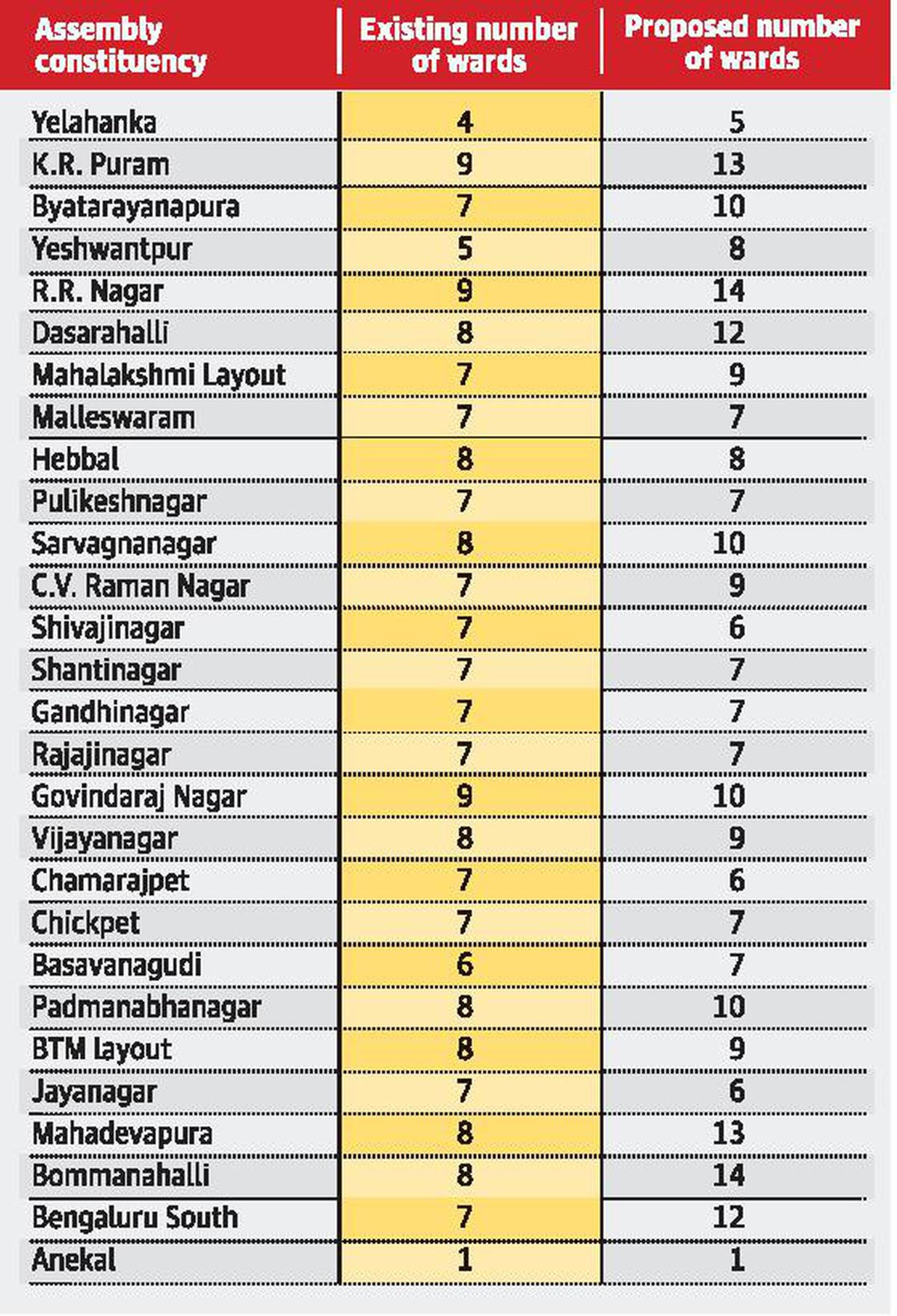 “We have carried out delimitation increasing the number of wards to 243, with a uniform average population of 34,700 with a maximum variation of 10%. There are 45 new wards created in the same area,” said Chief Civic Commissioner Tushar Giri Nath.

Bengaluru Navanirmana Party, a new party with exclusive focus on Bengaluru, had come out with a proposal to use the latest electoral list as the basis for ward delimitation to ensure the ground reality is reflected in the new wards.

Given how the growth of population is at a higher rate in the outer zones while some areas in the core city may have seen a drop in its population, experts had also said that opting for a uniform ward size would itself make the wards uneven in a short time.

However, Chief Civic commissioner Mr. Giri Nath said that the civic body’s hands were tied, as per rules, delimitation of all electoral constituencies has to be carried out based on the most recent census data available. “Ideally we should have got the National Census, 2021. However, due to the pandemic, census exercise has been delayed and we have had to rely on the 2011 census,” he said.

Political rebellion and financial gain were both touted as the reasons why the government was dragging its feet on the civic polls.

A senior BJP office-bearer in the city had said none of the city MLAs, cutting across party lines, were interested in holding the civic polls now. With each ward having multiple ticket aspirants from both Congress and BJP for the BBMP elections, holding civic polls could create unrest and may lead to political polarisation ahead of the Assembly polls.

Bengaluru contributes 12.5% of the seats in the Karnataka Legislative Assembly and over 60% of the State’s revenue annually. It was speculated that the MLAs were keen on controlling the city and its vast resources, and were not ready to give up the power to corporators. But the Supreme Court dashed their hopes.

Political opposition Congress had come down heavily on the delimitation of wards. Senior Congress leader Ramalinga Reddy had criticised the draft as prepared by the “RSS in Keshava Krupa” solely with the interest of the BJP in mind instead of the convenience of the people.

He had said the party would study the draft and submit its objections, and if needed, they were open to challenge it legally.

The naming of the newly delimited wards after individuals has also irked citizens. Some of the wards have been named after historical figures. Kanneshwara Rama, Veera Madakari, Chanakya, Chatrapati Shivaji, Ranadheera Kantheerava, Veera Sindhura Lakshmana, Vijayanagara Krishnadevaraya, Sir M. Vishweshwaraiah, Deendayalu — are some of the ward names in the new list.

Farmers worried about losing land for stocking sand, which went ‘missing’ after being ‘seized’