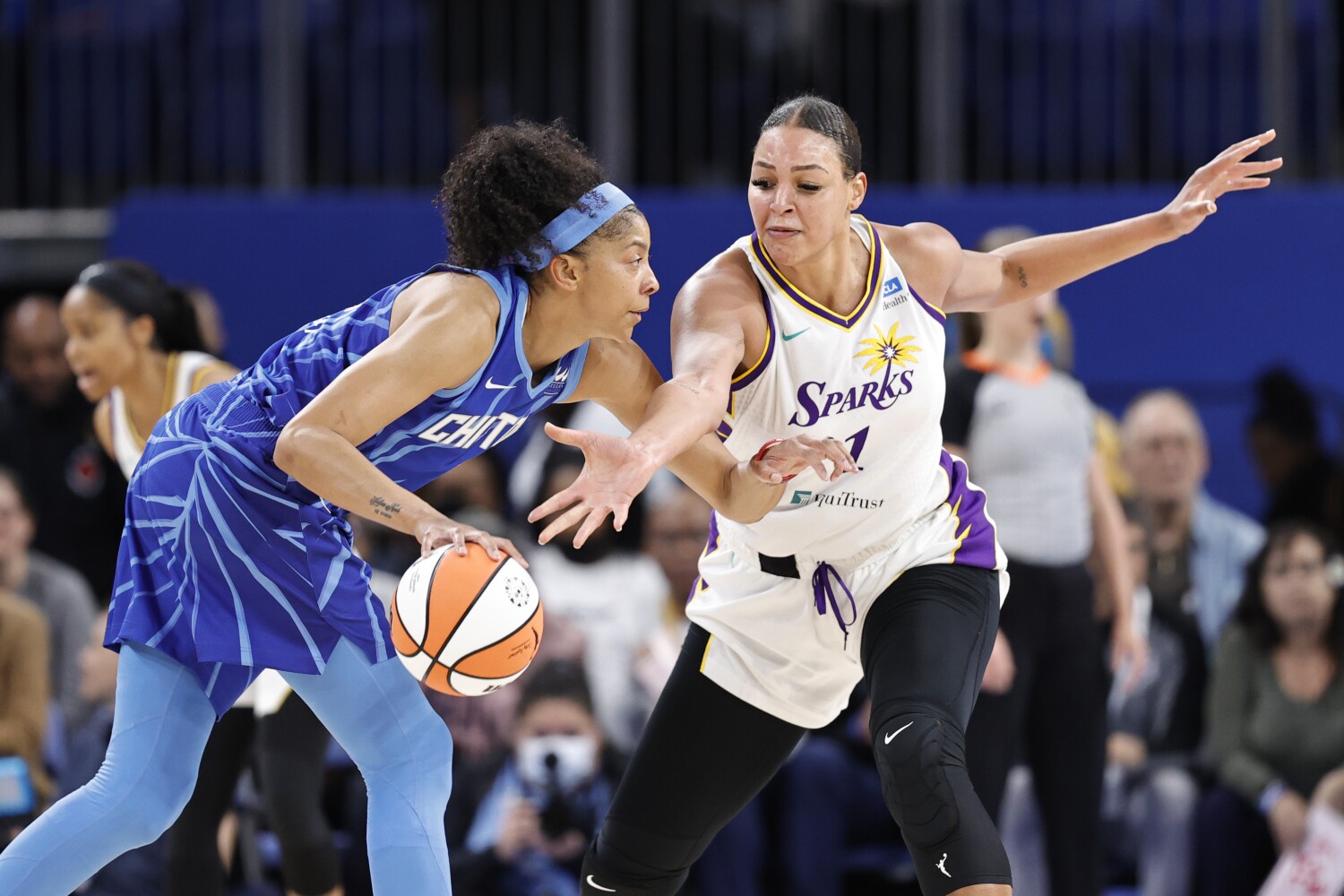 Candace Parker took the second left instead of the first, sat in an unfamiliar locker room and warmed up on the opposite side of the court. After 13 years as a Spark, returning to L.A. for the first time as an opposing player felt backwards, but her performance felt painfully familiar to those who watched her leave.

Parker dazzled in her first game in L.A. since bolting for the Chicago Sky last year with 10 points, 10 assists and 14 rebounds in an 82-59 blowout win Thursday at an arena she knew as Staples Center.

“It will always be Staples to me,” Parker said. “It will not be Crypto.com.”

The arena’s new name was only part of Parker’s return to slightly unfamiliar surroundings. Teammates asked her where she usually sat, but she responded that she’d never been on that side of the arena. After the game, Parker followed teammate Kahleah Copper to the postgame news conference as if Copper was the one who spent 13 years here. They wandered the halls for a few minutes before being ushered into a small room where the visiting team did its interviews.

Yet Parker had no problems finding her way around the court. She sliced up her struggling former team with a near double-double in the first half (12 rebounds, nine assists) and showed the Sparks (6-10) what they were missing when they let her walk away as a free agent in 2021. Her daughter Lailaa sat courtside as the Sky (12-5) ended a five-game losing streak to the Sparks in a sweet homecoming for Parker.

“This is home. This is where my family lives. This is where I love coming back to,” the two-time most valuable player said. “It’s definitely bittersweet to be back because it is a part of our past. Lailaa gets mad every time she turns on the game and sees someone sitting in her two courtside seats.”

Lailaa, 13, and Parker’s newborn son Airr joined her on the court immediately after the game to take photos. Fans lined the tunnel as Parker walked back to the locker room, calling her name for photos and autographs. She posed for a photo with a baby.

Parker shared a tight embrace with former teammate Nneka Ogwumike at midcourt before tipoff and also hugged guard Kristi Toliver. The three were key to the Sparks’ last championship in 2016.

While the Sparks did not play a video montage during the game to honor Parker’s return, the Sparks’ public announcer shouted, “Welcome home Candace Parker,” during the starting lineup introductions. The moment received one of the loudest cheers of the night.

“I spent 13 years here, 13 amazing years and I wouldn’t change that for anything,” Parker said. “I have love for the franchise, for the city and what we were able to do in this building.”

Parker’s departure was one of the biggest hints at the franchise’s dysfunction, which included former general manager Penny Toler being fired in 2019 for using a racial slur in the locker room after a game. It took the team more than a year to officially name then-head coach Derek Fisher as its new general manager. But the coach who benched Parker in the 2019 playoffs lost both Parker and point guard Chelsea Gray in free agency during his first season managing the roster.

Fisher was fired as head coach and general manager this month. The Sparks are 1-3 under interim head coach Fred Williams.

The opposite trajectories of the two franchises were on full display Thursday when the Sky coasted with five different double-digit scorers while the Sparks struggled to manage two.

Despite becoming the first WNBA player in history with three triple-doubles, Parker was quick to deflect praise to her teammates. Anyone could drop 20 points a game, she said, but they are committed to sharing the ball. She’s appreciative of playing on a team with so many weapons. The 6-foot-4 forward showed her playmaking ability by dominating point guard duties, which Sparks guard Brittney Sykes said was likely a scouting adjustment from the Sky because the Sparks are known to pressure guards relentlessly.

“Candace is a great player,” Sykes said matter-of-factly, eliciting laughs from reporters. “Let’s just be real here. … Candace is going to do what Candace does. Us as a team, we just have to make sure we’re locking in defensively.”

The 36-year-old Parker reenergized her career in 2020, when she was named defensive player of the year. Other celebrated veterans Sue Bird, 41, and Sylvia Fowles, 36, have already announced they will retire at the end of the season. Parker knows she is approaching the end of her career, but with the way she’s playing, it doesn’t feel imminent. For now, Chicago’s James Wade will simply enjoy getting to coach one of the game’s greats.

“You feel pretty good waking up and you know you have players like her in your corner,” he said, “and not preparing against her.”

The Sparks once knew that luxury.