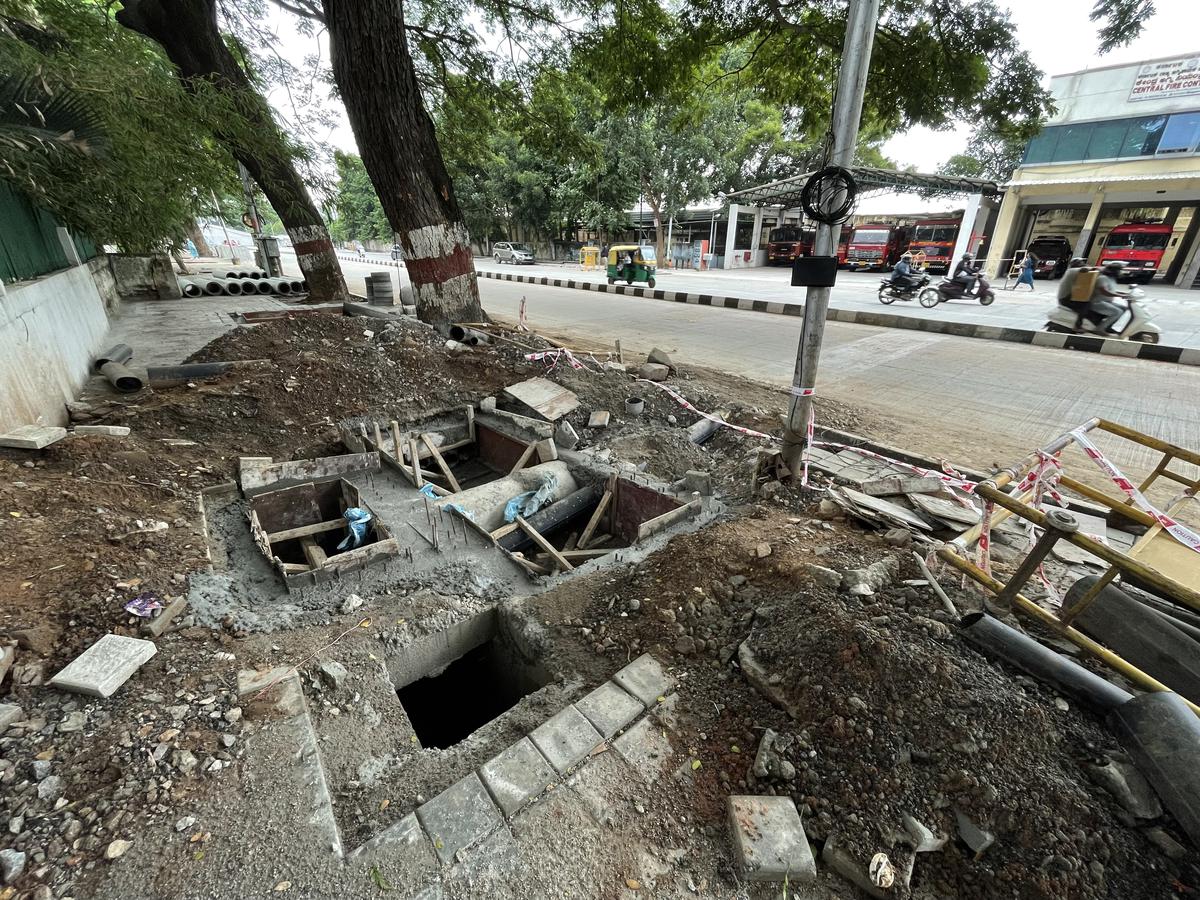 Absence of footpaths or uneven sidewalks, parked vehicles, encroachments by shopkeepers and hawkers, construction debris — these are among the problems that confront pedestrians in the city

Absence of footpaths or uneven sidewalks, parked vehicles, encroachments by shopkeepers and hawkers, construction debris — these are among the problems that confront pedestrians in the city

Walking on the footpaths in Bengaluru is a delicate balancing act that often throws one’s life and limb at risk.

Lack of footpaths or uneven sidewalks, open drains, piled up construction debris, vehicles parked or even zooming on pavements, telecom cables strewn around, and encroachments by shops and hawkers… There seems to be no end to obstacles on the footpaths.

This often pushes pedestrians to the roads, risking their lives, which is evident in the high number of pedestrian deaths in road accidents every year — 98 killed and 335 injured this year till May 31. The ongoing Namma Metro and several other civic works across the city have shrunk pedestrian facilities further.

BBMP allocates ₹30 lakh to every ward committee for footpath works (2022-23 budget), and this is what we get.
| Video Credit: Adithi Holla & Samhitha Saikiran

In August 2019, the High Court declared that the right to have reasonably good footpaths and roads is a fundamental right of citizens under Article 21.

Indian Road Congress (IRC) norms stipulate a clear walking path 1.8 metres wide and 2.2 metres high without any obstacles. But hardly will we find stretches of footpath adhering to these norms, except on TenderSURE roads in the central business district.

The sorry state of footpaths is a top concern of the people. For instance, a survey on city politics conducted by Janaagraha Centre for Citizenship and Democracy revealed that lack of footpaths and pedestrian facilities dominate the concerns of citizens across the city, cutting across all classes. In March 2021, the Karnataka State Legal Services Authority’s (KSLSA) report submitted to the High Court of Karnataka revealed that citizens had flagged 5,435 issues, of which a mere 437 were regarding potholes and bad roads and an overwhelming 4,998 (92%) were regarding bad footpaths in the city. The KSLSA report also showed the fast-developing outer zones of Mahadevapura and Bommanahalli, apart from the East zone, which has also seen rapid development in recent years, reported the most number of footpath issues.

Work on a footpath under way on Seshadri Road in Bengaluru.
| Photo Credit: SUDHAKARA JAIN

“With most roads dug up for civic works, there seems to be no concept of a road at all in our areas, especially when it rains, leave alone footpaths. We have protested multiple times, planting saplings on the roads,” rued Jagadish Reddy, a resident of Varthur. In the recent survey by Janaagraha, Varthur ward scored 0/100 for walkability. The Bangalore Water Supply and Sewerage Board has been laying drinking water pipes and underground drainage lines in the outer zones and even after they complete their work, the civic body is slow to redo those roads.

But other areas fare no better. For instance, with the ongoing metro construction near the Central Silk Board, there is scarcely a stretch of walkable footpath. Pedestrians walk gingerly on roads as heavy-duty vehicles move past them. Tangavelu, a shopkeeper, recalled the construction having started around five years ago. “Accidents are common,” he said. Ramya S., recalled an accident in the area. “An old man was hit by a passing vehicle just he got down from an auto. This could have been avoided if the pavements in the area had been fixed,” she said.

Bad pavements invariably affect vulnerable groups such as senior citizens, children, and the poor, who predominantly walk to commute more than others. The pavements around Jayanagar’s Madhavan Park are uneven and are occupied by parked vehicles and commercial establishments. They remain inaccessible to senior citizens and children. Despite several complaints, no action has been taken against such encroachments, said Shekar B.S., a volunteer from the Jayanagar Madhavan Park Volunteer Group. 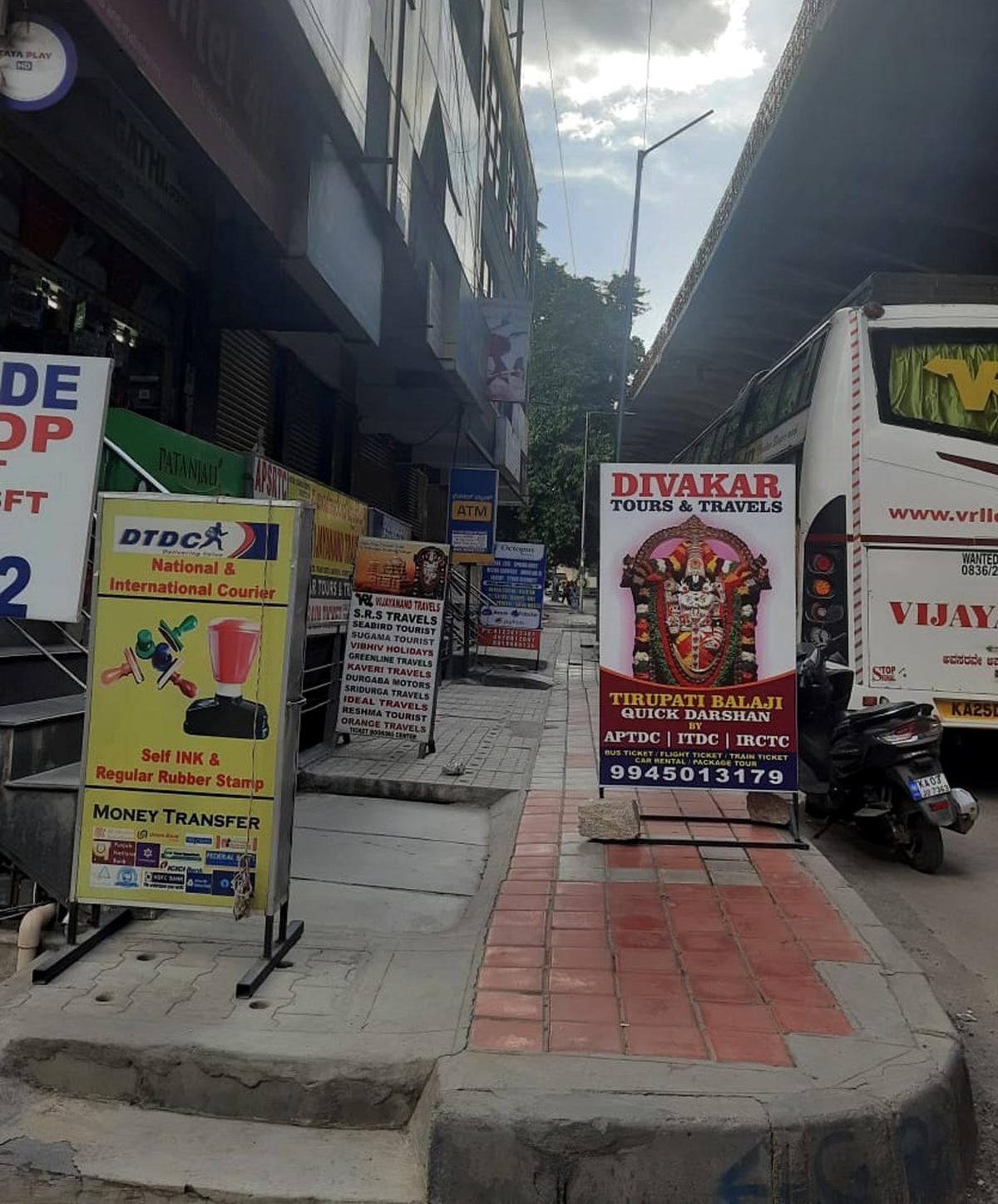 A series of obstructions on a pavement near Central Silk Board junction in Bengaluru.
| Photo Credit: Adithi Holla

The needs of senior citizens, pregnant women or children are not kept in mind while constructing pavements, said Lekha Adavi, an advocate and urban activist. Senior citizens struggle to get on and off Bengaluru’s footpaths. With missing ramps, splintered stones, and inadequate pedestrian signals, footpaths in the city are not friendly for the differently abled either, she pointed out.

Adding to these woes are endless encroachments of footpaths — construction debris, commercial establishments putting out tables, advertisement boards, street vendors, among others. In 2021, the High Court had directed the Bruhat Bengaluru Mahanagara Palike (BBMP) to set into motion criminal action under various laws for encroaching footpaths and clear them. The civic body and Bengaluru City Traffic Police have carried out drives to remove encroachments, illegal cables, parked vehicles, and street vendors, and have often run into controversies. There are also several cases of property owners encroaching upon footpaths. Many building owners build ramps for their vehicles to get in and out of their property, creating obstacles for pedestrians. These essentially cut off the contiguity of walkable footpaths, making it difficult particularly for the elderly and the differently abled.

IRC guidelines provide for 0.5-1 metres of space for property access and stipulate at least 1.8-metre wide walkway for pedestrians beyond that. However, with narrow footpaths across the city, the guidelines are rarely followed.

Street vendors on pedestrian pathways have been a contentious issue, often bringing to fore class divisions and their perceptions. The traffic police are carrying out a footpath encroachment clearance drive across the city, as part of which they have got several street vendors to vacate their vending spots, drawing the ire of vendors and activists alike.

“We street vendors are not occupying the street and are not encroachers. We rightfully claim that space and have all legal rights under the Street Vendors (Protection of Livelihood and Regulation of Street Vending) Act, 2014. The civic body has not implemented the Act in spirit, which if done so, will demarcate vending zones. The civic body is duty-bound to provide infrastructure facilities and integrate these vending zones into the footpaths,” said S. Babu, president, Federation of Street Vendors’ Associations in Bengaluru District.

It is a common misconception that city streets do not have enough space; the real problem is that we have not allocated this space in an equitable manner, said Priyanka Sulkan, an expert on Sustainable Cities and Transport at WRI India. She said street activities like commercial street vending contribute greatly to a city’s daily functioning and suggested that they be accommodated in multiutility zones, specifically dedicated to all these dynamic activities on our streets.

‘This will have a chilling effect on the fight for justice’