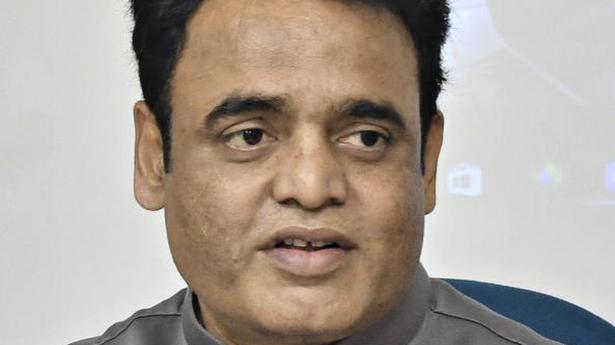 During an interaction with Minister for Higher Education Dr. C.N. Ashwath Narayan, a man claiming to be a BJP worker said the party would lose votes if Dr. B.R. Ambedkar is insulted in textbooks

During an interaction with Minister for Higher Education Dr. C.N. Ashwath Narayan, a man claiming to be a BJP worker said the party would lose votes if Dr. B.R. Ambedkar is insulted in textbooks

In a programme organised by Manthana, a forum, in Hassan on June 23, the Minister said, all these years, the Congress party designed textbooks to suit their political ideology. They glorified the history of invaders, ignoring the rich heritage of the land.

“The committee constituted during our time is correcting the mistakes committed by the previous committee headed by Prof. Baragur Ramachandrappa. If any mistake continues in the final textbooks, Chief Minister Basavaraj Bommai has clarified that it would be corrected,” he said.

Addanda C. Cariappa, Director of Mysuru Rangayana, said many people had been criticising the textbooks without actually reading them. Those who tore the textbooks had not read the books properly. “The books have already reached the students, and they have started studying them. Should the government take back the books now?”

He appealed to people not to remove the ruling party from power, stating that if the party in the opposition came to power, students might have to read lessons on Afzal Guru, who was convicted for the attack on Parliament.

During the interaction, a person introduced himself as a BJP worker. He urged the Karnataka Government not to insult Dr. B.R. Ambedkar by removing the portion of the text that refers to him as the architect of the Indian Constitution. “I am also a BJP worker. In my family alone, there are 40 voters. The party will lose votes if you insult Ambedkar,” he said.

Mr. Ashwath Narayana assured that the mistake would be corrected.