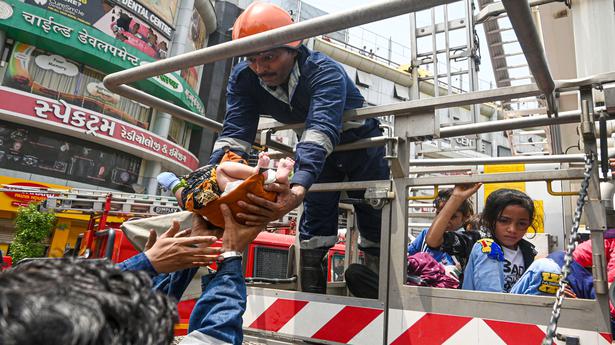 Although there was no fire in the children’s hospital and other care units, thick smoke entered the medical facilities, causing panic

Although there was no fire in the children’s hospital and other care units, thick smoke entered the medical facilities, causing panic

A fire broke out on the third floor of a four-storey commercial complex housing a children’s hospital, and 75 persons, including 13 newborn babies, were rescued from the structure in Gujarat’s Ahmedabad city, an official said.

The blaze was reported at Dev Complex, located near Parimal Garden crossroads in the city, in the afternoon, he said.

As many as 75 people, including 13 newborns and their parents from the children’s hospital, were rescued safely from the ground-plus-four storey structure, the official said.

“We received a call around 1.30 p.m. about a fire breaking out in the server room of an accountancy firm on the third floor of the building opposite the hospital, after which around 20 fire tenders were pressed into service,” Om Jadeja, divisional fire officer at Ahmedabad Fire and Emergency Services (AFES) said.

At least 75 people, including 13 newborn babies, three of them admitted in the NICU, and their parents in the children’s hospital located on the fourth floor of the building were rescued and evacuated to the terrace of the building, he said.

They were rescued using an aerial ladder platform, and all the patients were shifted to the nearby hospital in ambulances, he said.

The children’s hospital has around four medical care facilities located in the building, and an ortho care unit was located right opposite the premises where the fire broke out, the official said.

Although there was no fire in the children’s hospital and other care units, thick smoke entered the medical facilities, causing panic, he said.

According to officials, the rescue operation has concluded and the blaze was brought under control in a couple of hours and no casualty was reported.