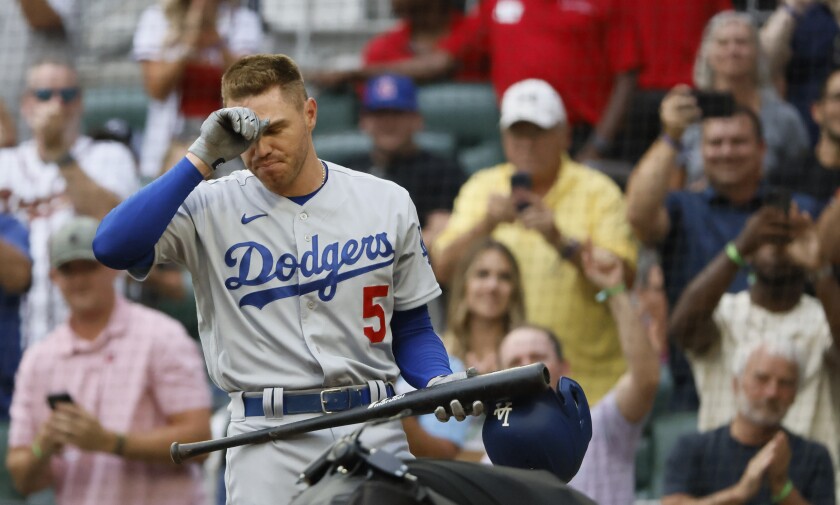 There was the former Dodgers closer, blowing a save against his old team.

There was the Braves one-time closer, also faltering against his former team in a game at Truist Park on Sunday that dragged deep into the night.

And, of course, there was the long-time Braves hero, burning his old club at the end of an emotional reunion weekend back in this city.

In the end, neither Kenley Jansen nor Craig Kimbrel nor even Freddie Freeman were part of the sequence that ultimately decided the Dodgers’ 5-3 extra-innings win — with Chris Taylor and Trea Turner instead providing the go-ahead RBIs to help the Dodgers take two out of three games against their National League nemesis.

But in a series that was all about Freeman’s return to Atlanta, and very well might have served as a preview of a third straight postseason meeting involving the teams this fall, it was too fitting that all three familiar faces featured prominently in getting the game to 11 innings.

“We all know that these are two great teams,” Freeman said, “that have a real good chance of meeting again.”

Initially, it looked as if Sunday’s series finale wouldn’t even reach the bottom of the ninth.

Despite a solid 5 2/3-inning, one-run start from Tony Gonsolin — who reclaimed the best ERA in the majors at 1.58 after requalifying with the league’s minimum-innings threshold — the Dodgers’ offense was kept quiet for eight innings.

Braves starter Spencer Strider shut them out for the first six. Three Braves relievers combined for scoreless frames in the seventh and eighth.

Entering the ninth, the Dodgers were hitless in seven at-bats with runners in scoring position.

And the result seemed so certain, that as he walked off the field a half-inning earlier, Freeman had tears in his eyes — seemingly believing his emotional homecoming was about to come to an end.

“I’m emotionally drained,” Freeman said. “It exceeded all my expectations.”

It lasted a little longer than he was anticipating too.

In search of his second straight save against the Dodgers in the ninth, Jansen recorded two quick strikeouts before getting into trouble.

Gavin Lux hit a single the other way. Taylor lined a base hit to left, then stole second.

Then, with the Dodgers (45-26) down to their final strike, Trayce Thompson — who had been added to the lineup late after Zach McKinstry was scratched because of neck stiffness — hit a floater that just grazed the top of Matt Olson’s glove at first base, falling safely in shallow right field to score both runs.

“[I had] no clue,” Thompson said of the hit, which he initially thought had been fouled off, looking around above him as the ball drifted the other way. “Was just trying to go up there and compete. Happy it dropped for sure.”

Freeman almost delivered a storybook ending in the 10th, hitting a leadoff RBI double down the line that gave his new team a 3-2 lead while silencing his old fans, who welcomed him to the plate at the start of the game with a loud ovation before booing him in key moments the rest of the night.

“Getting booed at Truist Park, I didn’t see that one coming at all in my life,” said Freeman, who went four for 12 in the series.

“But it’s OK. They’re wonderful baseball fans. They care about their team. So I was kind of expecting that at some point.”

Kimbrel, another former Braves star, couldn’t protect the lead. Two pitches into the bottom of the 10th, Olson lined a base hit to center that knotted the score again. William Contreras came close to walking it off later in the inning but watched a deep fly ball to center die at the warning track for the final out.

That kept the game alive for Taylor and Turner in the 11th. Taylor hit an RBI double that was deflected along the foul line by Austin Riley at third base. Turner tacked on an insurance run with a base hit up the middle.

In the bottom of the 11th, Brusdar Graterol was summoned and converted his first career regular-season save, touching 102.5 mph with his fastball despite pitching against the Braves (42-32) for a third straight day.

It might not be the last time it feels that way between the Dodgers and Braves this year, either.

“That team, [there’s] a good chance they’re going to be there at the end of the year,” Taylor said. “To grind one out and win one that way, multiple guys contributing, kind of chipping away, that was a good team win for us.”

City Section football programs on the rise with rebuilds