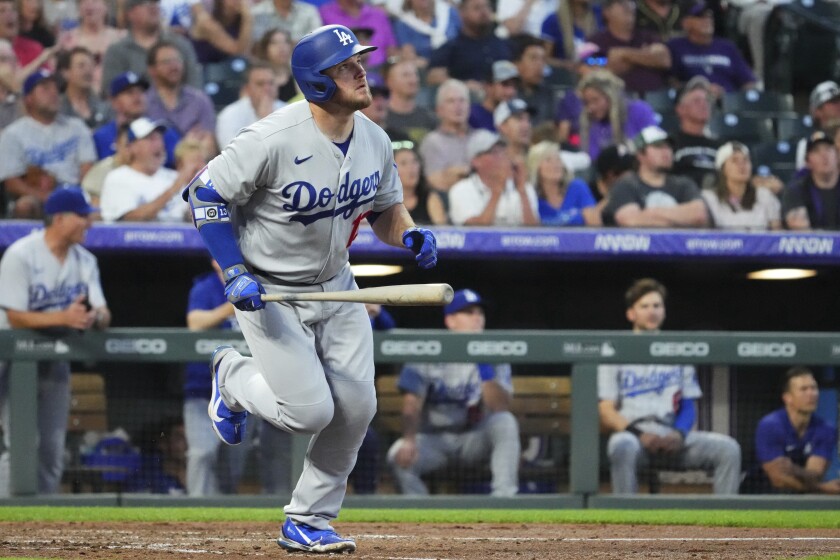 On Monday afternoon, Dodgers manager Dave Roberts thought there was a possible path for Clayton Kershaw to start next month’s All-Star Game at Dodger Stadium.

By the end of Tuesday night, however, those hopes took a serious beating in the left-hander’s worst start of the season.

After giving up six runs in four innings in the Dodgers’ 7-4 defeat to the Colorado Rockies, Kershaw didn’t try to look for positives or put an upbeat spin on his 77-pitch outing.

“[I’m] going to just not overthink it,” he sighed, “and just say I sucked today.”

In 25 starts in the Rockies’ home ballpark, Kershaw has a 4.81 career ERA — almost a full run higher than any other venue he’s pitched in more than once.

However, the high-altitude ballpark was the least of his worries on a night he had as many walks as strikeouts (four each), seemed to lack feel or command of most of his arsenal, and gave up his most earned runs since June 2017.

“I don’t think I would have pitched well anywhere today,” he said.

More seriously, Kershaw later added: “I mean, I can’t expect to pitch well every time. But I haven’t pitched this bad in a while. That’s all I can say.”

Entering the game, Kershaw had a 2.00 ERA that ranked third among National League pitchers with at least 45 innings. It had given life to his bid to potentially start the All-Star Game, despite him missing a month earlier this season with a back injury.

“If he goes out there and continues to pitch well,” said Roberts, who will be a coach on the National League staff, “I think it would almost be a no-brainer for him to start the game.”

Instead, Kershaw’s season ERA jumped to 2.94 after Tuesday, his string of six straight starts giving up two runs or fewer snapped in disheartening fashion.

“It was just one of those nights where he didn’t have his pitch mix working,” Roberts said.

The Dodgers (45-28) briefly led early on, getting an RBI single from Justin Turner in the top of the first and a solo home run from Hanser Alberto that broke a 1-1 tie in the second.

But then Rockies left-hander Kyle Freeland hit a stride, going on to pitch a six-inning, three-run start.

Kershaw’s outing, meanwhile, spiraled in the opposite direction.

In the bottom of the second, he gave up a leadoff home run to Randal Grichuk on a hanging slider, then two more runs on three singles and two walks.

Kershaw issued four free passes in the opening two innings after allowing just seven in the first 45 innings this season.

In the third, Elias Díaz cranked a long solo blast to left. In the fourth, the Rockies (33-42) scored again with a two-out rally that culminated in an RBI single from José Iglesias, making it 6-2.

That marked the end of Kershaw’s night — and any real drama in the outcome of the game. Over the final seven innings, the Dodgers’ had only two runs — a Max Muncy solo homer in the sixth and a Trea Turner homer in the ninth.

In five games at Coors Field this year, the team is 1-4 and has scored only 15 runs.

“Before this year we’ve played really well here,” Roberts said. “But this year for some reason we just can’t win games here.”