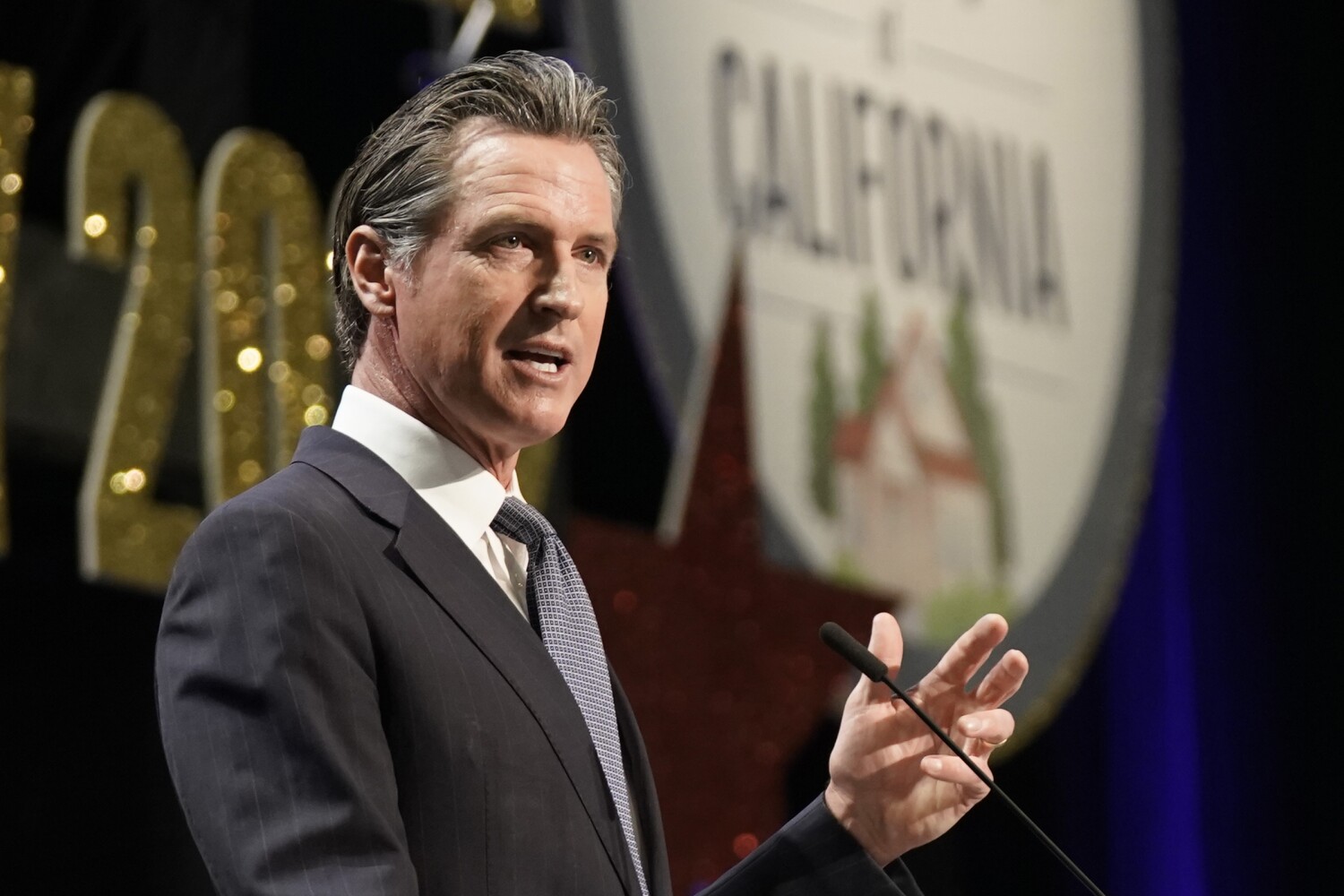 Nearly three years ago, when Gov. Gavin Newsom joined LeBron James and his ensemble to sign California’s historic “Fair Pay to Play Act” into law on James’ HBO show “The Shop,” Newsom was more than happy to tell the truth about college sports. In fact, he seemed downright giddy.

“The jig’s up,” Newsom said on Sept. 30, 2019. “Billions and billions of dollars, 14-plus billion dollars goes to these universities, a billion-plus revenue to the NCAA themselves, and the folks who are putting their lives on the line, putting everything on the line, are getting nothing.”

Newsom rightfully predicted that Senate Bill 206, which allowed California college athletes to profit from the use of their name, image and likeness (NIL) for the first time, was going to induce a flood of similar legislation across the country, forcing the NCAA’s hand and forever altering the “power arrangement” between player and school.

“School presidents,” Newsom said without hesitation. “They don’t even outsource the phone calls. ‘What the hell are you doing destroying college sports?’ … ‘You’re destroying the purity of amateurism.’ Not once did they talk about the needs of these kids.”

Right before signing the bill, there was a smugness about Newsom as he said, “I don’t want to say this is checkmate. But this is a major problem for the NCAA.”

Three weeks ago when UCLA ditched the Pac-12 Conference and University of California system peer UC Berkeley for the Big Ten, the big business of college sports suddenly became a major problem for Gavin Newsom.

Or at least that’s how he played it Wednesday when he blasted UCLA’s handling of its Pac-12 exit, saying that the public university was unacceptably secretive and disregarded the harm the move will bring to Berkeley and other league members. Once again showing a flare for the dramatic, he made an unusual appearance at the San Francisco meeting of the UC Board of Regents to join the board’s closed discussion on the issue.

“The first duty of every public university is to the people – especially students,” said Governor Gavin Newsom. “UCLA must clearly explain to the public how this deal will improve the experience for all its student-athletes, will honor its century-old partnership with UC Berkeley, and will preserve the histories, rivalries, and traditions that enrich our communities.”

Newsom is now taking on the banner of the same university presidents that he shrugged off when it suited him on the high-profile NIL issue, the same higher education leaders who have watched their athletic departments lose their souls in pursuit of the almighty football dollar and looked the other way as the donations from proud alums piled up.

Thanks to the peculiar experiment that is American college sports, much of those donors’ pride over the years has been at least partly based on their alma maters’ athletic achievements and enjoying bragging rights over a rival.

Yet, the presidents of every California Pac-12 school lobbied hard against NIL because they feared — correctly — that college athletes receiving money of any kind, even from third parties and not the schools themselves, would inevitably lead to full-on professionalization, players being classified as employees and directly sharing in the revenues they’ve helped to produce.

So of course they were calling Newsom panicking back then. They also knew the jig was about to be up.

Newsom did the right thing in signing the NIL bill. History will applaud him for it. But for him to act now like it’s a shock that UCLA athletics would knife the UC system and its Pac-12 brethren in the back to gain potentially $70-plus million in yearly revenues and wipe out more than $100 million in debts is disingenuous and intellectually insulting to taxpayers and voters.

If Newsom wants to have a more nuanced conversation, he should know that the future of NIL and where athlete pay is headed played a significant role in why USC and UCLA knew they had to leave the floundering Pac-12 for the Big Ten, which is in the process of negotiating a media rights package reported to go well over $1 billion with the addition of the Los Angeles schools.

Here in California, there is already a petition sitting with the National Labor Relations Board that is asking for USC and UCLA athletes in the revenue-producing sports to be classified as employees — a notion that has been approved of by NLRB general counsel Jennifer Abruzzo. We can assume that USC and UCLA’s move to the Big Ten, which will ask athletes to make frequent cross-country trips to compete while balancing their studies, is only going to bolster the argument they are being treated differently than normal students for the university’s financial benefit.

It could take months, or years, or a decade to get there, but once college football and men’s basketball players are employees, they will collectively bargain for a share of revenues, which will put a major dent in athletic department budgets that depend on the windfall from those sports to fund their nonrevenue teams.

USC and UCLA leaders — the same ones that were trying to persuade Newsom not to sign the NIL bill — were forward thinking enough to see that they had no choice but to thrust their hands into the Midwestern money jar if they wanted to keep Trojans football fans and Bruins basketball fans who expect national championship contention happy long term.

Cal and many other schools nationwide who won’t get the invite to the Big Ten or Southeastern Conference will have big decisions to make about whether they want to go along with the model of college sports as pro sports when they simply won’t have the revenue or the conference standing to compete at the highest level anymore.

So much of this is sad, but there’s no way around it because capitalism is doing its thing. USC and UCLA got their chance to stay in the game and took it like any other Pac-12 school would.

Newsom should revisit his talking points from 2019. He wanted to weaken the NCAA, and he certainly accomplished that goal. But it’s almost like he forgot that a weakened NCAA meant a weakened UC system.

2019 Newsom was seeing the situation clearly. This is the bed university presidents have made for themselves during the past four decades, and now it’s all messy. It’s not the governor’s job to clean it up.