Putin Wins Strong Support From Iran Over Invasion Of Ukraine 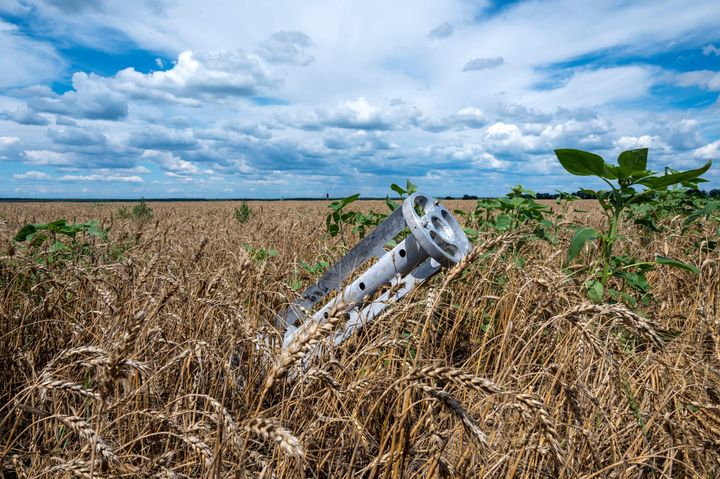 In Kramatorsk, a city in eastern Ukraine’s Donetsk province considered a likely Russian occupation target, one person was killed and 10 wounded in an airstrike that hit a five-story apartment building, regional Gov. Pavlo Kyrylenko said.

Fresh blood stained the concrete amid green leaves that were torn off trees as nearby apartments on at least two floors burned. Shrapnel was placed in a small pile near an empty playground.

“There was no one here. Everything is ruined,” said Halyna Maydannyk, a resident of one burned apartment. “Who knows why they’re doing this? We were all living peacefully.”

Kramatorsk residents Mykola Zavodovskyi and Tetiana Zavodovska stood in bandages outside a hospital. They heard a loud clap and went to their balcony to investigate, then everything exploded and the windows shattered.

The midday strike came after Kyrylenko had reported four earlier Russian strikes in Kramatorsk and urged civilians to evacuate.

On the political front, Putin visited Tehran, where Iran’s Supreme Leader Ali Khamenei said the West opposes an “independent and strong” Russia. Khamenei said that if Russia hadn’t sent troops into Ukraine, it would have faced an attack from NATO, echoing Putin’s own rhetoric and reflecting increasingly close ties between Moscow and Tehran as they both face severe Western sanctions. NATO allies have bolstered their military presence in Eastern Europe and provided Ukraine with weapons to help counter the Russian attack.

The Tehran talks also touched on attempts to unblock Ukrainian grain exports, a problem that is causing global shortages and driving up food prices. Putin told reporters after his meetings that Russia would help facilitate such shipments if the West lifts restrictions on Russian grain exports. He noted that “the Americans have effectively lifted the restrictions on Russian fertilizer supplies to global markets,” adding that “if they sincerely want to improve the situation in the global food market, I hope they will do the same with Russian grain exports.”

In the Odesa region in southern Ukraine, Russian forces fired seven Kalibr cruise missiles overnight. The Russian Defense Ministry said strikes on the village of Bilenke achieved a legitimate military goal and “destroyed depots of ammunition for weapons supplied by the United States and European countries.”

“What did they hit?” Zelenskyy asked in his nightly video address Tuesday. “An ordinary rural field and a non-working farm, rural houses, outbuildings, a lyceum, a cultural center. No military sense. Just terror.”

With indications that Ukraine is planning counterattacks to retake occupied areas, the Russian military in recent weeks has targeted Odesa and parts of southern Ukraine where its troops captured cities earlier in the war.

In the east, Ukrainian forces are fighting to hold onto the declining territory under their control. Donetsk has been cut off from gas supplies and partly from water and power as the Russians try to complete their capture of the province. Russia’s ground advance has slowed, in part because Ukraine is using more effective U.S. weapons and partly because of what Putin has called an “operational pause.” Russia has been focusing more on aerial bombardment using long-range missiles.

Truly grateful to 🇺🇸 President @POTUS, the 🇺🇸 people for continuing effective support of 🇺🇦 in countering Russia’s aggression. More #HIMARS, 155mm shells are our priority needs. It is what helps us press on the enemy. We appreciate the 🇺🇸 support! Let’s go to victory together!

“The infrastructure of the cities is being methodically destroyed by missile strikes, and the civilian population, cut off from bare necessities, suffers the most,” Kyrylenko said.

Russian-installed officials in the southern region of Kherson, under Moscow’s control since early in the war, said Ukrainian forces damaged the only bridge in the city of Kherson over the Dnipro River, east of Odesa. Kirill Stremousov, the deputy head of the Kherson region’s Kremlin-backed administration, told the Russian news agency Interfax that Ukrainian forces used American-made rocket launchers to damage the bridge in an attempt to cut Kherson off from the left bank of the Dnipro.

Ukrainian officials have spoken of plans for a counter-offensive to retake Kherson and other southern Ukrainian territory from the Russians.

Serhiy Khlan, an official with the Ukrainian administration of the Kherson region, tacitly confirmed the strike on Ukrainian television, reporting “a precise hit” and explosion in the area of the bridge.

Also in the Kherson region, Ukraine claimed to have used anti-aircraft missiles to shoot down a Russian Su-35 fighter jet that had planned to attack its planes. Several ground-based videos posted on social media showed a plane breaking up in the evening sky Tuesday near Nova Kakhovka, in flames and spewing gray and black smoke as it descended and crashed into the ground, at least some pieces into a green field. Ukrainian news reports said the pilot ejected and showed a helicopter search for him. Russian officials didn’t immediately confirm the shootdown. Little information has emerged during the war about aerial battles.

Kherson — hosting a major ship-building industry at the confluence of the Dnieper River and the Black Sea near Russian-annexed Crimea — is one of several areas a U.S. government spokesman said Russia is trying to annex. Following months of local rumors and announcements about a Russian referendum, White House national security council spokesman John Kirby said Tuesday that U.S. intelligence officials have amassed “ample” new evidence that Russia is looking formally to annex additional Ukraine territory and could hold a “sham” public vote as soon as September. Russia is eyeing Kherson as well as the entirety of the Luhansk and Donetsk oblasts.

“Russia is laying the groundwork to annex Ukrainian territory that it controls in direct violation of Ukraine sovereignty,” Kirby said in Washington.

Kirby also said the White House is expected to announce more military aid for Ukraine later this week. The aid is expected to include more High Mobility Artillery Rocket System, or HIMARS, a critical weapon Ukrainian forces have been using with success in their fight to repel Russian troops.

On the ground, Ukraine and Russia continued their sporadic exchanges of bodies of fallen soldiers. Each side gave the other 45 soldiers’ bodies in the Zaporizhzhia region. Russia’s Ria-Novosti news agency said Tuesday the soldiers had been killed in Mariupol, the Azov Sea city that captured worldwide attention because of a weeks-long siege of a steel plant.

At least two civilians were killed and 15 wounded by Russian shelling across Ukraine over the past 24 hours, Ukraine’s presidential office said in a Tuesday morning update.

With Russia’s missiles hitting cities 799 kilometers (497 miles) apart Tuesday, “there remains a high level of threat of missile strikes throughout the territory of Ukraine,” said Oleksandr Shtupun, spokesman of the General Staff of the Ukrainian armed forces.

The missile strikes came as the British military said it believes Russia is struggling to keep up its troop strength in its grinding war of attrition that began with the Feb. 24 invasion of Ukraine.

The British Defense Ministry said in a Tuesday assessment that Russia “has struggled to sustain effective offensive combat power since the start of the invasion, and this problem is likely becoming increasingly acute” as Moscow seeks to conquer the Donbas region of eastern Ukraine.

The British military added: “While Russia may still make further territorial gains, their operational tempo and rate of advance is likely to be very slow without a significant operational pause for reorganization and refit.”

In other developments Tuesday:

— Ukraine’s parliament approved President Volodymyr Zelenskyy’s dismissal of Ivan Bakanov as head of the country’s Security Service, the SBU, and the Ukrainian leader on Tuesday finalized the firing of Iryna Venediktova, who served as Ukraine’s prosecutor general. As part of the reshuffle stemming from alleged collaboration with Russian authorities, Zelenskyy on Tuesday also fired six other SBU officials.

— Ukraine’s first lady, Olena Zelenska, visited Washington at the invitation of U.S. first lady Jill Biden. Zelenska met Monday with Secretary of State Antony Blinken, who assured her of the U.S. commitment to Ukraine, and praised her work with civilians dealing with trauma and other war damage. At the White House on Tuesday, Zelenska met with Jill Biden, embracing and posing for photos before discussing how the U.S. is helping Ukrainians suffering mentally and emotionally from the war.

Cara Anna contributed to this report from Kramatorsk.

Follow the AP’s coverage of the war at https://apnews.com/hub/russia-ukraine