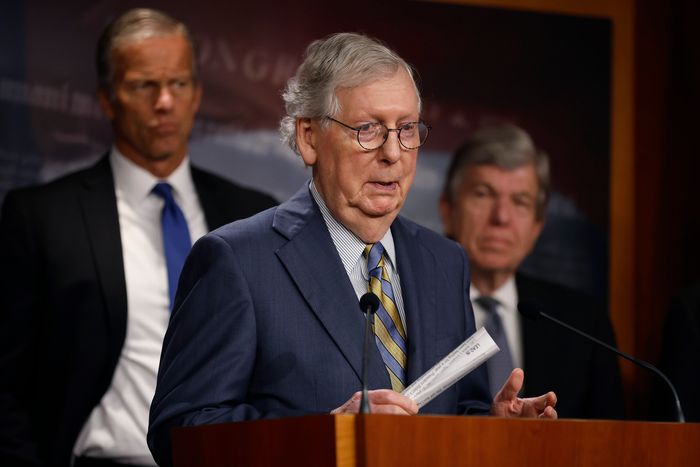 WASHINGTON—A bipartisan bill subsidizing domestic semiconductor production cleared its first procedural hurdle on Tuesday in a 64-34 vote, even as the details of the legislation are still being worked out.

The legislation would provide roughly $52 billion in subsidies to encourage chip companies to boost production in the U.S., seen by the White House and leaders of both parties as a critical national-security need. Lawmakers worked until late Tuesday to negotiate other elements in the larger competitiveness package, dubbed USICA.

The vote paves the way for a larger package that would include additional funding for scientific research. Ahead of the vote, Senate Majority Leader

(D., N.Y.) said he would use the result to gauge whether there was enough Republican support for the additional funding, which has been under negotiation for more than a year.

“This will be a test vote, and the outcome will decide whether the science portion of USICA is included,” Mr. Schumer said, while adding he personally supports a larger proposal.

Tuesday’s motion needed only 51 votes to pass, but Mr. Schumer said because it received more than 60 votes—enough to comfortably overcome a Senate filibuster and advance, he would move forward with adding the science funding. That would back early-stage research using technology in water systems, technology and behavioral health, precision agriculture, and other sectors. It will also bolster technology education.

The Senate last year approved an expansive version of USICA that included significant increases in federal funds for scientific research. It focused on cutting-edge technology research in areas such as quantum computing and artificial intelligence. In all, it authorized around $190 billion in spending in addition to the semiconductor subsidies, according to a congressional analysis.

But the Senate and House failed to come to agreement on specifics of the new science funding in recent weeks, causing Senate leaders this week to drop that portion of the legislation from their latest proposal. Other provisions on trade, labor, climate and commerce also fell by the wayside in recent days.

Tuesday’s procedural vote was a test of whether any of those provisions can be revived in the new slimmed-down version of the package. Senators are still scrambling to finalize the bill text in preparation for later votes this week and final passage next week.

“This is the land of USICA where things change on a minute-to-minute, hour-to-hour basis,” Sen.

(R., Ind.) said. He said he thought he was close to having enough Republican support to move the bill through the Senate.

(R., Ky.) told reporters he wasn’t willing to vote yes on Tuesday’s procedural motion until he had seen legislative text, but he said other Senate Republicans might make different decisions.

“Myself, I’m not going to vote to proceed until I know what we’re proceeding to. But there are others in our conference who may decide otherwise,” he said.

Asked about the cost of the bill and whether it needed to be offset by cuts elsewhere, Mr. McConnell said he viewed the spending as important to national security.

Lawmakers are coalescing around the so-called guardrails portion of the bill, which would ban chip makers who receive incentives to build in the U.S. from then using that money to build in China or other adversarial countries.

Lawmakers are also negotiating tax credits for research and development to increase U.S. competitiveness long-term. Along with $50 billion in subsidies for chip makers, the legislation will likely allocate $2 billion for the Department of Defense to create a national network of university-based prototyping and development of semiconductor technologies that funds testing to ensure the chips can be manufactured at scale.

The Biden administration has come on board with a slimmed-down bill, saying it will push to pass other elements of the legislation later. Among the high-profile provisions that appeared likely to be cut were proposed national-security reviews of some outbound U.S. foreign investments; waivers of tariffs on Chinese imports; and curbs on the sale of counterfeit goods online, among other provisions.

“There are several parts of the broader legislation that are important and I am committed to doing whatever it takes to get them over the finish line in this Congress,” Commerce Secretary

said in a statement. “But chips funding is the only part of this bill that we have to pass right now to avoid facing devastating consequences.”

What aspects of the Democratic legislative agenda do you think are salvageable? Join the conversation below.

Democrats and Republicans have voiced support for the bill, which is much more pared down that the House version that passed in February. Democrats included legislation addressing economic inequality and climate change, drawing criticism from Republicans who said it should focus solely on competitiveness with China.

The House is expected to bring up the bill should it pass the Senate.

Mr. Schumer said Tuesday that he expects many of the provisions left out of the narrower bill to continue to be negotiated between lawmakers in the House and Senate, and he raised the possibility of voting on any compromise they come up with after lawmakers return from Congress’s August recess.

“There are lots of things Republicans and Democrats want in the eventual bill that will not be in this bill, even if science is included,” Mr. Schumer said. “We’ll have bipartisan desire to get a [compromise] done.”

—Lindsay Wise and John D. McKinnon contributed to this article.

Write to Natalie Andrews at Natalie.Andrews@wsj.com