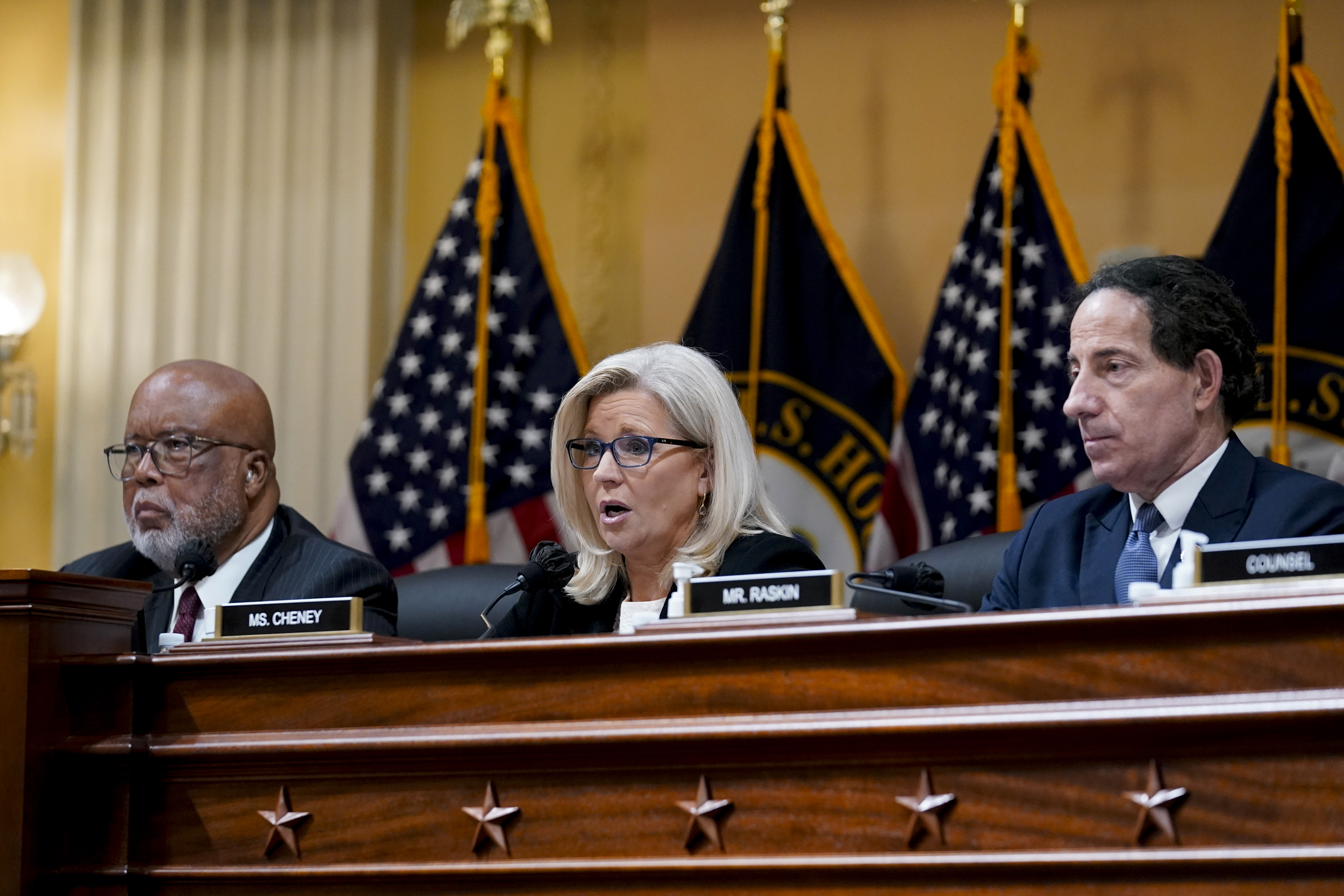 WASHINGTON — While rioters stormed the Capitol on Jan. 6, then-President Donald Trump sat idly in a private dining room adjacent to the Oval Office watching the brutal clash unfold on television.

It is those minutes — 187 of them between his rally speech urging a march to the Capitol and his tweet asking for calm — that the House committee investigating the insurrection brought into focus at its second primetime hearing Thursday night.

In sometimes explosive testimony, witnesses appearing in the hearing room and in pre-recorded testimony detailed an urgent effort to convince Trump to speak publicly to help stop the violence — and Trump declining to act. They confirmed prior testimony about a furious Trump ordering his security team to take him to the Capitol rather than back to the White House after his remarks. And the committee played audio of then-Vice President Mike Pence’s Secret Service team trying to find a path to safety through smoke and protesters at the Capitol.

Pence’s security team came close to “having to use lethal options” to get him out safely, an unnamed White House security official said in an audio recording. As that was happening, Trump tweeted that Pence lacked courage.

Trump aides and family members pleaded with the commander in chief to quell the violence, then-White House counsel Pat Cipollone said in recorded testimony. He appeared to confirm that his advice to the president was to make a statement.

“I can’t talk about conversations with the president,” Cipollone said, “but I can generically say that I said people need to be told, there needs to be a public announcement fast that they need to leave the Capitol.”

Several witnesses in key positions testified that they were unaware of any attempt by Trump to mobilize the military or law enforcement to help quell the insurrection. Instead, Rep. Elaine Luria, D-Va., said, Trump asked for a list of senators to call and dialed longtime adviser Rudy Giuliani.

“This man of unbridled, destructive energy could not be moved — not by his aides, not by his allies, not by the violent chants of rioters or the desperate pleas of those facing down the riot,” Chairman Bennie Thompson, D-Miss., said. Thompson spoke over video and turned over the responsibilities of the chair to Vice Chair Liz Cheney, R-Wyo., because of a recent Covid diagnosis.

“And more tellingly, Donald Trump ignored and disregarded the desperate pleas of his own family, including Ivanka and Don Jr.,” Thompson added.

If the committee is successful, it will show that Trump not only tolerated the violence waged on his behalf — and against the peaceful transfer of political power at the heart of American democracy — but that he was pleased.

“The mob attacking the Capitol quickly caused the evacuation of both the House and Senate,” Rep. Adam Kinzinger, R-Ill., said. “The count ground to an absolute halt, and was ultimately delayed for hours. The mob was accomplishing President Trump’s purpose, and he did not intervene.”

Matthew Pottinger, a national security official, and Sarah Matthews, a press aide, both of whom were in the White House Jan. 6, testified in person Thursday.

Cheney said the hearing, the committee’s eighth, would not be its last. Citing incoming evidence and legal fights to compel testimony, Cheney — who faces an uphill bid for re-nomination in Wyoming in August — vowed the committee would resume hearings in the fall.

“We have far more evidence to share, and more to gather,” she said. “So, our Committee will spend August pursuing emerging information on multiple fronts, before convening further hearings this September.”

After three hours of mayhem following his appeal for supporters to march to the Capitol on Jan. 6, Trump would eventually ask the rioters to go home peacefully.

During that time, according to prior testimony from Hutchinson, an aide to then-Chief of Staff Mark Meadows, Trump was informed that rioters were attacking the Capitol and that some were chanting “hang Mike Pence,” the vice president and man responsible for overseeing the congressional count of electoral votes that sealed Trump’s 2020 re-election defeat.

“Within 15 minutes of leaving the stage, President Trump knew the Capitol was besieged and under attack,” Luria said.

After Trump’s speech, he was “adamant about going to the Capitol” and had a “heated” exchange with his security detail, retired D.C. Police Sergeant Mark Robinson, who was part of the presidential motorcade, testified he was told.

His testimony corroborated a prior claim from former White House aide Cassidy Hutchinson, and Robinson added that the motorcade was told — once Trump had returned to the White House — to stand by in case he wanted to move to the Capitol.

In its series of hearings, the committee has heard evidence that Trump and a team of outside advisers pursued all available means to try to overturn the election, often in conflict with official White House lawyers and advisers.

That effort included Trump’s direct request to Georgia Secretary of State Brad Raffensperger to find exactly the number of votes it would have taken to change the outcome in that state. Raffensperger, a Republican, declined.

It also included a campaign to persuade legislative leaders in key swing states to replace duly chosen slates of electors with alternates that would back Trump, according to the testimony of Arizona state House Speaker Rusty Bowers, a Republican, and others. When that failed, Trump’s outside advisers organized “fake electors” in the states, which were transmitted to Pence and the National Archives.

Republican National Committee Chair Ronna McDaniel testified in one video clip that Trump called to introduce her to John Eastman, a lawyer who wanted the RNC to help “gather” what she called “contingent electors.”

At the same time, Trump pressured then-Attorney General William Barr and other Justice Department officials to declare that the election had been riddled with fraud. When Trump learned that Barr had said in a news interview that the Justice Department had concluded there was no widespread fraud, Barr testified, the former president was livid.

“Just say the election was corrupt and leave the rest to me and the Republican congressmen,” Trump implored in a Dec. 27, 2020, conversation memorialized in Donoghue’s contemporaneous notes. In a wild Oval Office meeting, Trump threatened to replace Rosen with Jeffrey Clark, a lower-level Justice official who supported the “fake electors” plan, according to witnesses.

By early January, Trump had trained his focus on flipping Pence, according to aides to both men who have testified at prior hearings. Trump berated Pence for refusing to tamper with the electoral count in a phone call Jan. 6, with one witness saying he called his second in command “the p word.”

Trump, according to documents obtained by the committee, added references to Pence into his “Stop the Steal” rally speech. He told supporters that Pence was the only man who could keep him in office as he instructed them to march to the Capitol.

When he was told backstage that the crowd was thinner because some of his supporters were armed and didn’t want to go through magnetometers — metal detectors — he lashed out, according to Hutchinson.

“I don’t f—ing care that they have weapons,” Trump fumed, according to Hutchinson. “They’re not here to hurt me. Take the f—ing mags away.”

He would become more upset after the rally when his security team told him he was being taken back to the White House, rather than to the Capitol, where he had promised to join his supporters, Hutchinson testified.

Then, as rioters attacked police, breached the Capitol, and marauded through the Senate chamber and congressional offices, Trump watched the events unfold from the relative calm of one of the most secure sanctums on the planet.