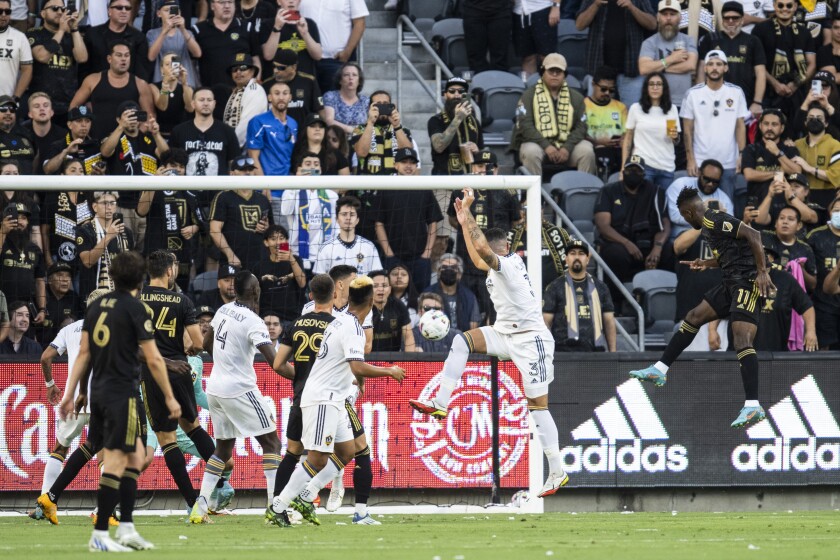 Hundreds of LAFC season-ticket members received emails this week informing them they will not be allowed to renew their tickets after reselling “a substantial portion” of them on the secondary market.

The team, which has long said it considers its season-ticket holders to be members of its family, declined to explain on the record why it was canceling hundreds of accounts, many dating to the team’s founding. But Seth Burton, senior vice president for communications and content, said the team would work with anyone who feels their accounts have been wrongly targeted.

“LAFC is happy to have a conversation with any of the affected members and if there were errors made then we will work to rectify the situation,” he wrote in a text message.

Several people contacted by The Times insisted they were loyal supporters who actively attended games in the team’s first two seasons but haven’t felt safe returning during the COVID-19 pandemic.

“I understand trying to stop scalping. But doing this during COVID?” said Steve Jarrard, who hasn’t attended a game in person since early in the 2020 season.

Jarrard, a film and TV prop master from Burbank, and his girlfriend, an actress, have suffered financially during the pandemic. Yet they estimate they’ve spent more than $10,000 on tickets and LAFC merchandise while losing money on the tickets they’ve resold.

The pair’s two tickets are in his girlfriend’s name and Jarrard said she didn’t want to be identified because she feared her ticket reinstatement appeal would be denied for speaking publicly about the matter. The couple want to keep their tickets behind the south goal, he said, because they plan to return to Banc of California Stadium when the pandemic is over.

“She was devastated,” Jarrard said of his girlfriend’s response to the team’s terse three-paragraph email. “She loves the team. I guess LAFC has a policy of taking away people’s seats during a pandemic.”

Despite the club’s statement, Jarrard and others who spoke to The Times said the tickets representatives they talked to told them there was nothing they could do to reinstate their accounts.

One fan who, like Jarrard, opened his season-ticket account long before the team played its first game, said he has comorbidities that make attending games in the current environment potentially life-threatening.

“I’m a loyal fan. I plan on going to games. This year it hasn’t worked out,” said the man, who asked not to be identified by name because he was concerned about losing his appeal to keep his season tickets. “I’ve definitely lost money. It’s for love of the team.”

“I have sent a note of appeal explaining my situation,” he added. “I do fear retaliation though. … I’m a little annoyed. Especially the fact that we’re in a state of emergency still.”

Dozens of comments on LAFC social-media accounts told similar stories. Even fans in the north grandstand, home to the rabid 3252 supporters’ group, have complained of having their tickets revoked.

“It seems like a pretty strange decision when the pandemic isn’t over,” one person posted on Reddit.

“It sucks that this happen[ed],” another wrote on Facebook. “The FO office should call some of us to ask why we have to do this. I love this club.”

“No warning. No rule on how many they consider ‘too many.’ Just boom,” one affected season-ticket holder wrote in an email. “Unreal.”

LAFC, in its fifth MLS season, has announced sellouts for every game in which full crowds were allowed at Banc of California Stadium. The club says it has more than 17,000 season-ticket holders and a waiting list of several thousand more — a list that is growing now that the first-place team has added big-named European stars Gareth Bale and Giorgio Chiellini.

“The fact they didn’t say anything until after Bale was announced looks really bad,” a fan complained on Reddit. “And if we end up being reinstated it suggests that it’s not that much of a ‘violation’ after all.”

An attorney from the San Fernando Valley, who bought his season tickets before the team had played a game, spoke about the situation on the phone twice Wednesday but declined to use his name because he, too, fears it will affect the status of his appeal. He doesn’t want to point fingers or speculate on reasons for the team’s decision, he explained. He just wants his tickets back.

“It’s a team I love. A team I’ll support regardless,” he said. “I definitely want to continue to be a season-ticket holder.”