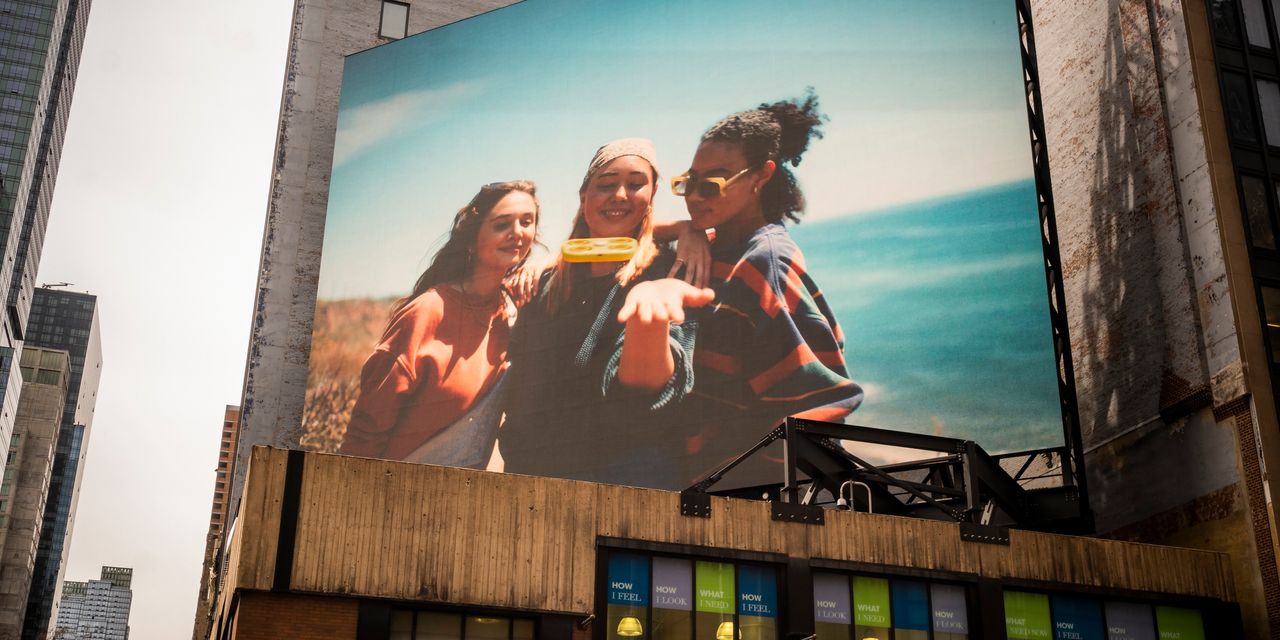 posted its weakest-ever quarterly sales growth as a public company, highlighting the extent of the upheaval the digital-advertising market is suffering from economic turmoil and other factors.

The parent company of popular photo-sharing social-media app Snapchat on Thursday said that revenue for the April through June period was $1.11 billion, narrowly missing scaled-back Wall Street expectations, according to analysts surveyed by FactSet. The 13% year-over-year sales growth in the second quarter was even lower than what the company registered early in the pandemic, when it slipped to 17%, and Snap said sales in the current period so far were roughly flat from a year ago.

in a statement, said that the most recent quarter’s results “do not reflect our ambition.”

Snap shares closed up more than 5% Thursday, but tumbled more than 26% in after-hours trading on the results.

Snap, which posted a $422 million net loss for the second quarter, also said it would “substantially” reduce its rate of hiring, joining other tech companies that are tightening their belts. Other tech companies, including

have taken similar steps. Snap’s Chief Financial Officer Derek Andersen said on an earnings call that head count would essentially remain flat and that the company would look to tightly control other operating expenses.

Snap said it is contending with a confluence of headwinds. Macroeconomic challenges are causing companies to pull back on ad spending, platform changes have affected the ability to deliver ads and it said it is seeing “increasing competition for advertising dollars that are now growing more slowly.” Given the market uncertainties, the company said it wasn’t issuing any forecasts for sales or adjusted earnings for the current quarter.

The Santa Monica, Calif.-based company’s results are scheduled to be followed by

on Friday, and next week by the heavy hitters in the digital-ad market, Meta and Google parent

Snap’s news pulled shares in other digital platforms lower after hours. Meta traded down more than 4%, Alphabet was off more than 2% and

In May, Snap said it anticipated revenue and earnings to come in lower than it had projected only a month earlier, when it posted first-quarter results, because of continuing problems in the ad business. That profit warning sent its shares tumbling 43%.

Rising inflation and concerns about the economic downturn have weighed on advertising spending generally. Changes to

privacy policy in 2021 requiring social-media apps to ask users whether they want to be tracked also have hit digital-ad-focused businesses.

That has left Snap and similar businesses searching for new sources of revenue, including eyeing certain paid, premium services for users. Twitter rolled out Super Follows in September 2021, enabling content creators to charge their followers for exclusive content.

Mr. Spiegel said on Thursday that the company is evolving to revitalize sales as it hunts for new and more diverse sources of revenue.

In late June, Snap launched a monthly Snapchat subscription option—called Snapchat+—that would give paying members exclusive access to certain features and early access to others that will eventually roll out on the platform.

a Snap co-founder, entered long-term agreements to remain in their roles through at least Jan. 1, 2027.

Snap’s board of directors also approved a $500 million stock buyback through the next year, the company said.

Write to Sarah Donaldson at sarah.donaldson@wsj.com

Appeared in the July 22, 2022, print edition as ‘Sales Growth at Snap Weakest Since Listing.’