The creator of Mookie Betts’ viral T-shirt has a message for Black and Latino L.A. 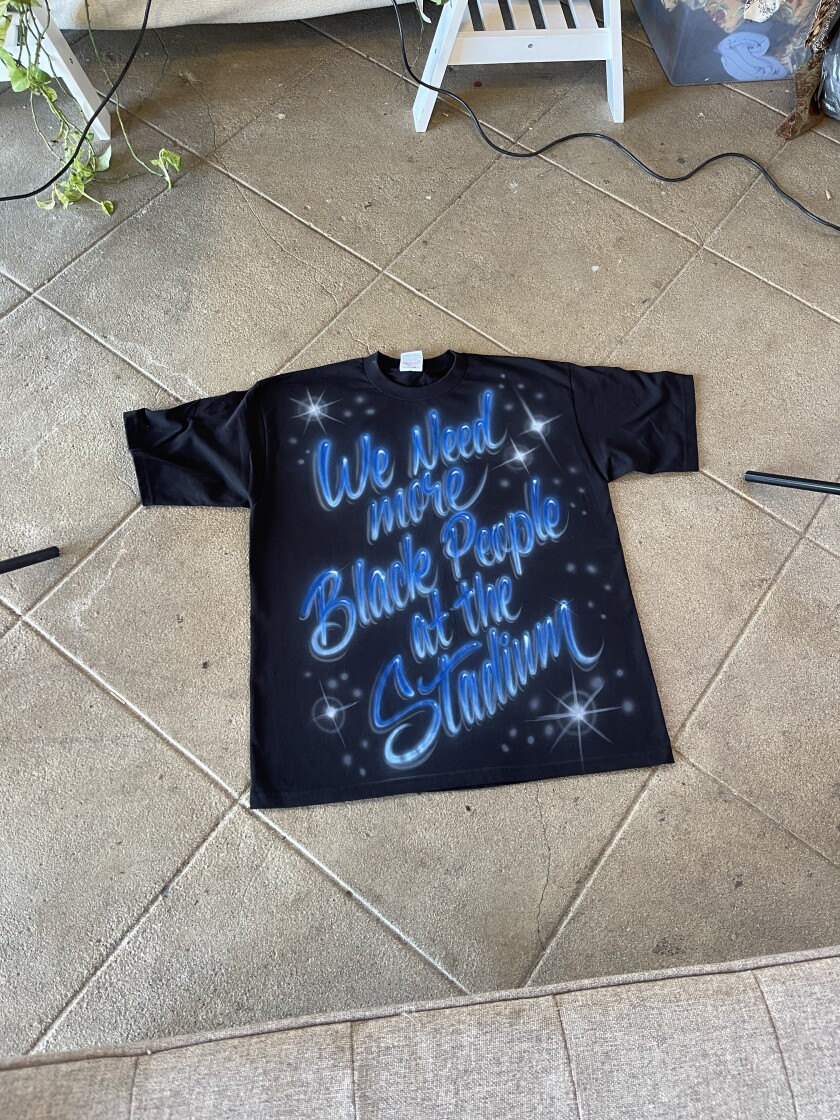 Airbrushed in Dodger blue and white, the paint lay fresh on a black T-shirt as clothing designer Kacey Lynch whipped out his phone to snap photos of his new creation.

Lynch, owner and founder of Bricks & Wood, a streetwear brand created in his native South-Central Los Angeles, grew up going to Dodgers games with his grandfather. Lynch’s colleague, Malik Coney, who at one point interned for the Dodgers, also grew up a baseball fan in L.A.

The pair wanted to call out what they saw as a lack of Black fans at Dodger Stadium, but also a lack of Black representation in a sport that remains overwhelmingly white.

“We really want to highlight and create comfortability for the people who feel like, ‘You know what? I can’t play that sport, or I can’t go in this area, or I can’t be this type of person, because of the fact that there’s no representation of people that look like myself in it,’” Lynch said. “You can still be your true self in rooms that are unfamiliar or that don’t have the same representation as you all the time.”

Major League Baseball officials have tried to attract more Black Americans to watch and play the sport by investing in youth baseball programs over the last decade. Despite the effort, this season 7.2% of players on opening day rosters were Black Americans, a drop from 7.6% last year.

Lynch said such disparities in representation are reflected in L.A. as a whole, who gets recognition and whose voices are included. When Bricks & Wood and the Dodgers agreed to a partnership last year to design a new line of team apparel, Lynch wanted to make sure his South-Central roots showed through.

“I think it’s just us not getting lost in what really builds a huge part of the culture here,” Lynch said. “The Black and brown conversation, it’s an undeniable thing that you can’t really overlook — the Latino culture, the Black culture.”

And for Lynch, Dodgers culture has always been Black and Latino.

In historically Black and Latino neighborhoods such as South-Central L.A., East L.A., Echo Park and Highland Park, Dodger blue and the team’s “L.A.” logo is omnipresent, Lynch said, from murals to fashion to the branding of local businesses.

“The L.A. logo itself is bigger than the Dodgers,” Lynch said.

For the airbrush art on the T-shirt, painted by Los Angeles-based Guava LA, Lynch drew inspiration from childhood visits to the Slauson Super Mall, also known as the Slauson swap meet, where he would see local shops airbrushing script and designs onto T-shirts and trucker hats.

In the days leading up to the All-Star Game, Lynch tried to get his new line of caps in front of Dodgers players. But what caught the eye of Betts, a six-time all-star, two-time World Series champion and among the few Black American MLB stars today, wasn’t Lynch’s official team gear but the airbrushed T-shirt, which was released separately.

The shirt was not meant to make an appearance at the All-Star Game but instead during the home run derby the night before, Lynch said. A shipping delay caused the shirt to be delivered just hours before the All-Star Game’s opening pitch.

After seeing Betts wear a different outfit during the derby, Lynch wasn’t sure the Dodgers superstar would wear it at all.

“I was like, ‘Well if he doesn’t wear it at this point, then you know, I wouldn’t be surprised,’” Lynch said. “I wasn’t bothered by it. But then, my phone start flooding, and I was like, ‘Oh, there you go.’”

It wasn’t the first time a public figure wore Lynch’s apparel. In 2018, musical artist Tyler the Creator sported several of Lynch’s beanies during a GQ photoshoot. In the months after, Bricks & Wood took off in popularity.

But before Tuesday’s game, as Lynch watched the messages, tweets, and Instagram posts about the shirt sprout throughout social media, he knew this moment with Betts was different.

“I was very happy Mookie felt inclined to stand on this message on such a big platform,” Lynch said. “The idea wasn’t to go viral, but the idea was to get reaction … and to get the conversation going.”