Can the U.S. men break a 4×100-meter relay curse at the world championships? 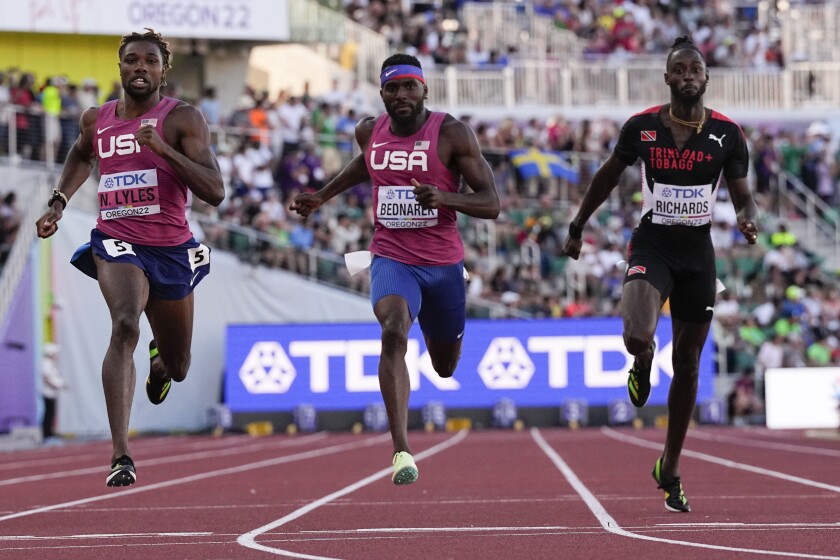 One year after largely being shut out from the Olympic medal podium, the United States’ men’s sprinters have enjoyed a banner world track and field championships.

They swept gold, silver and bronze in the 100 meters for the first time at a world championships in 31 years.

On Thursday, three from the U.S. toed the line in the 200-meter final.

And still, U.S. track and field’s leaders cannot yet relax. Because the event that has caused the U.S. team more anxiety than any other in the last two decades is still yet to be run.

It is one of track and field’s most enduring paradoxes: The U.S. regularly produces many of the world’s fastest men but it just as consistently produces some of the most head-scratching results in getting four of them to pass a baton cleanly around the track. The result is two decades’ worth of botched handoffs, dropped batons, a doping ban that annulled an Olympic silver and what observers, including U.S. sprint icon Carl Lewis, has called lacking leadership.

Victorious in seven of the first 11 outdoor world championships through 2007, the U.S. has won just once since, in 2019, in addition to two silvers.

Even their rare moment to celebrate, at the 2019 world championships in Doha, almost didn’t happen. The U.S. men were too close to one another during their first handoff in qualifying, leading to some bumping, only to be too far away on their last exchange, with Mike Rodgers needing to call out to Cravon Gillespie, who turned around to grab the baton in time. Canada filed an unsuccessful protest that the passing had occurred outside the allowed zone.

The frailty of their qualifying, and the event’s ominous history, was why after anchor-leg Noah Lyles crossed in first in the final, he said the U.S. had not only run 37.10 seconds, the third-fastest time in history, and won the first Olympic or world championships gold in 12 years, but broken “the curse, a generational curse, and bring on a new era.”

That new era lasted two years. A botched handoff between Fred Kerley and Ronnie Baker kept the U.S. from qualifying during the Tokyo Olympics.

“I think last year left a salty taste in everybody’s mouth who was part of it,” said Christian Coleman, who ran the opening leg on the 2019 gold-medal team, in May.

On Twitter, Lewis called the failure in Tokyo “a total embarrassment, and completely unacceptable for a USA team to look worse than the AAU kids I saw.” Lewis, who claimed gold medals in the short relay in the 1984 and 1992 Olympics and the 1983, 1987 and 1991 world championships, later pinned blame on systemic problems with U.S. track leadership.

“You have got look at what’s best for the athlete,” he said in a television appearance, “and often times we let politics get in, agents get in and people from the outside get in.”

Countries that have produced consistent success in the 4×100 relay such as Jamaica, Great Britain, Japan and Canada pull from a smaller pool of elite sprinters, which creates more practice time, chemistry and trust — and, often, medals. The U.S. relay pool is determined after the U.S. championships, and the country’s sheer amount of speed can act against it, with the makeup of the top six-to-eight sprinters changing dramatically from one year to the next.

“If you don’t have a team with real chemistry, things can go wrong,” said Ato Boldon, the NBC Sports commentator and former Olympic medalist. “I remember Usain Bolt saying one time, something goes wrong in every 4-by-1, but the Jamaicans handle things that happen in the race better than the Americans. I thought yeah, that’s harsh but it’s true.”

It’s a byproduct, several U.S. sprinters said, of having typically only a handful of practices together. Making matters more complicated, determining which sprinters are on the ‘A’ team and run each leg is a process rife with internal politics, with sponsorship and clout all factors, said Boldon, who has attended past “relay camps” held by the U.S. before major championships.

Several U.S. sprinters suggested adopting a selection system that would reduce the relay pool’s turnover and allow for more practice time. Noting that he, Lyles and Kerley all train near one another in Florida, Bromell wondered aloud: “Why aren’t we practicing?”

“We get a lot of flak from the world,” said one U.S. sprinter, who requested anonymity to discuss the matter because he feared reprisals. “The only way for us to really show our dominance in the sport is to have a different selection process for relays and then figure out a way to practice them. They don’t have to be the fastest four people — the most consistent people. Maybe you have eight people and figure out how to create a cohesive team with those people.”

“You just got to put more focus and energy into practicing, really, that’s all it takes,” Coleman said. “We got the most talented guys in the world and of course we got top-notch speed.”

Considering the strength of the U.S. performances in Eugene, the energy from running on its home track and the fact that Jamaica is no longer at its world-beating best, anything less than U.S. gold in the 4×100 relay this week should be considered a “huge disappointment,” Boldon said. The U.S. will be under pressure, but it should win, he said.