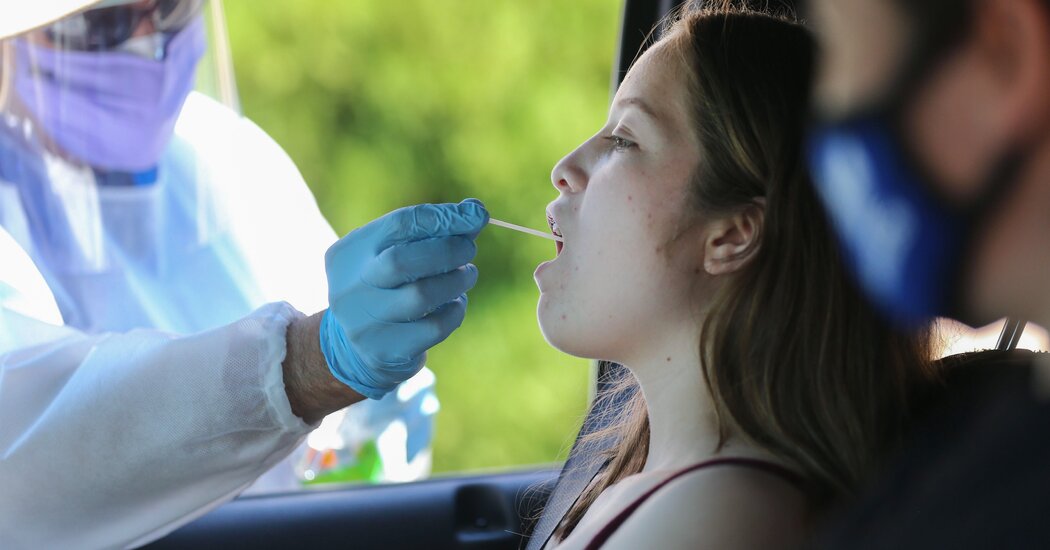 People with coronavirus infections of the Omicron variant often have significantly different viral levels in their noses, throats and saliva, and testing just a single type of sample is likely to miss a large share of infections, according to two new papers, which analyzed Omicron infections over time in a small number of people.

The papers, which have not yet been published in scientific journals, suggest that coronavirus tests that analyze both nasal and throat swabs would pick up more Omicron infections than those that rely on just a nasal swab. Although these combined tests are common in other countries, including Britain, none are yet authorized in the United States.

“You could get a lot more bang for your buck if you use these mixed specimen types,” said Rustem Ismagilov, a chemist at the California Institute of Technology and the senior author of both papers. But in the United States, he said, “we are stuck with nobody doing it.”

Both papers are based on data collected during a study of household coronavirus transmission conducted in the Los Angeles area between Nov. 23 and March 1, when Omicron was spreading rapidly. In total, 228 people from 56 households participated.

Every day for about two weeks, each participant collected nasal and throat swabs, as well as a saliva sample. The researchers performed P.C.R. testing and calculated the viral load, or level, in each specimen.

The first paper focuses on 14 people who enrolled in the study before or at the same time that their infections began, allowing the researchers to capture the earliest stage of infection.

This group of participants provided a total of 260 nasal swabs, 260 throat swabs and 260 saliva samples over the course of their infections, allowing the scientists to make multiple comparisons between the amount of virus in different specimens and people at different times.

The researchers found significant differences in the viral load of different sample types from the same individuals.

In most participants, the virus was detectable in saliva or throat swabs before it was detectable in nasal swabs. “You can have very high, presumably infectious, viral loads in throat or saliva before nasal swabs,” said Alexander Viloria Winnett, a graduate student at Caltech and an author of the paper.

(Other studies, including one conducted by the Caltech team in late 2020 and early 2021, have also found that coronavirus levels tend to rise in saliva before the nose. “So, that feature at least doesn’t seem to be specific to Omicron,” Mr. Viloria Winnett said.)

But later, when the viral load did spike in the nose, it rose to higher levels, on average, than in either of the oral samples, the researchers found.

Even then, however, there was significant variability. For instance, one woman had sky-high levels of virus in her throat throughout her infection, while the viral levels in her nose repeatedly flipped back and forth between detectable and undetectable over the course of more than a week. On the other hand, another participant had consistently higher viral loads in his nose than in his throat or saliva, even from the earliest days of his infection.

Because of this variation, during the first four days of infection, “no single specimen type” will reliably catch more than 90 percent of infections, even with a highly sensitive P.C.R. test, the data suggests.

Focusing on a single sample type means “really missing out on a large part of the picture,” said Reid Akana, a graduate student at Caltech and an author of the study.

Overall, the patterns in the viral loads in the nasal and throat swabs were more dissimilar than any other specimen comparison. Whether people are using P.C.R. or antigen tests, during the first four days of infection, testing both of those sites at the same time would detect significantly more infections than either alone, the data suggests.

In the second paper, the researchers assessed the performance of the Quidel QuickVue At-Home antigen test, which uses a nasal swab, in a subset of 17 participants who enrolled in the study early in the course of their infections. All of the participants took daily antigen tests, in addition to providing daily nose, throat and saliva samples.

The researchers found that even when people had viral loads high enough to be considered infectious in at least one type of specimen, the antigen tests were positive just 63 percent of the time — a performance gap that they attribute to the fact that the tests only measure the virus in the nose, when people might have high viral loads elsewhere.

Test manufacturers will need to make sure that tests designed for the nose still work in the throat, the scientists said; it’s possible that some may not, they cautioned. But they urged companies and regulators to prioritize this research.

“If they can validate their existing tests with a combination swab, we could be catching so many more infections than we are now,” said Natasha Shelby, the study administrator, who is also an author on both papers.