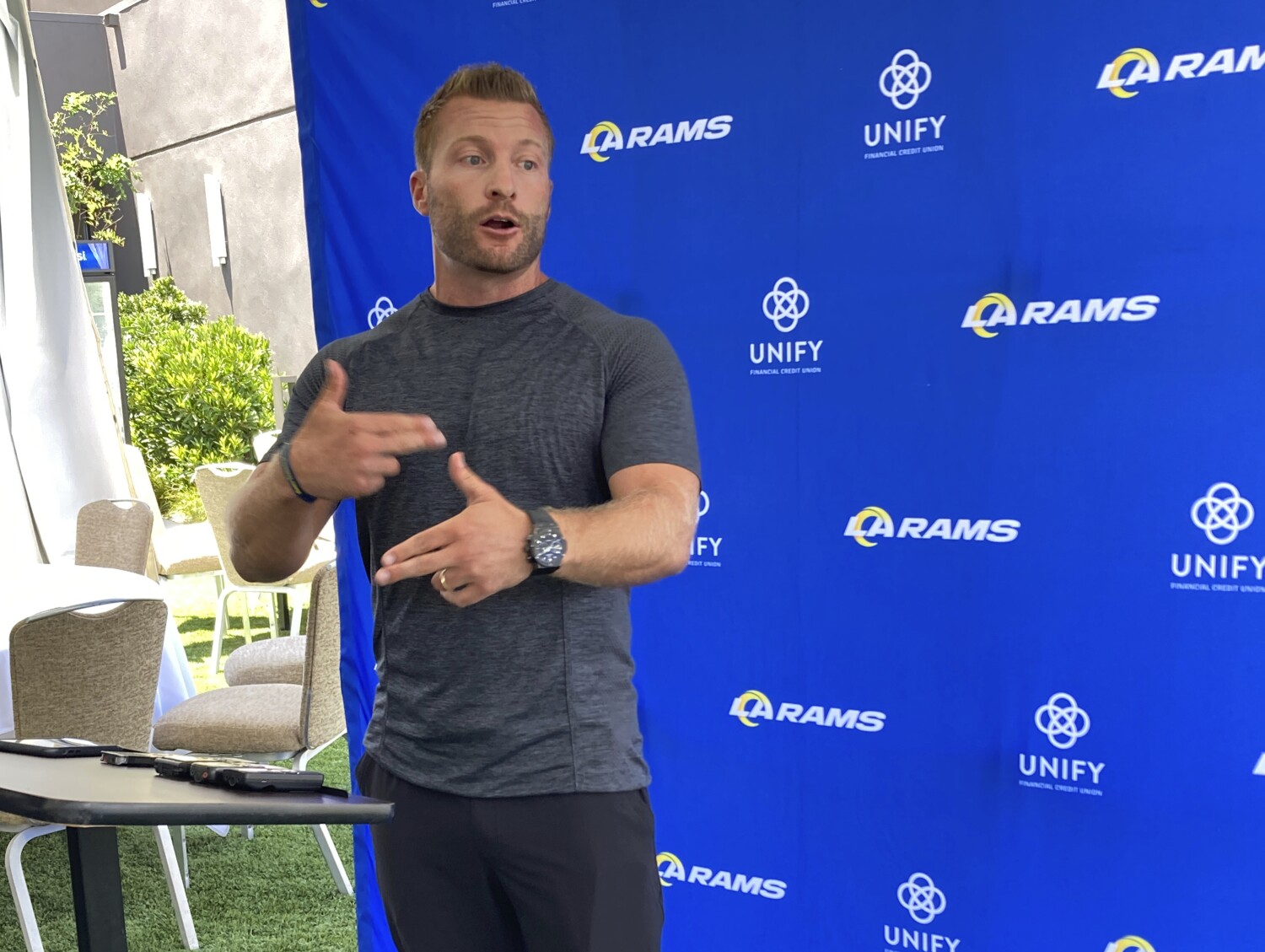 Sean McVay on Friday sported a new ring on his finger, but it was a wedding band and not the humongous Super Bowl ring the Rams coach received the previous evening.

“It’s like wearing a trophy,” McVay said of the diamond-studded Super Bowl ring during a news conference in Newport Beach. “So, this is something that you’ll always cherish, but I don’t know how often we’ll be able to wear it.”

McVay, married in June, appeared fit and refreshed as he prepared for the arrival of Rams players Saturday. This will be McVay’s sixth training camp with the team that hired him in 2017 at age 30.

The Rams have made two Super Bowl appearances during McVay’s tenure.

Kevin Demoff, the Rams’ chief operating officer, said in March that McVay and general manager Les Snead were “the architects of this run” and that both were in line for contract extensions after the Rams completed a boom-or-bust season by defeating the Cincinnati Bengals in Super Bowl LVI at SoFi Stadium.

McVay and Snead both have two years left on extensions they signed in 2019 after the Rams played in Super Bowl Llll.

“We’re in a good place,” McVay said when asked about the status of an extension that is expected to make him one of the highest-past coaches in the NFL, if not the highest.

Asked whether he anticipated the Rams would have the two deals completed before the season opener, McVay said he “wouldn’t want to put a timetable” on it but that it was “more than likely” to happen.

“But then again, these things can kind of drag on, as we all know,” he said. “But I do feel really good about the direction and all the conversations that have been had as it relates to myself and Les.”

No NFL team has repeated as Super Bowl champion since the Patriots in the 2004 season.

McVay cited the competitive balance of the NFL.

“So many things have to go right,” said McVay, whose team opens the season Sept. 8 at home against the Buffalo Bills. “Like, we could be a better team this year, and I think we’ve got a chance to do that, and it might not mean we win a Super Bowl.”

McVay said he was not concerned about a so-called Super Bowl hangover.

“I don’t think that had anything to do with guys not wanting to do it the right way,” he said of the 2019 season. “We just didn’t come up with the right results.”

To return to the Super Bowl, the Rams will need another strong season from quarterback Matthew Stafford, who in March signed a contract extension that includes $120 million in guarantees, according to overthecap.com.

Last season, despite a nagging arm issue, the 13-year veteran passed for 41 touchdowns. After the season, Stafford received an injection in his right arm. He did not throw passes during the Rams’ offseason workouts or minicamp.

McVay said Stafford would be a full participant when the Rams begin practice Sunday.

“You want to be smart with following some pitch counts and different things like that, but he’s going to be ready to go,” McVay said.

Cornerback Jalen Ramsey will begin training camp on the physically unable to perform (PUP) list. Ramsey, a three-time All-Pro, played through shoulder issues last season and had left shoulder surgery in June after participating in minicamp.

“Attack the rehab the right way and, most importantly, be ready for Sept. 8 ready to go,” McVay said of Ramsey’s post-surgery approach. “So, we’ll be smart about that progress for him.”

Linebacker Travin Howard, rookie running back Kyren Williams and safety Quentin Lake also will be on the PUP list. … The Rams will practice Sunday, Monday, Tuesday and Wednesday. The first of 11 workouts open to the public will be July 29.