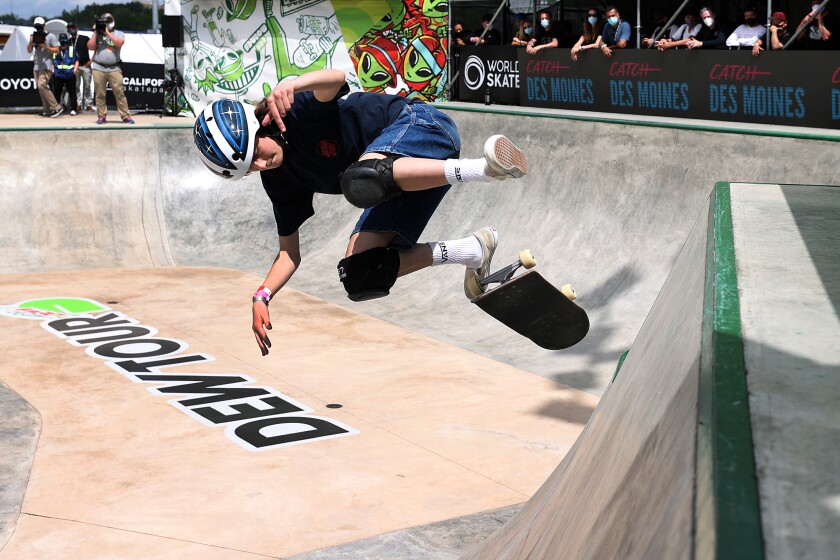 She skates like the sound of a slick Britpop song.

Blur’s “There’s No Other Way” was released 15 years before 16-year-old Minna Stess entered the world, but her mother says its punchy guitar, infectious tambourine dance beat and cool ethos embody the skateboarding phenom’s movement around the park.

The 2021 USA Skateboarding national champion in women’s park skates so smoothly that last summer, she was selected as an alternate for the Tokyo Olympics at just 15. So smooth, Stess’ mother Moniz Franco says it’s hard to detect the sound of the skateboard wheels scraping across the surface when she performs tricks on the halfpipes. Judges at the 2022 X Games will hear that Blur track as they witness the skater compete in the women’s park competition Saturday at the California Training Facility in Vista. Stess placed fourth in last year’s women’s park event.

“It’s like a big bowl or big pool, basically,” Stess said. “And you have to figure out how to skate all of it in a 40-second run without falling and doing hard tricks. It’s a lot.”

Still, no park compares to the one back home in Petaluma, a town 30 miles north of San Francisco. Phoenix Theater boasts just a couple ramps, but it’s where Stess attends hardcore shows like her mother did in her youth and where her older brother, Finnley, went before introducing his family to skateboarding.

Her parents thought their kids would be musicians.

In 1991, the same year the English band dropped “There’s No Other Way,” Stess’ father, Andrew, moved from the East Coast to Petaluma in search of the ‘90s version of the San Francisco sound. There he met Stess’ mother, a fellow music nerd and East Coaster.

Legendary rock band the Who played at that venue in Petaluma in the ‘60s. Decades later, Stess would build her own legend in a sport that has seen an increase in female participants. She’s the smiling, diaper-clad toddler on the skateboard in a clip featured in Candace Parker’s recent Title IX documentary. She competed in her first local contests at age 5.

“Every park I’m at, there’s always a girl there, which is amazing,” Stess said. “And I think it’s becoming a norm now, which is good, because it should be a norm.”

Stess prefers skating in the Bay Area. Now that she is older, her parents have started letting her take the ferry into the city with her friends to skate into the air and catch that weightless feeling she loves so much.

Stess is still their little girl, though.

Her father remembers the piercing screams. In 2018, Stess broke and dislocated her elbow — the worst injury of her career.

“I was watching her land this trick over and over again until she didn’t,” her father said.

Stess’ parents know how dangerous skateboarding is. They’ve come to accept their daughter will get banged up, but that doesn’t reduce the anxiety they feel watching her compete.

Even with her apt skater name, Stess isn’t necessarily fearless.

For her protection, Stess wears knee pads, usually with a pair of Vans sneakers and jean shorts. Her personal style already fit the skater mold — girly clothes weren’t her thing. Stess scratches her head at some of her past outfits, but she’s still a teen. Still evolving.

Her father says the best is yet to come in her prolific skating career, but he thinks she’s an even better person than she is an athlete. Stess uses her social media accounts to express herself and share what she believes in, but she said she’s only 16 and is still developing a voice in that sense.

Her parents say they don’t have to keep Stess grounded because she does that herself.

“She doesn’t go to a skate park and say ‘Look at me,’” her father said. “She just wants to be out there skating.”

This is not to say Stess doesn’t tell it like it is. Her father jokes that the East Coast spirit has awakened in their West Coast kid as she’s gotten older. She’s sassy and steezy and unapologetic wrapped in one.

That’s what makes skateboarding special to her.

“It’s something that you can do in your own way,” Stess said.

Her mom says Stess skates like a Blur song, but lyrically speaking, Estelle’s “Do My Thing” — its message oozing confidence — truly captures her daughter’s energy as she pushes for an X Games title and a ticket to Paris in 2024.