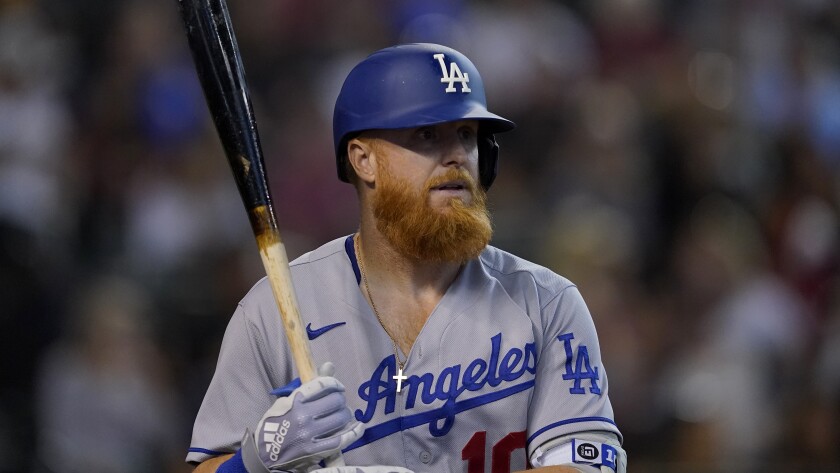 Exactly six weeks removed from suffering a flexor tendon strain in his right elbow, Walker Buehler is finally scheduled to pick up a baseball again on Monday.

The right-hander said he will play a light game of catch Monday, in what will be his first time throwing since going down with the injury — and later having an operation to remove an unrelated bone spur in his elbow — in June.

“[It will be] about as light as catch can be,” Buehler said with a laugh. “Part of me felt like six weeks have gone by really quick. Part of me feels like it’s taking forever.”

With 2½ months remaining in the regular season, the clock is indeed ticking.

Right now, Buehler is on track to return to game action in mid-to-late September, which the team hopes will give him enough time to get fully stretched out and be ready to take on a normal workload for their likely postseason appearance.

“The last thing I want to do is go two innings on 40 pitches and have to come out of games,” Buehler said. “I don’t want to be a starting pitcher unless I can be a starting pitcher. So we’ll see how that goes. But I think there’s some window, there’s an opportunity for that if things go really well.”

Even the slightest setback, however, could force Buehler and the Dodgers to make some decisions about his October usage.

Buehler indicated Friday that, if he’s not fully stretched out for the playoffs, he’d be willing to serve roles other than a traditional starter.

“If things don’t go perfectly and I end up being a guy that can help us get outs in the playoffs, that’s what I’ll be,” Buehler said. “I think that would be fun too. I don’t think that’s the biggest letdown in the world.”

He added: “Take kind of a bird’s eye view of this thing, and I want to be healthy and contribute for a lot of years. And this year is obviously the most important. So I’m gonna do anything I can to get back and contribute as much as I can.”

Buehler doesn’t believe the Dodgers’ title chances rest solely on his shoulders — or elbow — noting that he’s just one of several other pitchers working their way back from injuries, along with Dustin May, Danny Duffy and Andrew Heaney. Buehler is even waiting to see if top pitching prospect Bobby Miller can work his way to the big leagues by then.

“We’ve got a lot of guys that are probably going to be around for the playoffs,” he said.

Still, no one in the organization has as much proven talent and postseason pedigree as Buehler, even after he started this season with a 4.02 ERA in 12 starts prior to getting hurt.

“As each passing week goes by, it’s kind of where we’re at and we’ll decide the utility of Walker,” manager Dave Roberts said. “But the hope is that he’ll be ready and continue to build up to the postseason.”

Monday’s session of catch will be his biggest step yet.

“Part of me wants to kind of not try and feel anything,” Buehler said. “But I know myself. I think throwing to feel healthy and to get healthy is a different deal than trying to be perfect and be something I was a year ago or something I was three years ago, whatever.

“So I think just go and throw and try to be athletic for a while and kind of hope that that leads to that feeling I was kind of hunting for.”

After exiting Thursday’s game early with abdominal tightness, Justin Turner was not in the Dodgers lineup Friday.

The third baseman said he was doing better and the Dodgers said they don’t believe he’ll have to go on the injured list. But Roberts said Turner would be unavailable Friday and could need another two to three days before going back in the lineup.

Turner said he first felt some discomfort near his ribs while taking practice swings on deck during his third at-bat Thursday night.

He said it was a different sensation from oblique and intercostal injuries that he’s experienced in the past, and described his current restrictions as more of a precaution.

“I’m calling it a little gremlin in my ribcage,” Turner joked. “Just going to try to treat it for a day or two and hopefully be good to go.”

Brusdar Graterol (shoulder inflammation) has resumed throwing up to 90 feet, though his return remains unclear … Dustin May (Tommy John surgery) pitched two innings in a rehab start with triple A Oklahoma City, hitting 99 mph with his sinker.