It takes a unique set of skills to play the Predator; meet ‘Prey’ star Dane DiLiegro 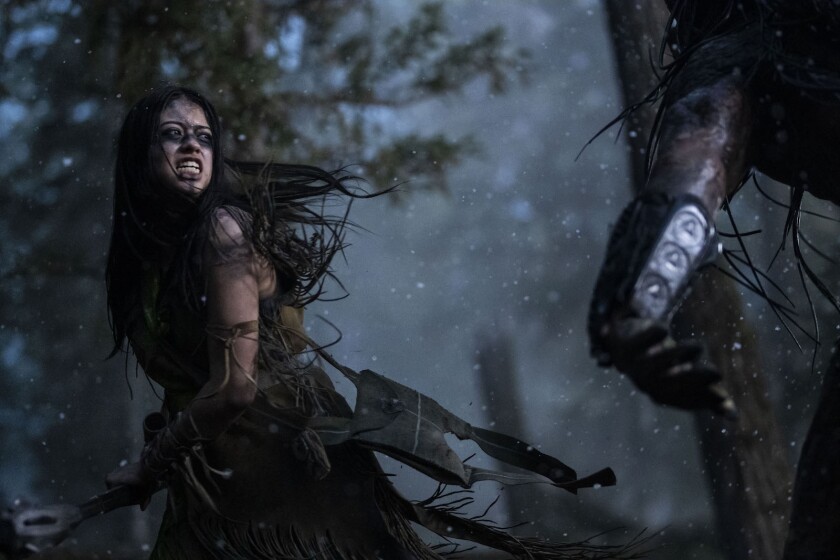 Dane DiLiegro’s hands are as meaty as beefsteaks. He could hold an entire deck of cards — fanned out — without anyone seeing them.

“They’re butcher’s hands” offered Dario Cecchini, an eighth-generation butcher in Tuscany, where DiLiegro has deboned cattle pretty much every summer since 2016. And those hands cradled a basketball like a protective father during the eight seasons in which DiLiegro played professional hoops overseas.

Lately, his hands tend to be swathed in rubber gloves, sometimes balled into fists the size of honeydew melons, sometimes enhanced with 4-inch talons that would make Barbra Streisand envious. DiLiegro has quickly become one of Hollywood’s top “creature actors.” Sheathed in form-fitting, foam-and-latex get-ups, he appears on-screen in the guise of ghouls, space aliens and whatever a screenwriter can dream up. It’s an inside job for which he’s particularly well suited.

Having already amassed credits including “The Walking Dead” and “American Horror Story,” DiLiegro now has the lead — or more accurately, the featured creature — in the seventh installment of the Predator franchise. Titled “Prey,” directed by Dan Trachtenberg (“10 Cloverfield Lane”) and starring Amber Midthunder as the very human heroine, it starts streaming Aug. 5 on Hulu.

Like the monster in the original 1987 sci-fi action horror film, DiLiegro’s Predator is a writhing, heat-seeking extraterrestrial with superhuman strength and the ability to disappear into its surroundings. “I shot the entire movie essentially blind, with my head in the neck of this being,” he said. “In order for the Predator to look forward, I had to stare at my feet through two tiny neck holes. Sticks were laid on the ground so I’d know where to walk or run.”

During one scene, DiLiegro’s fiberglass-and-foam latex pate was accidentally set ablaze. He became aware of this only when the assistant director exclaimed, “I think Dane’s head is on fire!” DiLiegro took it in stride. “It felt like a sort of monster bar mitzvah for me,” he recalled. “A rite of passage for all creature actors.”

The 34-year-old DiLiegro is not the kind of actor who can be hired to play in the background of a scene: he can’t blend into a crowd shot. He stands 6 feet 9, which makes him one of the biggest stars in Hollywood and a man who dominates every scene. Since arriving in Los Angeles two years ago with no acting experience, the slender, loose-limbed native of the Boston burbs has played otherworldly grotesqueries in half a dozen movies and TV shows.

DiLiegro follows in the thunderous footfalls of such immortals as 5-foot-11 Boris Karloff, the monster in “Frankenstein” (1935), and 5-foot-6 Haruo Nakajima, the quintessential baby boomer in “Godzilla” (1954) and 11 sequels. His personal horror pantheon includes 6-foot-2 Kane Hodder — best known for his portrayal of supernatural serial slasher Jason Voorhees in the “Friday the 13th” series. One of DiLiegro’s most treasured childhood keepsakes is a plastic knife that Hodder autographed for him at Spooky World in Foxboro, Mass.

Professional creature performing is one of the most esoteric careers in show business. DiLiegro’s voice is seldom heard and his face, encased in masks or obscured with prosthetic makeup, is never seen. “A lot of times the people in the production department think they can just stick a stuntman in there and all will be groovy,” he said, skeptically. “But a creature actor is very much an actor.”

Despite the cumbersome rubber suit, he must express a varmint’s essence through a profound nonverbal interpretation, exuding a sense of great strength while broadcasting pure emotion. “You’re telling your story with your shoulders, your posture, the way you’re walking, the way you’re moving,” DiLiegro said. “In some ways it’s more difficult than speaking.”

For an actor to create the breadth of a monster’s personality — masquerading in layers of latex from the top of his head to the tip of his occasionally webbed feet — takes hours of prep work and no bathroom breaks. “You have to learn to live in discomfort,” DiLiegro said. “You’re glued into suits that are hot and heavy and absorb your sweat. You’re sitting and standing in them for up to 12 hours. It gets itchy and numbing and restricting. If the heat and the weight and the unpleasantness doesn’t get you, the claustrophobia probably will.”

To bear the weight of a 65-pound suit and 40 pounds of animatronic equipment, he’s got to stay thin and robust. Slipping into the skin of one space invader required him to lower his percentage of body fat from 18 to eight. “How did I do that? Diet, exercise, lots of hikes and bikes. Limited caloric intake. Stopped eating breakfast.”

The mild-mannered DiLiegro has firm opinions about everything from meat-cutting to the resplendence of the Boston Red Sox. He’s also something of a philosopher, expounding endlessly on the Zen of lifecasting. “I find it to be a little therapeutic, especially when my face is covered with a silicone-and-plaster shell,” he said. “You just sit there and you’re completely confined and it’s warm and kind of meditative. Other people might freak out: the process involves a lot of breath control.”

He took a serpentine path from Beantown to Tinseltown: the 3,000-mile trip snaked through New Hampshire, Sardinia, Israel, the Italian cities of Ostuni, Trieste, Siena, Verona and Forli, and several other towns too obscure to mention. It turned out to be a 12-year trek.

DiLiegro was raised, if not spawned, in Newton, Mass., the youngest son of a Nike account manager and a wedding invitation calligrapher. “As a kid, I’d prowl around my house on all fours, like a beast,” he said. “I was always hungry and stuffing food in my mouth as fast as possible. My mom would say, ‘You eat like a wild animal.’” Nowadays he tends to use a knife and fork.

He grew up in Lexington. And grew. And grew. He got serious about basketball only at age 15 and despite his height didn’t make the varsity of his high school team until his junior year. “Coming up through public schools, I never really cared much for sports,” he says. “And to be honest, I was never really that good at them.”

By the time the University of New Hampshire offered DiLiegro a hoops scholarship, he was 6 feet 7 and 235 pounds. Nicknamed Psycho D for his manic focus, he graduated as the school’s second all-time leading rebounder. He might have been first if he hadn’t drawn a three-game suspension as a senior for using a fake parking pass.

Passed over in the 2011 NBA draft, he headed to Europe to play pro ball. He signed a series of one-year contracts with teams in Italy (his father’s grandparents were from Gaeta and Canosa di Puglia) and Israel (his mother is Jewish). “I was a rebounder, a defender, a screen-setter,” he said. “I was the blue-collar guy who did the dirty work, kept his mouth shut and accepted the fact that his job was to make the stars look good. Bringing that athlete’s mentality to acting has been extremely helpful.”

When not on the court, he learned to speak fluent Italian and filmed a web series called “Adventure Monday.” “I’d explore the Italian countryside, stumble upon interesting restaurants and interview the chefs,” DiLiegro said. “The idea was to create content so that I could eventually host a culinary travel TV show.”

A 2016 installment of “Adventure Monday” centered on Antica Macelleria Cecchini, a 246-year-old butcher shop in the hilltop town of Panzano in Chianti. The owner, Dario Cecchini, fell in love with DiLiegro’s hands and invited the baller to stay with him during the off-season. By day, DiLiegro deboned bovines on a chopping block in Cecchini’s commercial establishment. By night, he waited tables in Cecchini’s steakhouse. “Butchering was kind of a tradition in my family,” DiLiegro said. “My mother’s father, Al Moll, once owned a kosher meat market outside Boston.”

During the summer of 2019, while home in Lexington training for the upcoming Italian season, DiLiegro got a phone call from a casting agent who wanted him to be a stand-in in the Ryan Reynolds comedy “Free Guy.” DiLiegro drove down to the set in Boston the next day.

During a break in the action, the film’s supervising stunt coordinator, Chris O’Hara, told DiLiegro that he had all the makings of a creature actor. He noted that there were only a handful of performers in Hollywood with DiLiegro’s build, flexibility and athleticism, and that they got nearly all the monster parts. “Chris warned me that the work is cramped, unpleasant, you can’t go to the bathroom and you struggle to move,” DiLiegro said, “but you’re paid the SAG rate and you get to be in movies.”

The following week DiLiegro flew to L.A. to pitch his food show, look at apartments and check out a couple of special effects shops. His break came a week later when he heard about a Netflix show called “Sweet Home” that was about to be shot in Korea. He landed a gig as a stunt double for the creature actor hired to inhabit a bodybuilding mutant named Muscle Monster. When the actor dropped out, DiLiegro stepped in.

The role led to a turn as Halo’s Master Chief in Xbox ads, a walker in “The Walking Dead,” the fertility demon Ba’al in the FX anthology “American Horror Story,” Bigfoot in Blink-182 frontman Tom Delonge’s upcoming feature “Monsters of California” and the forest fiend Dragio in the competition series “The Quest” on Disney+.

With the Predator, he takes on arguably his most iconic creature role yet. “I love being these monsters and creatures,” DiLiegro said. “When I get into character, I truly believe that I’m no longer human and have become invincible. It’s an indescribable feeling.”

Still, DiLiegro aspires to someday shed his second skin, play a member of his own species and transcend the world of comic book geekdom. “No, I don’t long to play Hamlet,” he said. A pause. “On the other hand, James Bond …”